I have read many books by Philippa Gregory through the years so when the publisher offered her latest, Tidelands to me at no charge for my honest review I was happy to accept. 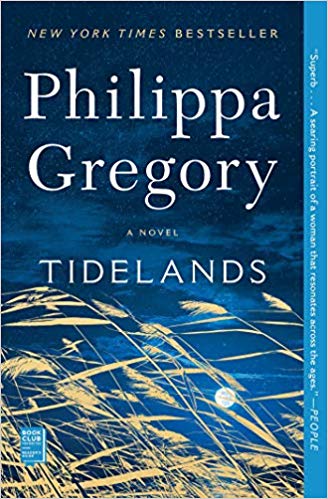 On Midsummer’s Eve, Alinor waits in the church graveyard, hoping to encounter the ghost of her missing husband and thus confirm his death. Until she can, she is neither maiden nor wife nor widow, living in a perilous limbo. Instead she meets James, a young man on the run. She shows him the secret ways across the treacherous marshy landscape of the Tidelands, not knowing she is leading a spy and an enemy into her life.

England is in the grip of a bloody civil war that reaches into the most remote parts of the kingdom. Alinor’s suspicious neighbors are watching each other for any sign that someone might be disloyal to the new parliament, and Alinor’s ambition and determination mark her as a woman who doesn’t follow the rules. They have always whispered about the sinister power of Alinor’s beauty, but the secrets they don’t know about her and James are far more damning. This is the time of witch-mania, and if the villagers discover the truth, they could take matters into their own hands.

Philippa Gregory is the author of many New York Times bestselling novels, including The Other Boleyn Girl, and is a recognized authority on women’s history. Many of her works have been adapted for the screen including The Other Boleyn Girl. Her most recent novel, The Last Tudor, is now in production for a television series. She graduated from the University of Sussex and received a PhD from the University of Edinburgh, where she is a Regent. She holds honorary degrees from Teesside University and the University of Sussex. She is a fellow of the Universities of Sussex and Cardiff and was awarded the 2016 Harrogate Festival Award for Contribution to Historical Fiction. She is an honorary research fellow at Birkbeck, University of London. She founded Gardens for the Gambia, a charity to dig wells in poor rural schools in The Gambia, and has provided nearly 200 wells. She welcomes visitors to her website PhilippaGregory.com.

I have read many of Philippa Gregory’s books as I enjoy historical fiction and English history is a particular favorite. Tidelands is a bit different in that instead of dealing with royalty the main female character is a poor woman living in a village in an area known as the Tidelands; dependent on the sea and dangerous to traverse if you didn’t know where to walk. Her name is Alinor and she lives with her two children in a state betwixt and between as her husband went out to sea to fish and he never came back. She doesn’t know if he is alive or dead so she has no husband present nor can she call herself a widow. Alinor is a midwife and healer as was her mother before her but rumors fly in a small place and some think evil thoughts about a beautiful young woman without a husband.

One night as she finds a man sneaking across the land and knows he does not belong. She helps him and gives him a place to rest and this small favor changes the course of her life in so many ways. It’s a dangerous time to be helping strangers as the country is still trying to settle from the civil wars that have led to King Charles I being held prisoner and the Parliament presenting demands for him to change how he rules.

As Alinor’s favor rises with the local lord there are those that attribute it to supernatural means and petty jealousies lead to accusations. There are additional intrigues revolving around Alinor’s daughter and her son and all the stories weave together to a shocking end.

As with all of Ms. Gregory’s books the research is evident in many ways; from the detail in the description of the lives of the people in the village to the details of the politics of the time. The conflict between the high born priest and the lovely Alinor made for an interesting dynamic and like today the difference between the haves and have nots is stark. It’s a book that kept my interest and I am very much looking forward to the second volume so as to see how the story continues. It was not an easy time in history for the common man (or woman) so it is fascinating to have a series focus on a character like this.