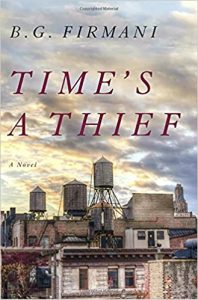 About Time’s a Thief:

Francesca “Chess” Varani is an ultra-bright, sassy, but vulnerable Barnard freshwoman from a blue-collar background in the vibrantly gritty New York City of the mid-eighties. She strikes up a volatile and somewhat toxic friendship with drama-queen classmate Kendra Marr-Löwenstein, and falls into the bewitching orbit of her Salingeresque, high-toned family. Upon graduation, she moves into the Marr-Löwenstein house in the West Village as a secretary/girl-of-all-work to the soignèe literary intellectual Clarice Marr (think Susan Sontag but blondly coiffed and dressed in Chanel) and receives the sentimental education and emotional roughing up New York bestows on all of its new arrivals—including a love affair with Clarice’s glamorously damaged son, Jerry.The story is related by Chess in sadder but wiser fashion from the distance of a financially beset 2008 and the depths of a crap job taken of necessity, tinged with the poignancy of time and choices made and not made.

B.G. Firmani’s debut novel, Time’s a Thief, was published by Doubleday in May 2017. She has published fiction in the Bellevue Literary Review, BOMB, The Brooklyner, the Kenyon Review, the Michigan Quarterly Review, Painted Bride Quarterly, Philadelphia Stories, and Word Riot. She is a graduate of Barnard College and Brown University, has been a resident at the MacDowell Colony and Yaddo, and is a 2012 Fellow in Fiction from the New York Foundation for the Arts. She lives with her husband in New York City and lately has had no time at all to write her blog about Italian-American literature and folkways called Forte e Gentile.

I was intrigued with the synopsis of the book as it returned me to one of my favorite cities and to a time period I remember well. I can’t say that I could relate to much else as I did not go to a college in the city, I did not take drugs and I certainly was not, nor am I currently rich.  The job of a writer is to take the reader into a world and hopefully immerse them in a way that they forget their current reality and they live, at least for a while, within the two covers. There were hints of that in Ms. Firman’s writing; she certainly has a way with words. At some junctures in the book I would reread a sentence because it was just so beautifully written.

The story was not one I understood on any level. I could not grasp why Francesca was so drawn to these awful, awful people. Anyone with a modicum of intelligence would have run quickly in the opposite direction and yet she kept going back. It boggled my mind. I wanted to slap her.

The book was also full of references to designers, New York landmarks, obscure books and other name dropping that if the reader wasn’t aware of these things it would, I think make for jarring reading. I was familiar with New York and I read a LOT so I knew most of the references. I will admit that the name dropping got old after a bit.

Overall the city of New York was a stronger character than any of the humans in play. The book was diverting but I found it more frustrating than fascinating. It’s definitely a character driven novel and when you as a reader can’t understand the motivations of the main character you are going to have trouble with the book. I’ve seen others who loved it. And that is the glory of reading; one person’s great book is another’s not so great.