To Catch a Falling Star by Anna Belfrage – Book Review

I was very happy to accept a free copy of Anna Belfrage’s latest book from Historical Fiction Virtual Book Tours at no charge. To Catch a Falling Star is the next volume in the Graham Saga. 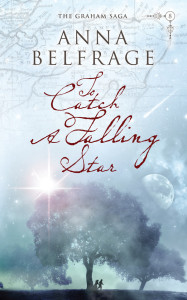 About To Catch a Falling Star:

Some gifts are double-edged swords …

For Matthew Graham, being given the gift of his former Scottish manor is a dream come true. For his wife, Alex, this gift will force her to undertake a perilous sea journey, leaving most of their extensive family in the Colony of Maryland. Alex is torn apart by this, but staying behind while her husband travels to Scotland is no option.
Scotland in 1688 is a divided country, torn between the papist Stuart king and the foreign but Protestant William of Orange. In the Lowlands, popular opinion is with Dutch William, and Matthew’s reluctance to openly support him does not endear him to his former friends and neighbours.

While Matthew struggles to come to terms with the fact that Scotland of 1688 bears little resemblance to his lovingly conserved memories, Alex is forced to confront unresolved issues from her past, including her overly curious brother-in-law, Luke Graham. And then there’s the further complication of the dashing, flamboyant Viscount Dundee, a man who knocks Alex completely off her feet.

All the turmoil that accompanies their return to Scotland pales into insignificance when a letter arrives, detailing the calamities threatening their youngest daughter in Maryland – at the hand of that most obnoxious minister, Richard Campbell. Matthew and Alex have no choice but to hasten back, no matter the heartache this causes.

Will they make it back in time? And what will Richard Campbell do?

I was raised abroad, on a pungent mix of Latin American culture, English history and Swedish traditions. As a result I’m multilingual and most of my reading is historical – both non-fiction and fiction.

For more information, please visit Anna Belfrage’s website and blog. You can also find her on Facebook,Twitter, and Goodreads.

I am very sorry to see this excellent series reach its end. I suppose it had to happen sometime but I have to admit to being sad to see these characters find the end of their literary lives. Although there is a bit of a teaser at the end of the book indicating the possibility of short stories to come so cross your fingers fans! I’ve read all of the books in the series but the first – although I do have it on my tablet. I just haven’t had the time to read it!

In this book Alex and Matthew head back to where it all began – Scotland. Matthew’s brother Luke is grateful for the saving of his son so he has sent Matthew a letter giving him back the family home. Since Matthew was forced to leave a country he loved he wants to go back to what he considers home. Alex does not want to go. She doesn’t completely trust Luke, she knows the political situation in Scotland is not good and she doesn’t want to spend all of that time on a ship. Of course all does not go as planned while they are there and they soon receive word that danger lurks back in Maryland so they start the journey back to Maryland.

At the heart of all of these tales is family – for good or for bad. Alex has tumbled through time because of her mother’s artwork and that questionable talent has been passed to Alex’s son. He finds himself painting his way to Alex’s time and trying to get back to his own but she has a real disconnect to this first son of time to which she does not belong. It’s an oddity to a character that loves her children so fiercely. For she does love and love strongly – it is what drives her; love for her husband and her children. Without that there really would be no stories.

As with the other books in the series I found myself turning page after page until suddenly there were no more to turn which led to a real letdown. Especially as there will be no more adventures for this couple. Ms. Belfrage can really bring a time period and a world to life and as a reader you find yourself lost in time, much like her protagonist. It’s not a bad thing at all – especially since you can still take a hot shower at the end of the day.