Travelin’ Before the Farm: The US Virgin Islands – St. Thomas and St. John

I mentioned at the end of last year that I had plans to add some new features to the blog. I’ve added Last Week on the Farm and now I’m introducing Travelin’ Before the Farm. I’ve been very fortunate in my life to have been able to visit some beautiful places in this country and in other countries. I’ve been meaning to get this started and someone gave me the push I needed. These tales will be in no particular order but rather appear as the mood strikes me.  Be aware that most of these trips took place in the time before digital photography so I don’t have a lot of photos and by the time they get scanned they are not of high quality.

The US Virgin Islands – St. Thomas and St. John

I can’t remember the exact year we visited the Virgin Islands; I do remember it was after we had been to Hawaii a couple of times. My best guess is that it was 1987/88. We decided to try St. Thomas to see if it was as nice as Hawaii. It certainly was closer – we were living in New Jersey at the time and flying to Hawaii was a very long trip. We negotiated and this trip was going to be a His & Hers Vacation. What does that mean exactly? Well, we were spending 10 days on a sailboat and a week in a bed and breakfast. It was going to be the longest vacation we had ever taken at that point in our lives.

I was not in favor of the sailboat….that was most definitely the His part of the trip. The man LOVED to sail. Me? I got seasick. So you can imagine my joy at the thought of spending over a week seasick. But this was a marriage and whither thou goest and all. 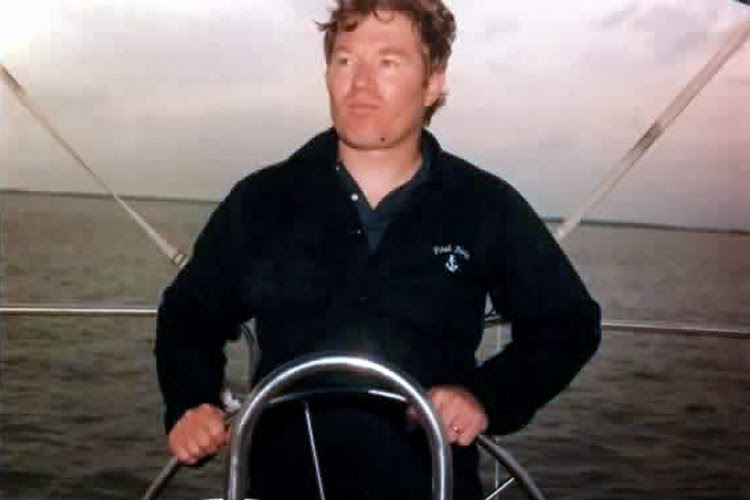 He was ecstatic –  look at him. He was BORN to sail.  I forget how young we were on this trip. His hair is still red. We charted the boat out of Charlotte Amalie and took off into the beautiful waters. I survived. I think if it were up to him we never would have left that boat. I will admit that it was a good way to see the surrounding islands. We found ourselves in a different anchorage each night and could catch a water taxi onto an island for dinner or I could cook onboard. 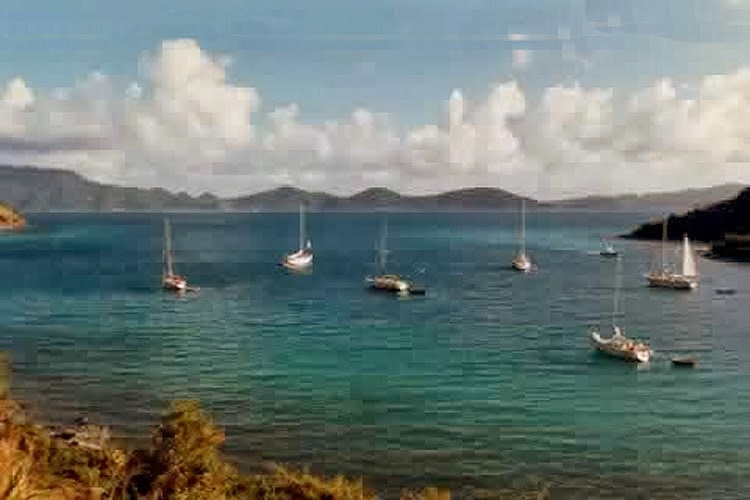 I eventually was able to keep some food down and I did appreciate how pretty it was. We even sailed over to the British Virgins and visited by water. We didn’t disembark. So how was the sailboat section? We were on that boat for 10 days – it rained for 7 of them. In the Virgins. In February. Do you think the travel gods were trying to teach us a lesson? Like don’t take your seasick prone wife on a sailboat for 10 days? I will note that we never chartered another sailboat.  We did have some adventures on our own boat – but those are for another post. When the sun did come out I can write that I remember that the scenery was stunning and the people were amazing.

For my week we stayed in a little bed and breakfast in Charlotte Amalie that was very simple. Whenever we would travel I never looked to spend a lot on accommodations. As long as a place gave me a clean room with a nice bed and a bathroom I was happy. My feelings are you are on vacation to be out seeing the sights, not to be spending time in a room so spend your money elsewhere. Not that I would turn down a fancy room if one were given to me. This place was just fine – it’s no longer in business so I can’t direct you there. This trip was so long ago. On the first day we ended up taking a tour over to St. John and we just fell in love. Most of the island is a preserve so there isn’t much development. For the rest of our stay we would take the ferry over to St. John and spend the day over there. It was unbelievably beautiful; the beaches were pristine and for this part of the vacation the sun was shining. We both took a diving class but the teacher had a deep rooted prejudice against women diving (he admitted it the first day of class!) so while John did just fine and was able to dive the teacher did not have the patience to deal with me. Any need to go back over something and he would yell and scream. Not a good environment for learning.

John went diving a couple of times. I snorkeled and when we came back I did ultimately get my certification – in New Jersey waters. Take that rude dive teacher!

We ate well on St. Thomas. It’s where we both discovered conch. Who knew it could taste so good? It has to be cooked just right and the best way we had it prepared was in a rich garlic butter. It wasn’t chewy and the butter and garlic just made it so good. I think we ate there three of the nights we were on the Island. Sheesh, now I want conch and I’m not going to find it in Montana.

I would be remiss if I didn’t mention the shopping. St. Thomas is, of course, one of the biggest cruise ship stopping points and within walking distance of the harbor there are more shops than I could count. We did wander through them and I saw more diamonds than in any other place than the diamond district of New York. It was the first place I saw a black opal. I fell in love. Amazing stone the black opal. I have wanted one ever since but they are not cheap and I’m not exactly in a world were you wear a fragile gem am I?

I do wish I had more photos to show you but back in those days it was all film. Add in the culling I had to do when we moved into the trailer and I just don’t have that many pictures left. I have the memories of the trips and the joy they brought me. Our trip to the Virgins was one to remember – he enjoyed sailing that big boat around the Caribbean and I enjoyed getting off of that big boat! We ate some delicious food and fell in love with St. John. We did not go back because we did decide that we liked Hawaii better. Even with the long, long flight.