I am very happy to welcome back today Dan Arnsan with his second book, Trevor’s Tank.  I was very happy to share his first book, Sarge’s Shenanigan’s earlier. 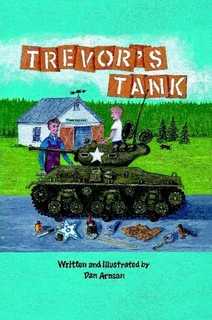 Is there something you’d like to do, but your friends just don’t get it? So what do you do? Do you trudge on alone, or do you just give up on it? After all, if your friends don’t understand, why would anyone? But then someone unexpected comes along. Or was he there all the time? Author Dan Arnsan tells the story of such a dream in his book, Trevor’s Tank. Ten-year-old Trevor is fascinated with tanks. His dream is to build a tank he can drive in the Veteran’s Day parade. It’s a big goal, and Trevor is off to a rocky start. His friends don’t understand his fascination with tanks or why he wants to build one. Trevor quickly discovers his building skills aren’t exactly up to the level needed for such a project. That’s when he accepts help from a lonely neighbor, Mike, who helps him achieve it and deal with other issues along the way. Trevor’s Tank deals with many issues ten-year-olds have. They face bullying and loneliness, especially when their fathers aren’t around.

You can purchase Trevor’s Tank at Lulu.com

Dan Arnsan quit high school, joined the Marines, saw combat in Vietnam, and rose to the rank of sergeant. He retired as a college professor/librarian. Barbara is a retired second grade teacher and accomplished ceramicist. They live with their Flat-Coated Retriever, Sarge, in the mountains of Montana bordering the Lolo National Forest.

Writing and illustrating a book for children has been a dream for the Arnsan’s. Readers won’t see an illustrator listed for Sarge’s Shenanigans because Dan and Barbara collaborated on each page. Dan did the actual illustrations, but Barbara provided key ideas, like the medal concept and the double spread pages. All royalties are going to the Flat-Coated Retriever Foundation’s Cancer Research Fund. So far, the book has raised nearly $2,500.

One lucky US reader will win a copy of Trevor’s Tank. Just enter as many ways as you would like on the Gleam widget below. Full rules are on the widget. Good luck everyone.