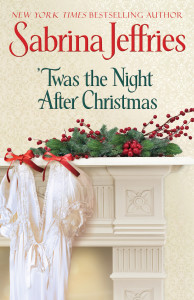 Pierce Waverly, the Earl of Devonmont, has led an unabashed rogue’s life, letting no woman near his heart. Inexplicably abandoned as a child to be raised by distant relatives, he never forgave his parents, refusing to read any of his mother’s letters after his father’s death. Then came a letter that shook his resolve. A Christmas visit to Montcliff might prove his last chance to discover the truth of his past, and come to terms with the stranger he calls “Mother.” But two surprises await him at Montcliff. His mother is perfectly healthy, nowhere near a deathbed, as her meddling lady’s companion led him to believe. The second is Camilla Stuart herself, a lively vicar’s widow, too bright and beautiful not to arouse the scoundrel in Pierce. Though she alone is reason enough to prolong his stay, he is soon faced with other tantalizing riddles: What secrets lie in his mother’s past to explain his childhood abandonment? Why is the captivating Mrs. Stuart so determined to mend the breach between mother and son? Meanwhile, Camilla herself is caught up in love’s complications since the arrival of the irresistible earl. As his bold flirtation and suggestive whispers draw her dangerously close, can anything protect her vulnerable heart? If they are destined to share real happiness, there must be honesty between them—yet telling him the truth about her own life may shatter that chance. None of them can predict the startling revelations to come. Or the secrets, both heartening and shocking, divulged between a mother and son, and between two lovers haunted by their respective pasts, that will make Christmas night at Montcliff one to remember—and the glorious night after, one to treasure for a lifetime.

Sabrina Jeffries has written more than two dozen novels under the names Deborah Martin, Deborah Nicholas, and Sabrina Jeffries. She lives with her husband and son in North Carolina.

A holiday romance to make you smile. Little Pierce was waiting patiently for his brutish father to come bring him home for Christmas where he would get to see his beloved mother. When he is picked up by a relative he barely remember and is told he will be going to his farm and not home Pierce is very confused but assumes he will see his mother later. Little does he know he won’t see he mother for YEARS and it won’t be pleasant when he does.

What follows is a truly entertaining cat and mouse game between our hero and heroine as Camilla – that companion – tries to bring the Earl and his mother together for Christmas. As I have mentioned, every now and then I enjoy a romance novel and this was one to enjoy. The holiday season, the likable protagonists and a little boy in love with the poem, A Visit From St. Nicholas. It all comes together for a fast, light read perfect for this time of year.

You can purchase ‘Twas the Night After Christmas on Amazon.com

Disclosure:  I was sent a copy of ‘Twas the Night After Christmas gratis from the Gallery Books a division of Simon and Schuster. Any opinions expressed are my honest opinions and were not impacted by my receipt of the free book. I received no monetary compensation for this post.