Touchstone Books sent me their new release, The Underground River by Martha Conway at no charge for review. Read on to see what I thought. 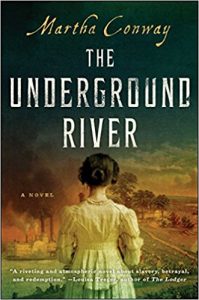 About the Underground River:

Set aboard a nineteenth century riverboat theater, this is the moving, page-turning story of a charmingly frank and naive seamstress who is blackmailed into saving runaways on the Underground Railroad, jeopardizing her freedom, her livelihood, and a new love.

It’s 1838, and May Bedloe works as a seamstress for her cousin, the famous actress Comfort Vertue—until their steamboat sinks on the Ohio River. Though they both survive, both must find new employment. Comfort is hired to give lectures by noted abolitionist, Flora Howard, and May finds work on a small flatboat, Hugo and Helena’s Floating Theatre, as it cruises the border between the northern states and the southern slave-holding states.

May becomes indispensable to Hugo and his troupe, and all goes well until she sees her cousin again. Comfort and Mrs. Howard are also traveling down the Ohio River, speaking out against slavery at the many riverside towns. May owes Mrs. Howard a debt she cannot repay, and Mrs. Howard uses the opportunity to enlist May in her network of shadowy characters who ferry babies given up by their slave mothers across the river to freedom. Lying has never come easy to May, but now she is compelled to break the law, deceive all her new-found friends, and deflect the rising suspicions of Dr. Early who captures runaways and sells them back to their southern masters.

As May’s secrets become more tangled and harder to keep, the Floating Theatre readies for its biggest performance yet. May’s predicament could mean doom for all her friends on board, including her beloved Hugo, unless she can figure out a way to trap those who know her best.

Martha Conway grew up in Cleveland, Ohio, the sixth of seven daughters. Her first novel was nominated for an Edgar Award, and she has won several awards for her historical fiction, including an Independent Book Publishers Award and the North American Book Award for Historical Fiction. Her short fiction has been published in the Iowa Review, Massachusetts Review, Carolina Quarterly, Folio, Epoch, The Quarterly, and other journals. She has received a California Arts Council Fellowship for Creative Writing, and has reviewed books for the Iowa Review and the San Francisco Chronicle. She now lives in San Francisco, and is an instructor of creative writing for Stanford University’s Online Writer’s Studio and UC Berkeley Extension. She is the author of The Underground River.

This is not going to be a book for everyone but I truly did enjoy it. It is the story of May, a young woman who ends up living with her cousin, Comfort Vertue – an actress of questionable talents. May is an excellent seamstress so she is brought along when Comfort needs to find a way to support herself upon the death of her husband. Life changes dramatically for both of them when the steamship they are taking explodes. Both survive but the trajectory of both of their lives changes as they are separated in the confusion.

They ultimately reunite but Comfort’s current benefactor does not want May around so pays her to go away. She does and finds work on a floating theatre as a seamstress. She finally comes into her own and feels as if she is among friends. Until she is forced into doing something she does not want to do – ferry the babies of runaway slaves across the river. May initially has no feelings about the issue other than how it will impact her life. Ultimately she realizes it’s a bigger issue than just herself.

I was engrossed in the story as I found the descriptions of life on the floating theatre fascinating. The author brought the period alive for me. Slavery was not the main issue in this story – May’s feelings and thoughts drove the tale. The focus was how things impacted her, not how vile slavery was. It’s definitely one woman’s story.

As I noted above, not everyone is going to like this book because it doesn’t take a firm stand one way or the other. May does not go into her “mission” full of righteous anger with thoughts of saving babies lives. This takes place pre-Civil War so the issues of slavery and the freedom of the slaves had not become so present in people’s minds. May is a young girl concerned only with her survival. It’s a bold way to tell a story about such a sensitive issue. It was a very different viewpoint to tell this type of tale.