Welcome to the third stop on the excerpt tour for Diana Palmer’s novel, Untamed. Be sure you check out the first two if you haven’t already and follow along to the end. 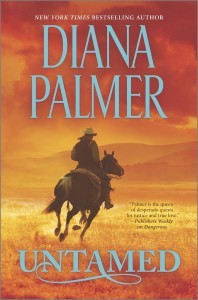 Stanton Rourke lives life on the edge. The steely mercenary is dangerous in every way…especially to Clarisse Carrington’s heart. She and Rourke were playmates as children, but she’s not the innocent girl he once knew. When tragedy robbed Clarisse of her entire family, her life was changed forever. Besides, she’s a grown woman now, and there are secrets that hold her back from succumbing to her pursuer. As she struggles to keep her distance, sparks as hot as a Texas summer fly between them. But danger is following Clarisse, leaving her no choice but to rely on Rourke, even as the old wounds lying dormant between them flare up again…

An icon in western romance, Diana Palmer has been writing with Harlequin since 1980 and has published over 180 titles, with over 61 million books sold! When not writing, Susan’s hobbies are gardening, knitting, crocheting, astronomy, archaeology and animals. She also has dogs, cats, birds and lizards.

He’d tried to phone her, but he couldn’t get her to answer her cell. She probably knew his number by heart. She wouldn’t even pick up when he called.

Now she was here, somewhere close, and he couldn’t even get information from his best sources about her condition. He remembered again the way she’d been in Barrera, bleeding, white in the face, worn to the bone, but still defiant.

The steward walked down the aisle and announced that the rebels who held the airfield were allowing the passengers to leave after a brief negotiation. He even smiled. Rourke leaned over and unobtrusively patted the hide gun in his boot. He could negotiate for himself, if he had to, he mused.

He called his contact, a man with a vehicle, to drive him to the refugee camp. This man was one of his few friends in the country. It was Bob Satele, sitting beside him, who had given him the only news of Tat he’d had in weeks.

“It is most terrible, to see what they do here,” the man remarked as he drove along the winding dirt road. “Miss Carrington has a colleague who gets her dispatches out. She has been most sympathetic to the plight of the people, especially the children.”

“Ya,” Rourke said absently. “She loves kids. I’m surprised that Mosane hasn’t had her killed.” He was referring to the leader of the rebel coalition, a man with a bloodthirsty reputation.

“He did try,” his contact replied, making Rourke clench his teeth. “But she has friends, even among the enemy troops. In fact, it was one of Mosane’s own officers who got her to safety. They were going to execute her…”

He paused at Rourke’s harsh gasp.

Rourke bit down hard on his feelings. “NATO is threatening to send in troops,” he said, trying to disguise the anguish he felt. At the same time he didn’t dare divulge what he knew; it was classified.

“The world should not permit such as this to happen, although like you, I dislike the idea of foreign nations interfering in local politics.”

“This is an exception to the rule,” Rourke said. “I’d hang Mosane with my own hands if I could get to him.”

The other man chuckled. “It is our Africa, yes?”

“Yes. Our Africa. And we should be the ones to straighten it out. Years of foreign imperialism have taken a toll here. We’re all twitchy about letting outsiders in.”

“Your family, like mine, has been here for generations,” the other man replied.

“Just down the road. You can see the tents from here.” They passed a truck with a red cross on the side, obviously the victim of a bomb. “And that is what happens to the medical supplies they send us,” he added grimly. “Nothing meant for the people reaches them, yet outsiders think they do so much good by sending commodities in.”

“Too true. If they’re not destroyed by the enemy, they’re confiscated and sold on the black market.” He drew in a breath. “Dear God, I am so sick of war.”

“You should find a wife and have children.” His friend chuckled. “It will change your view of the world.”

“No chance of that,” Rourke said pleasantly. “I like variety.”

He didn’t, actually. But he was denied the one woman he did want.