I received a free ecopy of The Valley for my honest review. 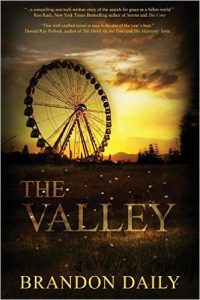 For the people of Corvin Valley, a small and secluded region within the Appalachian Mountains, life is slow and simple. Graham Stevens and Quinn Arnolds are teenagers falling in love for the first time, Father Wade Northrup and Sheriff Michael Leighton are both men trying to move on from sordid pasts and live righteous lives, and Adeline Lewis is a lonely woman in search of love and a place within her world. But when a tragic accident occurs in the valley, these five people are forever changed as their paths become inextricably linked and they are each confronted with their deepest secrets and fears while being forced to reconcile their actions.

The Valley explores the sometimes dark nature of love and family, and shows how hope can often be found in the unlikeliest of places.

Brandon Daily is the author of the novel A Murder Country, which was awarded the Silver Medal for the Georgia Author of the Year Award–First Novel in 2015. His short fiction has appeared in several online and print magazines, and his one act play South of Salvation was performed and won first prize in the CAST Players One Act Play Festival in 2012. Brandon currently lives in Southern California with his wife and son, where he is a teacher. He is currently working on another book and several more short stories.

This is a story, at it’s heart about secrets. It takes place in a small town in the Appalachian Mountains (I swear I do not do it on purpose but my books tend to mirror each other.) It focuses on five people, each one just trying to live life but each one hiding from something.

Not all is as it seems and as always when you have secrets there are bound to be people willing to go to great lengths to keep them. Is the past the past? Can someone truly move on? These are questions that that the characters in this engrossing novel try to answer as they come together when two kids go missing.

It’s a hard book to write about without spoiling things. Just know that it’s a book that is rich on plot and character development. It does rely on flashbacks – which can drive me a bit bonkers but it isn’t done to excess here. They are necessary since the book is built on past secrets. I will admit that I have just seen too many tales lately so I think that flashback books are becoming my WWII books – I’ve just read too many of them and I’ve grown weary. That is NO fault of Mr. Daily’s. I just seem to have been attracted to books in the last year that used the conceit.

Onwards! This is one of those books that was very worth reading but that I can’t say I enjoyed but that is solely due to the subject matter. It’s just not a “happy” book, but it’s a good book and a thought provoking book.

You can read my review of A Murder Country