I received a free copy of The Varangian from Historical Fiction Virtual Book Tours for my honest review. 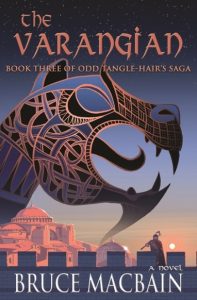 The third volume of Odd Tangle-Hair’s Saga finds our hero in Golden Miklagard (Constantinople), posing as an ambassador from the Grand Prince of Rus. But his real mission is to assassinate his former master, Harald the Ruthless, who has now risen high in the Emperor’s Varangian Guard. Odd is dazzled by the brilliance of the Byzantine capital and its beating heart–the Great Palace, with the astonishing Throne of Solomon that levitates above the heads of kneeling courtiers.

Here, Odd will meet Constantine Psellus, an ambitious young bureaucrat who mentors him in the ways of the court. He will be drawn into an intrigue that involves the Empress Zoe, who spends her days brewing vats of perfume, and John the Guardian of Orphans, the powerful and sinister eunuch who schemes to advance his family. And Odd will fall in love with Selene, an alchemist’s daughter, who supports herself by gambling in the waterfront taverns.

Finally, after a hard-fought campaign against the Saracens in Sicily and the overthrow of an Emperor, Odd reaches the pinnacle of power and believes he has vanquished his enemy Harald once and for all.

Then disaster overwhelms him.

Bruce Macbain holds degrees in Classics and Ancient History and was formerly an Assistant Professor of Classics at Boston University. He decided to stop writing scholarly articles (which almost no one read) and turn his expertise to fiction—a much more congenial medium. His previous novels include two mysteries set in ancient Rome (Roman Games, The Bull Slayer) and the first two novels in the Odd Tangle-Hair series (Odin’s Child, The Ice Queen).

This is the third and apparently final book in the Odd Tangle-Hair saga. I did not have the good fortune to read the first two books and as is usual with series I am sure it would have enhanced this book for me, I did not feel any loss for not having read them. Mr. MacBain does an excellent job of filling in backstory without making his readers feel like they are reading a dossier.

The book is essentially Odd’s telling of his story and this is his last chapter. He is on a mission to the Byzantine Empire but his true role is one he keeps close. He is going to kill his greatest enemy, Harald. Harald is one of the elite guards, the Varangians. What follows is a well researched and well written tale of a time not often presented in novels.

I must admit to a fascination with this period in history and this book is welcome addition to those I have read before. The combination of Constantinople and Vikings is so irresistible and I honestly had little knowledge of their coming together. Which is why I love reading historical fiction so very much. I read, I research and I learn. I pull what fiction there is and revel in a bit of history I didn’t know before.

Odd Tangle-Hair is a great character and the world Mr. MacBain builds for him is one grounded in what historical record is left. It is a world that comes alive for the reader so that you feel as if you are walking (fighting, living) right beside Odd as he makes his way through his mission. I’m almost sorry it had to come to an end and I would truly like to read the first two books in the series.