Vegan Cookbook: Eat For the Planet by Gene Stone and Nil Zacharias.

I was sent a copy of the vegan cookbook, Eat for the Planet as part of the Abrams Dinner Party. All Opinions are my own.

I have mentioned before that we are trying to eat less meat around these parts. I have found many a vegetarian recipe that is tasty and satisfying. Rice and pasta based meals are very popular. Vegan cooking has been explored but I have to admit I like my butter, eggs and cheese. I did make some awesome vegan cookies that will be a regular part of my cookie baking – they were that good. How about you? Have you explored vegan recipes? If you would like to, I have a cookbook to help you explore the possibilities. 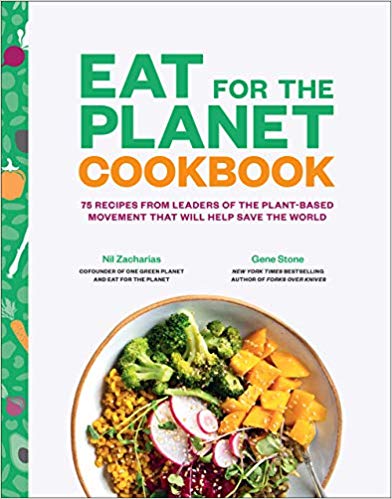 About Eat For the Planet:

The most delicious planet-friendly, vegan recipes from leading plant-based chefs and innovators

From Nil Zacharias, the cofounder of multiple online platforms focused on the plant-based food space, and Forks Over Knives author Gene Stone, Eat for the Planet Cookbook is a delicious, informative guide to eating vegan—featuring 75 recipes from some of the world’s greatest plant-based chefs, businesses, and influencers. These contributors range from vegan chefs and influencers such as Fran Costigan and Derek Sarno, brands like Beyond Meat and Ripple Foods, and innovative plant-based restaurants such as Veggie Grill, Next Level Burger, and The Stanford Inn. With this exceptional collection of go-to recipes and insight from some of the most influential voices in the vegan world, Eat for the Planet Cookbook is an essential guide to eating responsibly and eating well.

Gene Stone has written or cowritten 45 books on a wide variety of subjects, including the national bestsellers Forks Over Knives, How Not to Die, and The Engine 2 Diet. Stone lives in Hudson, NY.
Nil Zacharias is the cofounder and editor in chief of One Green Planet (onegreenplanet.org), which is one of the largest and fastest-growing independent digital media platforms in the food sustainability and green space. Zacharias lives in New York City.
Yum
Share
Email
The Runaway Heir by Janice Broyles – Book Review
The King’s Greatest Enemy Series by Anna Belfrage