The Vineyard by Maria Duenas – Book Spotlight with Giveaway

I am pleased to bring you a new book today, The Vineyard by Maria Duenas. I will be reviewing the book in December. For now, read about this new release and enter to win a copy for yourself. 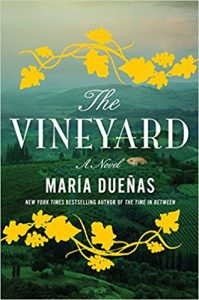 New York Times bestselling author Maria Dueñas returns with The Vineyard, a magnificent story of ambition, heartbreak, and desire set in the 1860s Mexico, Cuba, and Spain—perfect for fans of Kate Morton and Kristin Hannah.

Mauro Larrea’s fortune, the result of years of hardship and toil, comes crashing down on the heels of a calamitous event. Swamped by debt and uncertainty, he gambles the last of his money in a daring play that wins him an abandoned house and a vineyard an ocean away. Mauro travels to Andalusia de Jerez in Spain with every intention of selling the property and returning to Mexico. That is, until he meets the unsettling Soledad Montalvo, the wife of a London wine merchant, who bursts into his life unannounced, determined to protect her family’s legacy. Before long, Larrea finds himself immersed in the rich culture of the sherry trade. As his feelings for Soledad ripen into a consuming passion, he seeks to restore the vineyard to its former glory.

From the turbulent young Mexican republic to flourishing Havana, and onward to the fertile vineyards of Jerez in the second half of the nineteenth century, María Dueñas’s new novel takes place on both sides of the Atlantic, the New World and the Old. This story of family intrigue vividly conjures the noise and grit of silver mines, and the earthier lure of ancient vineyards and magnificent cities whose splendor has faded. Here is a story of courage in the face of adversity and of a destiny forever altered by the force of passion.

María Dueñas holds a PhD in English philology. After two decades in academia, she broke onto the literary scene in 2009 with the publication of the New York Times bestselling novel The Time in Between, followed by The Heart Has Its Reasons in 2012. Both novels became international bestsellers and have been translated into thirty-five languages. The television adaptation of The Time in Between earned critical and international acclaim. The Vineyard is her third novel.

One lucky US reader will win a copy of The Vineyard. Just enter as many ways as you would like on the Gleam widget below. Full rules are on the widget.  Good luck everyone.
Maria Duenas

Other Books by Maria Duenas:

The Time In Between