We by Michael Landweber – Blog Tour and Book Review

I received a free copy of We from TLC Book Tours for my honest review. 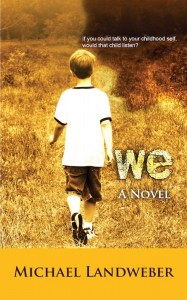 Paperback: 194 pages
Publisher: Coffeetown Press (September 1, 2013)
After an accident, forty-year-old Ben Arnold regains consciousness in the kitchen of the house he grew up in. Only he feels different, lighter somehow. Something is horribly wrong. Ben is swept into the arms of his mother, who he hasn’t seen in twenty years. She calls him by his childhood nickname, Binky. He sees a younger, unbroken version of his father. His estranged brother is there, reverted back to his awkward teenage self. Finally, adding horror to his confusion, he glimpses his older sister Sara as she runs out the door to meet her boyfriend.
Sara, whose absence he has felt every day since her death.
Ben is a mere hitchhiker, a parasite in the brain of seven-year-old Binky, and his younger self is not happy to have him there.
It is three days before his sister will be attacked. Ben knows he has to save Sara but first he must gain Binky’s trust. Even if he can get Binky to say the right words, to do the right thing, who will believe that a young boy can foretell the future?

Michael Landweber is the author of the novel, We, which won a ForeWord First award for best debut novel.  His short stories have appeared in a variety of places, including Gargoyle, Fourteen Hills, Fugue, American Literary Review, Barrelhouse and Ardor, and have been listed as Notable in The Best American Nonrequired Reading anthology.  He is an Associate Editor at the Potomac Review, and writes TV and movie reviews for Pop Matters.  Landweber has also worked at The Japan Times, the U.S. State Department and the Associated Press.  He lives in Washington, DC with his wife and two children.
Connect with Michael at his website, mikelandweber.com, Facebook, Twitter andGoodreads.

The last thing Ben Arnold remembers is falling….but when he wakes up he sees a drawing he made as a young child. A drawing on the refrigerator in his childhood home and then he hears his mother’s voice. A mother he hasn’t seen in more years than he can count. He comes to realize his older “self” has landed in the body (brain?) of his 7 year old self. As he is trying to assimilate this shocking fact he also realizes that it is three days before an event that shattered his family – the rape of his sister Sara.  Can he get his younger self to trust him and change history?

What an interesting concept! I must say I’ve never encountered a book like this before – the synopsis just intrigued me. I was drawn in from the first page and while I wish I had been able to just read it through – it was a busy few days – I read it whenever I could. I was so reluctant to put it down! Mr. Landweber was brilliant at keeping the two inhabitants of the one brain completely separate. The older Ben is not easy to like at first but you come to understand why he is like he is as you get to know the family in the three days you are with them. This is a family on the verge of implosion and Ben’s adult return to his 7 year old life let’s him realize so much that he didn’t the first time he lived through it.

It was an absolutely fascinating read but not a perfect read. It would get a little psychological at times with discussions of ids and egos that at least to me dragged down the story. I had to dig deep in my old brain to remember the definitions and relations so that is perhaps why. Nonetheless this is one of the more interesting books I’ve read in a long, long time.

You can see the We Tour Schedule

You can purchase We on Amazon.com

Yum
Share
Email
blog tour and book reviewMichael LanweberWe
Travelin’ Before the Farm: The US Virgin Islands – St. Thomas and St. John
Would You Like to Win a Stylish New Dress from Monroe and Main?