We Heard the Heavens Then by Aria Menu-Sepehr #Review 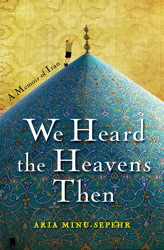 
ARIA MINU-SEPEHR was raised in a sheltered world of extraordinary privilege as the son of a major general in the Shah’s Imperial Iranian Air Force. It seemed his father could do anything—lead the Golden Crowns in death-defying aerobatic maneuvers; command an air force unit using top American technology; commission a lake to be built on a desert military base, for waterskiing. When Aria was eight, “Baba” built him a dune buggy so he could explore the desert; by ten, the boy handled the controls of a Beechcraft Bonanza while his father napped in the copilot’s seat. Aria moved easily between the two distinct worlds that existed under his family’s roof—a division that mirrored the nation’s own deep and brooding divide. He was as comfortable at the lavish cocktail parties his parents threw for Iran’s elite as he was running amok in the kitchen where his beloved nanny grumbled about the whiskey drinking, French ham, and miniskirts.

The 1970s were the end result of half a century of Westernization in Iran, and Aria’s father was the man of the hour. But when the Shah was overthrown and the Ayatollah rose to power in 1979, Aria’s idyllic life skidded to a halt. Days spent practicing calligraphy in his father’s embrace, lovingly torturing his nanny, and watching Sesame Street after school were suddenly infused with fears that the militia would invade his home, that he himself could be kidnapped, or that he would have to fire a gun to save Baba’s life. As the surreal began to invade the mundane, with family friends disappearing every day and resources growing scarce, Aria found himself torn between being the man of the house and being a much needed source of comic relief. His antics shone a bright light for his family, showing them how to escape, if only momentarily, the grief and horror that a vengeful revolution brought into their lives.

We Heard the Heavens Then is a deeply moving story told from two vantage points: a boy growing up faster than any child should, observing and recoiling in the moment, and the adult who is dedicated to a measured assessment of the events that shaped him. In this tightly focused memoir, Aria Minu- Sepehr takes us back through his explosive youth, into the heart of the revolution when a boy’s hero, held up as the nation’s pride, became a hunted man.


Aria Minu-Sepehr moved with his family to the United States following the fall of the shah of Iran in 1979. Aria’s memoir of his childhood experience in Revolutionary Iran is a personal narrative indebted to historical scholarship and powerful literature. The author draws from his experience as adjunct professor of English, as founder of Forum for Middle East Awareness, and as a public lecturer in fields related to Iran and the Middle East to fashion a universally human tale in one of the most pertinent and explosive settings of our age. He lives in Oregon with his wife and two daughters.


This memoir of a young boy living in Iran as revolution strikes was a compelling book. Young Aria lived a life of privilege as the son of one of the generals of the shah’s elite air force. His father, called Baba in the book was a mythic man to young Aria – capable of doing almost anything. Men snapped to his orders and he seemed almost god-like to a young boy. If he wanted a lake in the desert there would be a lake in the desert!


Aria was a very intelligent young man and soon realized that times were changing in his country without perhaps understanding why. His parents tried to keep him cushioned from the worst of what was going on around them but the fear that permeated the country’s elite class could not escape the household. As their house at the air force base on which they lived was surrounded by revolutionaries Aria’s mother stood firm until an escape could be made to Tehran. Soon another escape need be made – this time to London, then to the US.


The book reads almost like a novel. Mr. Menu-Sepehr’s writing carries you along with his young self. You are aware of the progression of events going on in the greater world but the story is really about a young boy growing up in a changing world and the love he has for his father. A father both myth and man.


You can purchase We Heard the Heavens Then at Amazon.com


Disclosure:  I received a copy of We Heard the Heavens Then from Free Press a division of Simon and Schuster. Any opinions expressed are my honest opinions and were not impacted by my receipt of the free book. I received no monetary compensation for this post.