I am very happy to welcome Susana Aikin, author of We Shall See the Sky Sparkling today as she tours with Historical Fiction Virtual Book Tours.  Read on to learn about the book. 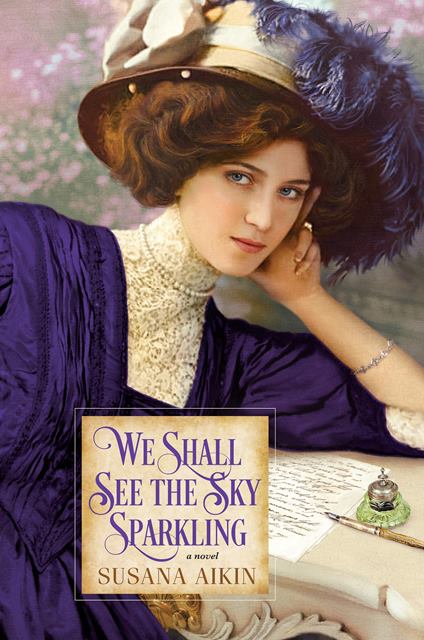 We Shall See the Sky Sparkling
by Susana Aikin

Set in London and Russia at the turn of the century, Susana Aikin’s debut introduces a vibrant young woman determined to defy convention and shape an extraordinary future.

Like other well-bred young women in Edwardian England, Lily Throop is expected to think of little beyond marriage and motherhood. Passionate about the stage, Lily has very different ambitions. To her father’s dismay, she secures an apprenticeship at London’s famous Imperial Theatre. Soon, her talent and beauty bring coveted roles and devoted admirers. Yet to most of society, the line between actress and harlot is whisper-thin. With her reputation threatened by her mentor’s vicious betrayal, Lily flees to St. Petersburg with an acting troupe–leaving her first love behind.

Life in Russia is as exhilarating as it is difficult. The streets rumble with talk of revolution, and Lily is drawn into an affair with Sergei, a Count with fervent revolutionary ideals. Following Sergei when he is banished to Vladivostok, Lily struggles to find her role in an increasingly dangerous world. And as Russian tensions with Japan erupt into war, only fortitude and single-mindedness can steer her to freedom and safety at last.

With its sweeping backdrop and evocative details, We Shall See the Sky Sparkling explores a fascinating period in history through the eyes of a strong-willed, singular heroine, in a moving story of love and resilience.

“Aikin’s novel is expertly plotted and rife with historical details in both its English and Russian settings, making for a rich story of the prejudices women faced at the turn of the 20th century and how the class disparity in Russia ignited the flame of revolution.” – Publishers Weekly

“Beginning and ending with letters written to her family, this novel has the feel of a serial drama. Readers of Pam Jenoff and Eva Stachniak will appreciate the strong-willed and artistically driven female character who finds her own way through difficult times.” – Library Journal

“. . . vivid and compelling – an exceptional woman on an extraordinary journey . . .” ~ Livi Michael, Author of War of the Roses Trilogy
​
“Against the dramatic backdrops of a Russia on the brink of revolution and the colorful lives backstage of the London theatre circuit, Susana Aikin has created a feisty Edwardian protagonist whose trajectory still resonates with the predicament of women working in the arts today.” ~ Sara Alexander, Under a Sardinian Sky and Four Hundred and Forty Steps to the Sea

“We Shall See the Sky Sparkling kept me up at night until blurry eyed, cheering Lily on through all her wild adventures, until she becomes one of those rare heroines, a mature independent woman to admire.” ~ Melissa Burch, Author of My Journey Through War and Peace
​
“Susana Aikin’s directorial eye is much in evidence in this sweeping saga. Her attention to period detail transports the reader on a filmic journey that is both astonishing and tragic. We Shall See the Sky Sparkling is a powerful meditation on the sacrifices women have made in pursuit of their dreams – sadly, as relevant in the early 21st century as a hundred years ago.” ~ Helen Steadman, Best-selling Author of Widdershins and Sunwise
​
“We Shall See the Sky Sparkling is a vivid, thoroughly absorbing account of one woman’s struggle to break from the rigid roles her social class and time period. Drawing from her family’s history and a series of fascinating letters, Aikin crafts a marvelous tale of adventure, rebellion, and romance, on a captivating journey from the theaters of Edwardian London to tumultuous St. Petersburg and beyond. Lily shines as a heroine of uncommon strength–her struggle to protect and foster her independence , even as she navigates through great loves and treacherous times, is to be relished and remembered.” ~ Suzanne Nelson, Author of Serendipity Footsteps

Born in Spain of an English father and a Spanish mother, Susana Aikin is a writer and a filmmaker who has lived and worked in New York City since 1982. She was educated in both England and Spain; studied law at the University of Madrid, and later Creative Writing at Manchester Metropolitan University, UK. In 1986 she started her own independent film production company, Starfish Productions, producing and directing documentary films that won her multiple awards, including an American Film Institute grant, a Rockefeller Fellowship, and an Emmy Award in 1997. She started writing fiction full time in 2010. She has two sons and now lives between Brooklyn and the mountains north of Madrid.

Wednesday, February 6
Review & Interview at Passages to the Past

Friday, February 8
Feature at What Is That Book About

Monday, February 11
Review at A Chick Who Reads

Tuesday, February 12
Review & Guest Post at Clarissa Reads it All

Thursday, February 21
Feature at The Lit Bitch
Feature at View from the Birdhouse

Friday, February 22
Feature at Maiden of the Pages

Thursday, February 28
Review at Oh, the Books She Will Read

During the Blog Tour we will be giving away a paperback copy of We Shall See the Sky Sparkling! To enter, please use the Gleam form below.

– Giveaway ends at 11:59pm EST on February 28th. You must be 18 or older to enter.
– Giveaway is open to US only.
– Only one entry per household.
– All giveaway entrants agree to be honest and not cheat the systems; any suspect of fraud is decided upon by blog/site owner and the sponsor, and entrants may be disqualified at our discretion.
– Winner has 48 hours to claim prize or new winner is chosen.

We Shall See the Sky Sparkling 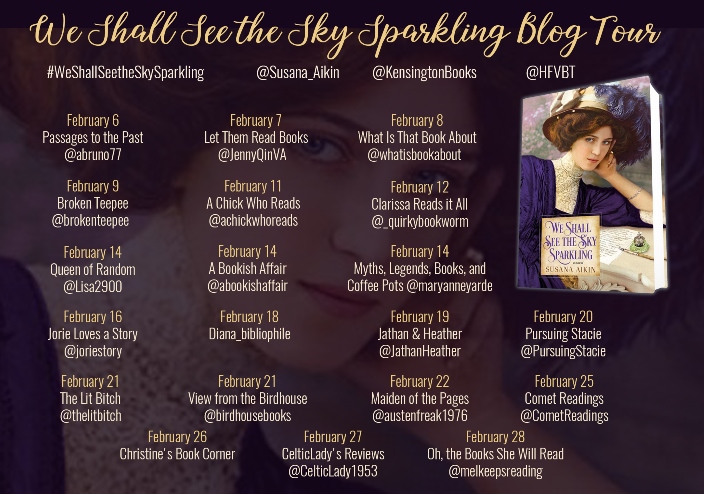