Another book looking at a period in American history for me. What Blooms From Dust by James Markert takes on the Dust Bowl period in Oklahoma mixing fact with a touch of magical realism. I thank TLC Book Tours for sending me a copy at no charge for my honest review. 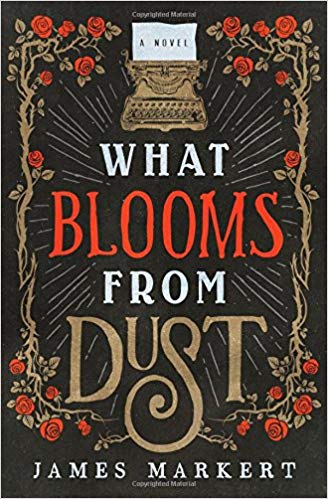 About What Blooms From Dust:

Just as Jeremiah Goodbye is set to meet his fate in the electric chair, a tornado tears down the prison walls, and he is given a second chance at life. With the flip of a coin, he decides to return to his home town of Nowhere, Oklahoma, to settle the score with his twin brother Josiah. But upon his escape, he enters a world he doesn’t recognize—one that has been overtaken by the Dust Bowl. And the gift he once relied on to guide him is as unrecognizable as the path back to Nowhere.

After one jolt in Old Sparky, Jeremiah sees things more clearly and begins to question the mysterious circumstances surrounding the murders he was accused of. On his journey home, he accidentally rescues a young boy who follows him the rest of the way, and the pair arrive at their destination where they are greeted by fearful townspeople. When the Black Sunday storm hits the very next day, the residents of Nowhere finally begin to let the past few years of hardship bury them under the weight of all that dust.

Unlikely heroes, Jeremiah and his new companion, Peter Cotton, try to protect the townspeople from themselves, but Jeremiah must face his nightmares and free himself from the guilt of flipping the coin on those men who died.

Filled with mystery and magic, What Blooms from Dust is the story of finding hope in the midst of darkness and discovering the beauty of unexpected kindness.

James Markert lives with his wife and two children in Louisville, Kentucky. He has a history degree from the University of Louisville and won an IPPY Award for The Requiem Rose, which was later published as A White Wind Blew, a story of redemption in a 1929 tuberculosis sanatorium, where a faith-tested doctor uses music therapy to heal the patients. The Angels’ Share is his second novel, and he is currently working on his next historical, All Things Bright and Strange. James is also a USPTA tennis pro, and has coached dozens of kids who’ve gone on to play college tennis in top conferences like the BIG 10, the Big East, and the ACC.

I have written before about books that are smarter than me. This is one of them. I just know that I missed things so I am definitely keeping this one to read again – it’s that kind of book. The kind of book that develops with each successive read. Your understanding of the characters and events will grow.

What Blooms From Dust is not your typical historical fiction novel. It does share the horror and despair of the Dust Bowl through the story of the people in Nowhere. Oklahoma. The founders of the town had moved there with promises of a majestic city already in place but found out that when they arrived there was … nothing. They decided to stick it out and the decisions they and others on the plains caused the ecological damage that when there was prolonged drought led to the Dust Bowl.

One family is the center of the tale, the Goodbyes. I am sure that name is purposeful and significant but I haven’t figured that out yet. Twin brothers Jeremiah and Josiah both love the same girl. Jeremiah has been in prison lately and had been set to be electrocuted but a tornado rolled through just as they pulled the switch and he was able to escape. He is heading back home to settle some scores.

Along the way he finds a woman selling one of her children as she claims she can’t afford to feed them. The boy is a little addled and repeats everything that is said to him. He also carries around a typewriter that he is constantly typing on.

There is so much to this tale that simply cannot be explained. I was hooked from the very first paragraph and I could not put it down. I seriously want to read it again but my reading schedule doesn’t allow the time for it right now. It is not a straightforward book as it does wander into the realm of magical realism and with books written like that you either go with the flow or you fight them the whole way. I am a very literal reader as I have mentioned before but there are authors that can break through that and Mr. Markert is one of them. I didn’t care that actions and events didn’t necessarily make sense in a real context. They made sense in this world. If you let them. And do, please do. This book was a magical exploration of love, redemption and perseverance.