Whatever You Love by Louise Doughty – Blog Tour and Book #Review 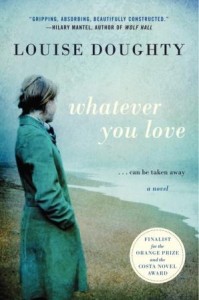 “I study the photo in the same way that a spy might study the face of a counterpart in a rival organization. I am calm as I make this promise: I am going to find out what you love, then whatever it is, I am going to track it down and I am going to take it away from you.”
After the death of Laura’s nine-year-old daughter, Betty, is ruled an accident in a hit-and-run, Laura decides to take revenge into her own hands, determined to track down the man responsible. All the while, her inner turmoil is reopening the old wounds of her passionate love affair with Betty’s father, David, and his abandonment of the family for another woman.
Haunted by her past and driven to a breaking point by her thirst for retribution, Laura discovers the unforeseen lengths she is willing to go to for love and vengeance.

Louise Doughty is the author of the novels Crazy Paving, Dance with Me, Honey-Dew, Fires in the Dark, and Stone Cradle, as well as the nonfiction book A Novel in a Year, based on her popular newspaper column. She has written plays for radio and has worked widely as a critic, broadcasting regularly for BBC Radio 4. She lives in London.
Visit Louise at her website.


This book purports to be about the revenge sought by a mother after the hit and run death of her 9 year old daughter Betty, but it read more like the memoir of the mother rather than a tale of retribution.


Laura goes back and forth in time telling of life pre and post accident; that being the defining moment in her life. She describes how she meets and falls in love with Betty’s father David, his subsequent defection for a younger woman Chloe and the moment in time that breaks both Laura and David – Betty’s death on a walk home from school  with her best friend Willow.


After the accident Laura tries to get on with her life but a revelation from the police leads her to try and track down the man who killed her daughter and meet him. Up until this point in the book I found myself caught up in the story. I was about wrung out from reading because Ms. Doughty has a way with words that draws you into the world of Laura and David and you truly feel their emotions.


I can certainly understand that the loss of a child can be a devastating event in a parent’s life but I find it hard to believe that a mother would react as Laura did. I mean, my stomach turned…
I can’t in all good conscious reveal such a major plot point but I won’t be reading any more books by Ms. Doughty which is a shame because until that scene I enjoyed her writing.


You can purchase Whatever You Love on Amazon.com


You can see the full Tour Schedule HERE

Disclosure:  I received a copy of Whatever You Love gratis from TLC Book Tours. Any opinions expressed are my honest opinions and were not impacted by my receipt of the free book. I received no monetary compensation for this post.