When We Believed in Mermaids by Barbara O’Neal – Blog Tour, Book Review and Giveaway

I think because I don’t have a sister I am often drawn to stories about them. I thank TLC Book Tours for sending me a copy of When We Believed in Mermaids by Barbara O’Neal at no charge for my honest review. 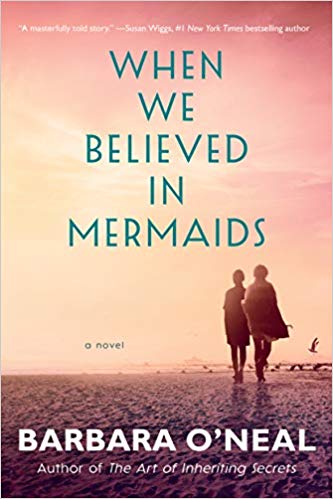 About When We Believed in Mermaids:

From the author of The Art of Inheriting Secrets comes an emotional new tale of two sisters, an ocean of lies, and a search for the truth.

Josie Bianci was killed years ago on a train during a terrorist attack. Gone forever. It’s what her sister, Kit, an ER doctor in Santa Cruz, has always believed. Yet all it takes is a few heart-wrenching seconds to upend Kit’s world. Live coverage of a club fire in Auckland has captured the image of a woman stumbling through the smoke and debris. Her resemblance to Josie is unbelievable. And unmistakable. With it comes a flood of emotions—grief, loss, and anger—that Kit finally has a chance to put to rest: by finding the sister who’s been living a lie.

After arriving in New Zealand, Kit begins her journey with the memories of the past: of days spent on the beach with Josie. Of a lost teenage boy who’d become part of their family. And of a trauma that has haunted Kit and Josie their entire lives.

Now, if two sisters are to reunite, it can only be by unearthing long-buried secrets and facing a devastating truth that has kept them apart far too long. To regain their relationship, they may have to lose everything.

Barbara O’Neal is the author of twelve novels of women’s fiction, including The Art of Inheriting Secrets, How to Bake a Perfect Life, and The All You Can Dream Buffet. Her award-winning books have been published in more than a dozen countries, including France, England, Poland, Australia, Turkey, Italy, Germany, and Brazil. She lives in the beautiful city of Colorado Springs with her beloved, a British endurance athlete who vows he’ll never lose his accent.

My Opinion of When We Believed in Mermaids:

Kit heads to New Zealand and as she contemplates the possibility that her sister might be alive she thinks back to their life as children and the reader starts to get a sense of the relationships involved; Kit and Josie, the girls’ parents, a young man that came into their life one night and was treated like a member of the family. Their parent’s relationship was very volatile and self involved. The girls pretty much reared themselves. They grew up in the family restaurant so there were always people around to keep an eye on them, but there was no real structure. As they grew up they had each other and their adopted brother but not much else. Then suddenly Josie went off the rails and Kit did not know why – she started doing drugs and sleeping around. Then real disaster strikes with an earthquake that destroys everything the girls hold dear. Josie takes off and dies in a terrorist attack in France. Or does she?

Kit heads to New Zealand to try and find the woman she saw on the news and it’s the first time she has taken any time off in years. She’s an ER doctor and lives pretty solitary life – but for her cat. While there she meets a man who could be the love of her life but after the example of her parents she is not willing to give in to love. And she is in New Zealand to find her sister.

This is a rich and complicated tale about very flawed people; parents who could only love themselves. Sisters who loved each other but parted over one’s drug addiction. Hidden lies, stories not told, very bad parenting and many adults acting badly. A lot of different issues are covered from sexual abuse to suicide so be aware.

It is a story that keeps the reader involved from the beginning and sad that the book ends because you want to keep following along in the lives of the characters. Ms. O’Neal brings her different worlds to life; from the busy emergency room in California to the mansion in New Zealand overlooking the ocean. Despite the sad overtones of the book and the sometimes disturbing topics it was a book that I found hard to put down and it stayed with me for a while after I finished reading it.

One lucky US reader will win a copy of When We Believed in Mermaids. Just enter as many ways as you would like on the Gleam widget below. Full rules are on the widget. Good luck everyone.