When We Found Home by Susan Mallery – Book Review

I have been straying from my historical fiction favorites lately and reading more current titles. Susan Mallery’s latest, When We Found Home was a perfect summer diversion. I thank TLC Book Tours for sending me a copy at no charge for my honest review. I had previously reviewed The Secrets of the Tulip Sisters by the author. 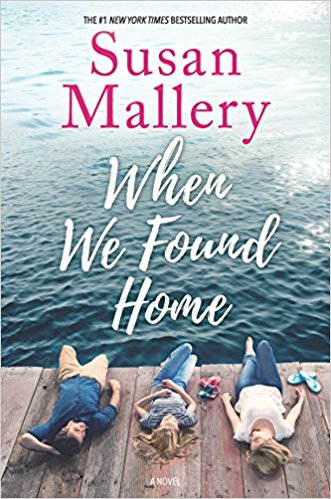 About When We Found Home:

Life is meant to be savored, but that’s not easy with no family, limited prospects and a past you’d rather not talk about.

Callie Smith doesn’t know how to feel when she discovers she has a brother and a sister—Malcolm, who grew up with affection, wealth and privilege, and Keira, a streetwise twelve-year-old. Despite her trepidation, she moves into the grand family home with her siblings and grandfather on the shores of Lake Washington, hoping just maybe this will be the start of a whole new life.

But starting over can be messy. Callie and Keira fit in with each other, but not with their posh new lifestyle, leaving Malcolm feeling like the odd man out in his own home. Becoming a family will take patience, humor, a little bit of wine and a whole lot of love. But love isn’t Malcolm’s strong suit…until he learns that an open heart, like the family table, can always make room for more.

#1 NYT bestselling author Susan Mallery writes heartwarming, humorous novels about the relationships that define our lives-family, friendship, romance. She’s known for putting nuanced characters in emotional situations that surprise readers to laughter. Beloved by millions, her books have been translated into 28 languages.Susan lives in Washington with her husband, two cats, and a small poodle with delusions of grandeur. Visit her at SusanMallery.com.

This book opens with a young woman named Delaney (which oddly is the same first name of the character in one of my most recent books. Is Delaney the new Mary?) flirting with a customer in the coffee shop where she works. For the life of me I couldn’t figure out what was going on as nowhere in the synopsis does that name appear. And it is odd as she is a very major character in the story. It’s almost as if her tale was shoehorned into the story of Malcolm and his two newly found sisters.

Malcolm is living with his grandfather as his father was a real, let’s just call him a pig since this is a family review and I can’t type what I want to. He really liked women but he didn’t care for the results of his relationships, IE his children. But Grandfather Alberto wants everyone to be together. Malcolm isn’t so sure about these two new younger sisters but the girls are very happy to have found each other.

The three of them – Malcolm, Keira and Callie have to learn to live together and then to become family. They might have the same father but they were brought up in very different ways and each in their own way is slow to trust.

This is a mash up of family drama and romance as Delaney – remember her – finds love with Malcolm and Callie also finds a relationship. Keira is child so her love is a little black ball of fur. I’m all for kittens so I liked that aspect. The storylines weave in and out of the girls adjusting to their new, posh life. Malcolm adjusting to sisters, Gradfather Alberto enjoying having his family together and two new loves burgeoning. Things go up, things come down. Nothing overly new or revelatory but a delightful summer read.