I received a free ecopy for my honest review. 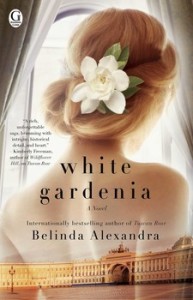 In a district of the city of Harbin, a haven for White Russian families since Russia’s Communist Revolution, Alina Kozlova must make a heartbreaking decision if her only child, Anya, is to survive the final days of World War II.

White Gardenia sweeps across cultures and continents, from the glamorous nightclubs of Shanghai to the austerity of Cold War Soviet Russia in the 1960s, from a desolate island in the Pacific Ocean to a new life in post-war Australia. Both mother and daughter must make sacrifices, but is the price too high? Most importantly of all, will they ever find each other again?

Belinda Alexandra has been published to wide acclaim in Australia, New Zealand, France, Germany, Holland, Poland, Norway, and Spain. She is the daughter of a Russian mother and Australian father and has been an intrepid traveller since her youth. Her love of other cultures and languages is matched by her passion for her home country, Australia, where she is a volunteer rescuer and caregiver for the NSW Wildlife Information and Rescue Service.

White Gardenia is one of those sweeping novels of family triumph and tragedy. It starts in China with a family of Russian ex patriots who experience the first of many disasters when the patriarch dies leaving the mother and daughter to the winds of war. World War II is causing all manner of problems for the Russians settled in China as the Japanese who have invaded China are losing ground and ultimately defeated so now the Russians are coming to let’s just say repatriate some of their errant nobility. This is problematic for young Anya and her mother Alina as a crazy Russian agent is determined to send them back to Russia, They are separated as Alina gets sent to a work camp but Anya escapes to Shanghai. From there her story begins.

I love these big, bold generational tales. They often have so much to offer a reader from history to romance to tragedy and more. This novel follows Anya as she grows from teenager to middle aged woman. She experiences so much in her life as she is taken in by friends of the family and thinks she finds love. She goes from Shanghai to exile in the South Pacific to Australia all the while wondering as to the fate of her mother.

The book is rich in historical detail but I found the plot at times just a little too convenient. I recognize that sometimes events are needed to move a story along but Anya had to be the luckiest refugee in the War. Everything turned her way. Even when something bad was happening I never really felt the pull of that negative emotion because I knew from past reading experience that it would all be all right in short order.

The characters were adequately developed and the plot as I mentioned was a little facile. The ending was the biggest disappointment. There was a big buildup to the big event and then….poof. The book was over. I was actually rather shocked. I almost wondered if my ebook was missing a chapter or two. Very frustrating after all that led before, I’ll tell you that.

It was an interesting if sometimes bothersome read. I learned about a part of history of which I had been previously ignorant. I  always enjoy reading about parts of the world that I just don’t know that much about so that helped raise the rating. But I have to say the plot was a bit of a disappointment.