Whither Thou Goest by Anna Belfrage – Book Review

I am always happy to read another book by Anna Belfrage so when Historical Fiction Virtual Book Tours offered me her latest book at no charge for my honest opinion I said yes! immediately to Wither Thou Goest. 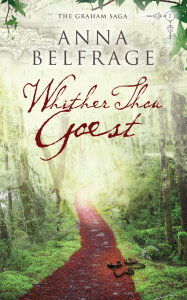 About Whither Thou Goest:

Whither Thou Goest is the seventh book in Anna Belfrage’s series featuring time traveller Alexandra Lind and her seventeenth century husband, Matthew Graham.

In their rural home in the Colony of Maryland, Matthew and Alex Graham are still recovering from the awful events of the previous years when Luke Graham, Matthew’s estranged brother, asks them for a favour.

Alex has no problems whatsoever ignoring Luke’s sad plea for help. In her opinion Matthew’s brother is an evil excuse of a man who deserves whatever nasty stuff fate throws at him. Except, as Matthew points out, Luke is begging them to save his son – his misled Charlie, one of the Monmouth rebels – and can Charlie Graham be held responsible for his father’s ill deeds?

So off they go on yet another adventure, this time to the West Indies to find a young man neither of them knows but who faces imminent death on a sugar plantation, condemned to slavery for treason. The journey is hazardous and along the way Alex comes face to face with a most disturbing ghost from her previous life, a man she would much have preferred never to have met.

Time is running out for Charlie Graham, Matthew is haunted by reawakened memories of his days as an indentured servant, and then there’s the eerie Mr Brown, Charlie’s new owner, who will do anything to keep his secrets safe, anything at all.

Will Matthew deliver his nephew from imminent death? And will they ever make it back home?

I was raised abroad, on a pungent mix of Latin American culture, English history and Swedish traditions. As a result I’m multilingual and most of my reading is historical – both non-fiction and fiction.

For more information, please visit Anna Belfrage’s website and blog. You can also find her on Facebook,Twitter, and Goodreads.

The Graham Saga continues with this seventh installment and I fell right back into the lives of Alex and Matthew as if I had never left. Whither Thou Goest begins with young Sarah at the end of her pregnancy; and she does not want anything to do with the baby as it was conceived in rape. Things seem calm around the farm but word soon filters in that one of those accursed Burley Brothers is still alive and heading their way. They know that he will gather some men and come back again to try and kill Matthew.

But this tale is about much more than the threat of the Burleys. (You know by now I have issues with these ever present villains.) Another dark character from the Graham’s past comes to the fore in this book – Matthew’s brother Luke. It was due to Luke’s misdeeds that Matthew was sold into what basically constituted slavery. But now Luke needs Matthew’s help – will it be given?

Luke’s son Charlie finds himself in a world of trouble in the West Indies and Luke is begging Matthew to rescue him. Alex knows you can’t put the sins of the father onto a child so off they go on yet another dangerous adventure. This being the main plot in this installment of the series but there are enough subplots to keep things very interesting as the various Graham children set out on their own. Alex does not like to let her little birds out into the world.

As usual I enjoyed following this couple along on their adventures both local and abroad. These characters are very well developed at this point and I feel like I know them. That doesn’t mean that someone could not pick up this book and appreciate the story for itself. Enough of the backstory is given to keep a reader on an even keel so that it can stand alone. It is though, much enriched by having read the volumes that come before. It ends on a wonderful note (maybe?) setting up the final volume for a very special finale to a memorable series of books.