I am always intrigued by books that tell two stories in different times. The Wicked City by Beatriz Williams does just that with a tale that centers around an apartment in New York. I was sent a copy at no charge by TLC Book Tours for my honest review. 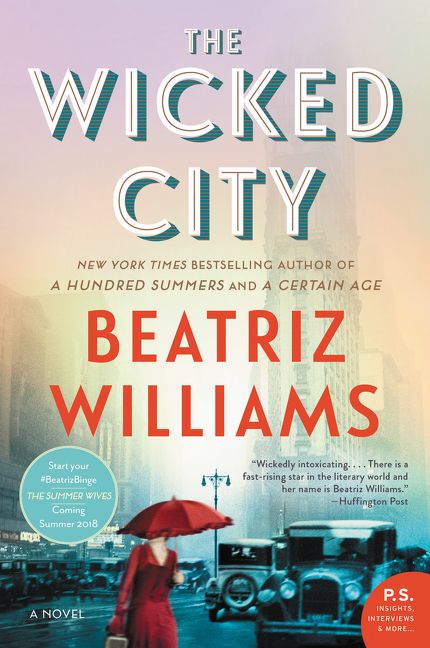 About The Wicked City:

In the first book of a breathtaking new trilogy by bestselling author Beatriz Williams, two generations of women are brought together inside a Greenwich Village apartment —a flapper hiding an extraordinary past, and a modern-day Manattanite forced to start her life anew.

When she discovers her banker husband has been harboring a secret life, Ella Gilbert escapes her SoHo loft for a studio in Greenwich Village. Her charismatic musician neighbor, Hector, warns her to stay out of the basement after midnight, when a symphony of mysterious noise strikes up—laughter, clinking glasses, jazz piano, the occasional bloodcurdling scream—even though the space has been empty for decades. Back in the Roaring Twenties, the basement was home to one of the city’s most notorious speakeasies.

In 1924, Geneva “Gin” Kelly, a quick-witted flapper from the hills of western Maryland, is a regular at this Village hideaway. Caught up in a raid, Gin lands in the office of Prohibition enforcement agent Oliver Anson, who persuades her to help him catch her stepfather, Duke Kelly, one of the biggest bootleggers in Appalachia.

But Gin is nobody’s fool. She strikes a risky bargain with the taciturn, straight-arrow Revenue agent, and their alliance rattles Manhattan society to its foundations, exposing secrets that shock even this free-spirited redhead.

As Ella unravels the strange history of her new building—and the family thread that connects her to Geneva Kelly—she senses the Jazz Age spirit of her exuberant predecessor invading her own shy nature, in ways that will transform her existence in the wicked city.

The Wicked City is available at Harper Collins

Read my reviews of A Certain Age and Cocoa Beach

This is a story of two women who share an apartment in New York,  but they do it in two different times; Ella moves into the space in the modern age after leaving her husband. Geneva lived there during Prohibition. At that time the building also housed a speakeasy and Ella sometimes hears the strains of jazz coming from a room in the basement.

Other than apartment the two women really have nothing to do with one another and their stories are completely different. As per usual with me I much preferred Geneva’s story and most of the book does tell her tale. Ella’s is constructed to bring Geneva’s forward I believe. It’s a little less developed and several plot points are left hanging. It’s far less compelling as well.

As to Geneva – her story is a page turner. I got happy every time I turned a page and found myself in her world. Not that she lived in an easy world. Her back story is parceled out bit by bit as she works towards separating herself from her roots.

Overall I really enjoyed the book. I was very disappointed when I turned the last page and I do hope that Geneva’s story continues somewhere down the line. I feel she has so much more to say. But I don’t know if that is going to happen. There are also several questions on Ella’s side that were left unanswered so I don’t know if that was intentional or what. But since I was more invested in Geneva perhaps I’m not as bothered.