I received a free copy of The Women in the Castle from TLC Book Tours for my honest review. 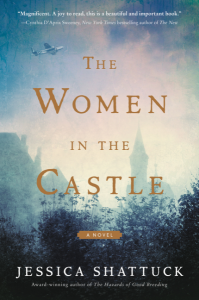 Three women, haunted by the past and the secrets they hold

Set at the end of World War II, in a crumbling Bavarian castle that once played host to all of German high society, a powerful and propulsive story of three widows whose lives and fates become intertwined—an affecting, shocking, and ultimately redemptive novel from the author of the New York Times Notable Book The Hazards of Good Breeding.

Amid the ashes of Nazi Germany’s defeat, Marianne von Lingenfels returns to the once-grand castle of her husband’s ancestors, an imposing stone fortress now fallen into ruin following years of war. The widow of a resister murdered in the failed July 20, 1944, plot to assassinate Adolf Hitler, Marianne plans to uphold the promise she made to her husband’s brave conspirators: to find and protect their wives, her fellow resistance widows.

First Marianne rescues six-year-old Martin, the son of her dearest childhood friend, from a Nazi reeducation home. Together, they make their way across the smoldering wreckage of their homeland to Berlin, where Martin’s mother, the beautiful and naive Benita, has fallen into the hands of occupying Red Army soldiers. Then she locates Ania, another resister’s wife, and her two boys, now refugees languishing in one of the many camps that house the millions displaced by the war.

As Marianne assembles this makeshift family from the ruins of her husband’s resistance movement, she is certain their shared pain and circumstances will hold them together. But she quickly discovers that the black-and-white, highly principled world of her privileged past has become infinitely more complicated, filled with secrets and dark passions that threaten to tear them apart. Eventually, all three women must come to terms with the choices that have defined their lives before, during, and after the war—each with their own unique share of challenges.

Written with the devastating emotional power of The Nightingale, Sarah’s Key, and The Light Between Oceans, Jessica Shattuck’s evocative and utterly enthralling novel offers a fresh perspective on one of the most tumultuous periods in history. Combining piercing social insight and vivid historical atmosphere, The Women in the Castle is a dramatic yet nuanced portrait of war and its repercussions that explores what it means to survive, love, and, ultimately, to forgive in the wake of unimaginable hardship.

Jessica Shattuck is the award-winning author of The Hazards of Good Breeding, which was a New York Times Notable Book and finalist for the PEN/Winship Award, and Perfect Life. Her writing has appeared in the New York Times, New Yorker, Glamour, Mother Jones, Wired, and The Believer, amtong other publications. A graduate of Harvard University, she received her MFA from Columbia University. She lives with her husband and three children in Brookline, Massachusetts.

This is a very powerful book. It covers a difficult time in history even though it doesn’t delve too deeply into WWII the impacts of Hitler and his policies are felt throughout. The book opens in the time just as Hitler is coming to power and some people see his danger and others don’t. A group of friends come together for what will be one of the last parties together before their worlds implode. As the men fight to defeat Hitler the women do what needs doing to survive.

After the war Marianne comes back to the castle that had been in her husband’s family for generations to regroup and to try and find some of the other widows of the men who tried to kill Hitler. She finds her best friend’s widow Benita and their young son Martin. They join Marianne and her sons in creating the best life they can although Benita is not as introspective as Marianne and she just wants to move forward and forget. Marianne never wants to forget so it doesn’t happen again. She keeps searching and searching and soon a third woman joins the family. They don’t all agree or even get along but they do survive – sometimes through the shear force of Marianne’s will.

The characters in this book are all very well defined and very well drawn. When your story depends so much on personalities and how they interact it’s important for the fictional characters to come across as real to the reader and they all do in this book – from the most significant to the face in the crowd. There are a number of different subplots that help to define each character and a couple of them truly surprised me. The only story that disappointed was that of Benita but I always do have problems with people who live a clueless life. I found myself thinking about this book for days after I finished it.

Share1
Tweet
Pin
Share
Email
Jessica ShattuckThe Women in the Castle
High Noon: The Hollywood Blacklist and the Making of an American Classic by Glenn Frankel – Book Review
To The Stars Through Difficulties by Romalyn Tilghman – Book Review