Written in Their Stars by Elizabeth St. John – Book Review

I do enjoy my English history although I do tend to either find myself in ancient times or Tudor times. It was nice to stray into the Cromwellian Era by virtue of the third book in the Lydiard Chronicles – Written in Their Stars by Elizabeth St. John. I thank Historical Fiction Virtual Book Tours for sending me a copy at no charge for my honest review. 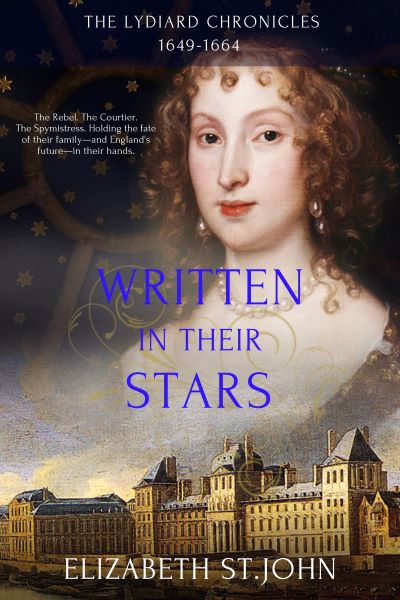 About Written in Their Stars:

London, 1649. Horrified eyewitnesses to King Charles’s bloody execution, Royalists Nan Wilmot and Frances Apsley plot to return the king’s exiled son to England’s throne, while their radical cousin Luce, the wife of king-killer John Hutchinson, rejoices in the new republic’s triumph. Nan exploits her high-ranking position as Countess of Rochester to manipulate England’s great divide, flouting Cromwell and establishing a Royalist spy network; while Frances and her husband Allen join the destitute prince in Paris’s Louvre Palace to support his restoration. As the women work from the shadows to topple Cromwell’s regime, their husbands fight openly for the throne on England’s bloody battlefields.But will the return of the king be a victory, or destroy them all? Separated by loyalty and bound by love, Luce, Nan and Frances hold the fate of England—and their family—in their hands.A true story based on surviving memoirs of Elizabeth St.John’s family, Written in their Stars is the third novel in the Lydiard Chronicles series.

Elizabeth St.John spends her time between California, England, and the past. An award-winning author, historian and genealogist, she has tracked down family papers and residences from Nottingham Castle, Lydiard Park, to the Tower of London. Although the family sold a few castles and country homes along the way (it’s hard to keep a good castle going these days), Elizabeth’s family still occupy them – in the form of portraits, memoirs, and gardens that carry their imprint. And the occasional ghost. But that’s a different story…

I found it particulary interesting that the story told in Written in Their Stars was based on the author’s family history. Just imagine writing a book to begin with and here you are putting words in your ancestor’s mouths. Can you imagine? Ms. St. John does a very compelling job of doing just that. She did have an exciting story to tell as her relatives were knee deep in the regicide of Charles I and the Restoration of Charles II.

The reader jumps into this third volume of the Lydiard Chronicles as the leaders of Parliament are voting whether to kill Charles I. You are introduced to the first members of the extended family whose exploits will keep you turning the pages until the monarchy is restored to England. But for now Luce and John Hutchinson are celebrating the King’s death warrant and the rise of the Republic. On the other side, Luce’s brother Allan and his wife Frances along with a cousin Nan, the Countess of Wilmot mourn all that is lost while trying to save their lands for when the King is returned.

What follows is a rich retelling of a very devisive time in British history. Oliver Cromwell’s ideals might have been laudable but his methods and means were far from humane or effective. Not to mention the fact that Mr. Cromwell soon effected the trappings of the very same monarchy he so detested. When he passed his son did not have the same strength of will as his father and when the factions started fighting it cleared the way for Charles II. Ms. St. John’s characters were very involved in the efforts to get the young King back to England and her descriptions of his life in exile were such that I could smell the stink of the streets and feel the cold as everyone suffered with too little to eat and no wood for the fires.

My only complaint about the book is that coming in to the third volume of a trilogy it was at times a little confusing understanding who was who and who was who to whom. References were made here and there to past happenings from the previous novels but not enough information was given to fully satisfy my need for knowledge. I think a brief biography at the start of the book would have helped me tremendously. But this was minor all things considered and the book as a whole was an intelligent, thought provoking read about the ties that bind even when faced with the worst a person can do. Family is family.