I’m very pleased to offer an excerpt from Wyoming Brave by Diana Palmer – you will note that this #6 so be sure to check the Tour Schedule go back and read the other exciting pieces of the story! Before I give you the snippet let me tell you all about the book. After all of that please be sure to enter the giveaway! 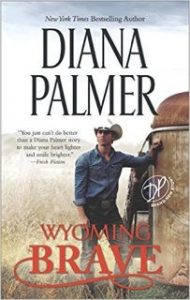 THE WYOMING MEN ARE BACK! IN THEIR QUEST FOR TRUE LOVE ON THE RANGE, ARE THESE RANCHERS BOLD ENOUGH TO OPEN THEIR HEARTS TO THE WOMEN UNDER THEIR PROTECTION?

Ren Colter may own an enormous ranch in Wyoming, but he scorns his wealth. He’s closed himself off since his fiancée left him months ago, so he’s shocked when he allows Meredith Grayling to stay with him. He tells himself it’s only to protect the blonde beauty from a stalker, but Ren’s alpha instincts soon kick in.

The last thing Merrie wants is a devastatingly handsome man like Ren lurking around her. He’s too experienced, too appealing for her already shot nerves. What she needs is just to get away from it all: the man haunting her waking dreams and the one hunting her like an animal. But no woman escapes this Colter cowboy!

The prolific author of more than one hundred books, Diana Palmer got her start as a newspaper reporter. A New York Times bestselling author and voted one of the top ten romance writers in America, she has a gift for telling the most sensual tales with charm and humor. Diana lives with her family in Cornelia, Georgia.

“He scares me to death,” Merrie confessed.
“He won’t hurt you,” Delsey said quietly. “You have to stand up to him, honey. A man like that will walk all over you if you let him.”
“I’ve lived almost twenty-three years with a man like that,” Merrie told her. “He…” She swallowed and her arms folded over her chest. “He was brutal to us, especially after our mother died. He wanted sons. He got us. So he made us pay for it. We couldn’t even date. He wouldn’t let us have friends. We still can’t drive a car. I’ve never even been kissed. How’s that for a sti­fled environment?” she asked with a hollow laugh. “The only concession he made was that we were al­lowed to go to church. You have no idea how impor­tant faith was to us when we were growing up. It was all that kept us going.” She fingered the cross under her sweatshirt. “My mother gave me this cross. And I’m not taking it off.”
Delsey smiled. “That’s the spirit. You tell him.”
“Sorry. I’m not a lemming,” Merrie teased.
Delsey laughed. “You’re a tonic, you know.”
Merrie looked wistfully at biscuits and sausage and eggs. “I guess I’ll be on time at lunch,” she said.
“He’s gone. Sit down and eat.”
Merrie sat at the table, her eyes worriedly glanc­ing at the door.
“Stay there,” Delsey said. She went and looked out the front door. Ren was going down the hill toward the barn in his big red SUV. Snow had started to fall lightly.
She went back to the kitchen. “He’s gone to the barn. After that, he’ll ride out to the line cabins and check on the livestock. Snow’s starting to fall.”
“It is?” Merrie was excited.
“Eat first,” Delsey said with a laugh. “Then you can go play in the snow.”
She hesitated with her fork over the eggs. “Thanks, Delsey.”
“It’s no problem. Really.”
Merrie sighed with pleasure and dug into breakfast. Afterward, she slipped on a light jacket and her boots. She was sorry she hadn’t packed a coat. They never had snow in Comanche Wells in autumn. They rarely even had it in winter.
“Child, you need something heavier than that!” Delsey fussed.
“I’ll be fine. I don’t mind the cold so much if there’s snow.” She laughed. “If I get too cold, I’ll just come back inside.”
“All right, but be careful where you go, okay?”
“I will.”

All purchase links are affiliate links which means I receive a small commission if you make a purchase. This helps me to keep the Farm cats in treats.