I have written that I want to stretch myself reading and Yeled Tov by Daniel M. Jaffe ventures far from my usual reading and far from my comfort zone. I thank TLC Book Tours for sending me a copy at no charge for my honest review. 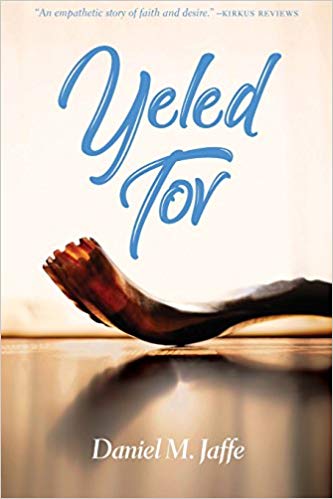 As he’s about to turn 16 in the mid-1970’s, Jake Stein notices a prohibition in Leviticus that never caught his eye before:  “Thou shalt not lie with mankind as with womankind; it is abomination.”  This discovery distresses Jake, an observant Jewish teen, because he’s recently been feeling increased attraction to other teen boys and men.  He’s even been engaging in sexual exploration with his best friend.  In an attempt to distract himself, Jake joins his high school’s production of The Diary of Anne Frank, but falls in love with the romantic male lead, obsessively fantasizing about him.  Jake feels lonelier than ever.

The next year, while a freshman at Princeton University, Jake falls for his handsome roommate, is beset by serious temptations, and engages in a traumatic sexual encounter with a stranger.  Seeking help from God, Jake tries to alter his desires, even dates a young Jewish woman in the hopes that she can change him, but to no avail.   Jake concludes that God could never love an abomination like him, so he attempts to prove his faith by ending his own life.

After he’s saved by his roommate, Jake receives unexpected support from doctors, family, and friends, some of whom have been suspecting his secret.  With their help, Jake explores a different way of thinking about the rules of Torah and himself, and begins to consider that he might actually be a yeled tov, a good Jewish boy, just the way he is.

Daniel M. Jaffe is an award-winning, internationally published fiction and essay writer.  His novel-in-stories, THE GENEALOGY OF UNDERSTANDING, was a finalist and honorable mention for the Rainbow Awards; and his novel, THE LIMITS OF PLEASURE, was a finalist for a ForeWord Magazine Book of the Year Award.  He is author of JEWISH GENTLE AND OTHER STORIES OF GAY JEWISH LIVING, and compiler/editor of WITH SIGNS AND WONDERS: AN INTERNATIONAL ANTHOLOGY OF JEWISH FABULIST FICTION.  Also, Daniel translated the Russian-Israeli novel, HERE COMES THE MESSIAH! by Dina Rubina.  Read more at www.danieljaffe.com.

This book is far out of my real world experience. I am not a Jewish boy nor am I gay. But I read to go into worlds about which I don’t know. Generally that is something like Elizabethan England but I’ve been trying to stretch my reading experiences. This book most certainly did that.

Jake is a young man who just wants to be a yeled tov – a good boy. He has been brought up in a religious house and he wants very much to please his parents, in particular his father. As he heads into his senior year of high school his hormones start to kick in but he finds himself not attracted to girls but to boys. This conflicts with everything that he has been raised to believe and since it’s the ’70s it’s not exactly a time of love and acceptance for people in the LGBTQ community.

The story follows Jake’s struggles with his identity through his final year of high school through acceptance to his chosen college to a fateful decision. A lot of Jake’s story is written through his fantasies as he attempts to deal with his feelings while having no one to whom he can turn to talk to about what he considers his unnatural desires. He feels if anyone knows about him they will turn away in disgust – what he doesn’t understand is that the friends that care for him the most already suspect and don’t care. His self hate is his biggest obstacle to happiness.

Despite this being a very alien world to me I found this to be a compelling book. The pain and struggles of Jake are really the same struggles for anyone who cannot accept themselves as they are….. Much of the story is told through fantasies in Jake’s head – and there are sex scenes as he stumbles his way through the life he has been born into. He also has conversations with his God in head as he struggles to reconcile his religion with what he feels.

Mr. Hall really brought the world of the 70s to life and the characters are all memorable, Jake most of all. The book is semi autobiographical.