I received a free copy of Yesternight from TLC Book Tours for my honest review. 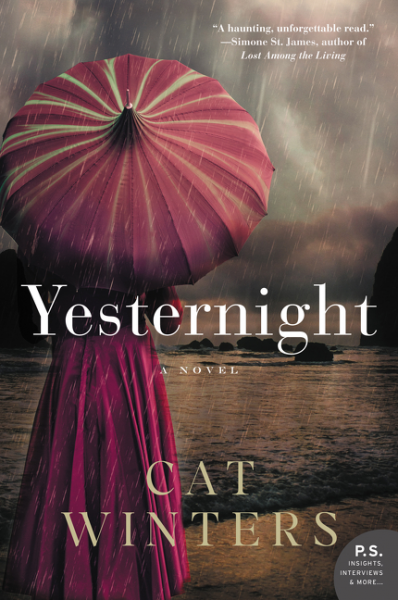 From the author of The Uninvited comes a haunting historical novel with a compelling mystery at its core.  A young child psychologist steps off a train, her destination a foggy seaside town. There, she begins a journey causing her to question everything she believes about life, death, memories, and reincarnation.

In 1925, Alice Lind steps off a train in the rain-soaked coastal hamlet of Gordon Bay, Oregon. There, she expects to do nothing more difficult than administer IQ tests to a group of rural schoolchildren. A trained psychologist, Alice believes mysteries of the mind can be unlocked scientifically, but now her views are about to be challenged by one curious child.

Seven-year-old Janie O’Daire is a mathematical genius, which is surprising. But what is disturbing are the stories she tells: that her name was once Violet, she grew up in Kansas decades earlier, and she drowned at age nineteen. Alice delves into these stories, at first believing they’re no more than the product of the girl’s vast imagination.  But, slowly, Alice comes to the realization that Janie might indeed be telling a strange truth.

Alice knows the investigation may endanger her already shaky professional reputation, and as a woman in a field dominated by men she has no room for mistakes. But she is unprepared for the ways it will illuminate terrifying mysteries within her own past, and in the process, irrevocably change her life.

Cat Winters’s debut novel, In the Shadow of Blackbirds, was released to widespread critical acclaim. The novel has been named a finalist for the 2014 Morris Award, a School Library Journal Best Book of 2013, and a Booklist 2013 Top 10 Horror Fiction for Youth. Winters lives in Portland, Oregon, with her husband and two children.

First – isn’t that cover just gorgeous? It’s one of those covers that would stop your forward progress in a book store and make you pick up the book to read the synopsis. I will note it has absolutely nothing to do with the book other than it rains a lot in the locale but there is no particular mention of an umbrella. Or a beautiful burgundy dress.  But who cares when it’s so pretty?

Alice Lind is a psychologist who specializes in children with difficulties so she travels from school to school in the Pacific Northwest. As the book opens it’s 1925 and she has been sent to a very small town on the coast of Oregon. There she is to ostensibly test the children to see if their needs are being met but in reality she is there to meet one girl named Janie who has been telling stories of about someone named Violet since she was 2 years old. She also happens to be a math prodigy. There are no plausible explanations for Janie’s behaviours so her father is anxious for answers. Her mother is less inclined to want help.

Janie’s parents are divorced and differ widely on how Janie should be handled. Her mother just wants to ignore the problem and her father, Michael wants to pursue whatever clues they have to a conclusion. Miss Lind does not believe in the reincarnation theory being put forward but when everything she has been taught fails to bring an answer she starts an investigation that leads her to the possibility of proving its existence.

Miss Lind has her own reasons for questioning reincarnation as she gets deeper into Janie’s life for she has some unexplained events from her own childhood. She wonders if she and Janie are somehow connected. As she finds the answers that Janie’s family seeks will it lead to her own?

This book was so much more than I was expecting. It was a page turner that I really didn’t want to put down and in fact, I really didn’t. I read it on one rainy afternoon. The mood set by Ms. Winters was pretty much mirrored in my real world as the rain and wind battered the windows of the yurt. I suspect it helped make the reading experience all the more real as I heard the rain as I read about the weather.  The author really knows how to set a gothic mood – that mildly creepy undertone bubbling through in unexpected places. I was disappointed in that with all of the focus on Janie and her tale that when the denouement finally came and most of the questions were answered Janie pretty much gave way to Alice and her search. But there were still things I wanted to know about Janie!

The section on Alice – and I can’t say much without giving things away – was the weakest part of the book. Fortunately it was not a large part of the tale. I understand the need for part of it as it set up the totally “what the heck” ending that made me go back and read the last couple of pages again. Alice Lind is truly a complex character – a woman in a man’s world with a woman’s needs yet not seeking a husband. This was not accepted at this time in history. I found her fascinating, yet challenging. This is certainly a book you don’t want to read before going to bed.

You can purchase Yesternight at Harper Collins/Amazon