A Murder by Any Name by Suzanne M. Wolfe – Blog Tour and Book Review with a Giveaway

I do love reading books that take place during Tudor Times. I thank Historical Fiction Virtual Book Tours for sending me a copy of A Murder by Any Name at no charge for my honest review. 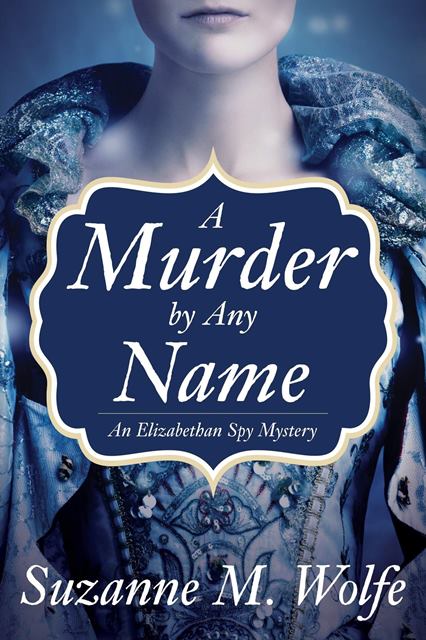 About A Murder by Any Name:

When a brutal murder threatens the sanctity of the Elizabethan court, it’s up to a hot-tempered spy to save the day.

The court of Elizabeth I is no stranger to plotting and intrigue, but the royal retinue is thrown into chaos when the Queen’s youngest and sweetest lady-in-waiting is murdered, her body left on the high altar of the Chapel Royal in Whitehall Palace. Solving the murder will require the cunning and savvy possessed by only one man. Enter Nicholas Holt, younger brother of the Earl of Blackwell—spy, rake, and owner of the infamous Black Sheep tavern in the seedy district of Bankside. Nick quickly learns that working for the Queen is a mixed blessing. Elizabeth—salty-tongued, vain, and fiercely intelligent—can, with a glance, either reward Nick with a purse of gold or have his head forcibly removed.

When a second lady-in-waiting is slain at Whitehall, the court once again reels with shock and dismay. On the trail of a diabolical killer, Nick and his faithful sidekick—an enormous Irish Wolfhound named Hector—are treading on treacherous ground, and only the killer’s head on a platter can keep them in the Queen’s good graces.

Suzanne M. Wolfe grew up in Manchester, England and read English Literature at Oxford University, where she co-founded the Oxford C.S. Lewis Society. She served as Writer in Residence at Seattle Pacific University and taught literature and creative writing there for nearly two decades. Wolfe is the author of three novels: A Murder by Any Name, The Confessions of X, and Unveiling.

Thirty years ago, she and her husband, Gregory Wolfe, co-founded Image, a journal of the arts and faith. They have also co-authored many books on literature and prayer including Books That Build Character: How to Teach Your Child Moral Values Through Stories, and Bless This House: Prayers For Children and Families. Her essays and blog posts have appeared in Image and other publications. She and her husband are the parents of four grown children. They live in Richmond Beach, Washington.

I must admit that I enjoy books that take place in Elizabethan times. I haven’t read one in a bit so I was quite happy to find myself again walking the halls with this great queen. In A Murder by Any Name we find Elizabeth sitting comfortably on her throne but as she always did, dealing with threats to her rule from various factions. The plot that drives the story is all fiction as are most of the main players so anyone reading the tale can just read the book for the story. This is not a tale that involves historical events but rather a story that has a couple of historical personages within.

The newest of Elizabeth’s ladies in waiting is found murdered and the Queen calls in one her favorites to solve the crime. Nicholas Holt is one of her spies but he also has skills she respects.  She instructs him to find out who has committed the murder before riots start blaming the wrong people for it.

As Nicholas starts digging another one of Elizabeth’s ladies is murdered and things get even more tense in London as people blame either the Jews or or the Catholics for the murders. Elizabeth tells him he’d better figure out whodunit or there will be hell to pay. Will he and his trusty hound be able to find the killer?

I don’t know if writing that I enjoyed this book is the correct thing to say for it is a murder mystery. It’s kind of rude to enjoy murder. But I did find the book to be a good read. The plot was intriguing, the characters quirky and engaging and the story moved right along. Elizabeth was more of an ancillary player to the fictional characters and that was actually a good thing in a way. She is such a known quantity that it was nice to be in her world but not have her be the center of it.

The book also delved into some of the social issues of the time which mirror some of the social issues of today. Interesting that – as they say, the more things change, the more they stay the same. I found Ms. Wolfe’s writing style to be easy to read and one that brought Elizabeth’s court alive. From life in the castle to the denizens of the seedier parts of town, all were brought vividly alive as I read. I will look forward to further adventures from Nicholas and his large, furry sidekick. 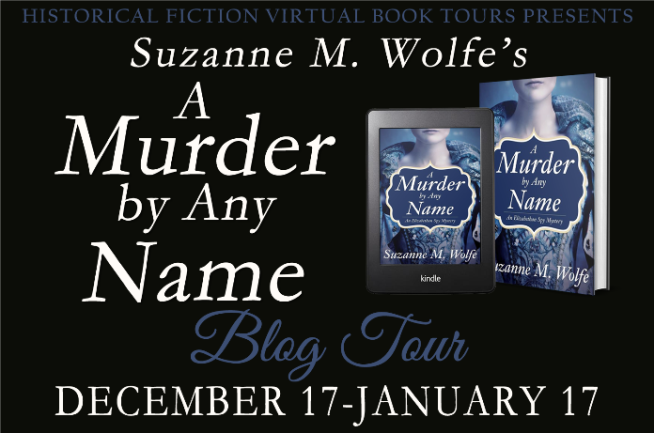 During the Blog Tour we will be giving away 3 hardcover copies of A Murder By Any Name! To enter, please use the Gleam form below.

– Giveaway ends at 11:59pm EST on January 17th. You must be 18 or older to enter.
– Giveaway is open to US residents only.
– Only one entry per household.
– All giveaway entrants agree to be honest and not cheat the systems; any suspect of fraud is decided upon by blog/site owner and the sponsor, and entrants may be disqualified at our discretion.
– Winner has 48 hours to claim prize or new winner is chosen.

A Murder By Any Name