A Vacation in Rome

One of my most memorable birthday gifts was a surprise. It often happens that way, doesn’t it? The hubby conspired with my girlfriend and put together a two week holiday to Italy. It was somewhere I always wanted to go and I would now have the weekend breaks to the Rome of my dreams.  The beginnings of this ancient, yet modern city can be traced back to the 8th century BC and that was one of the things that fascinated me the most about walking around – you could feel the history.

Everyone knows the most famous feature of Rome, the Coliseum. That magnificent structure was completed in 8 years (72AD – 80AD.) Can you imagine? Of course the labor situation was not ideal for those building it! It could hold up to 80,000 people for those gladiator battles that have led to so many movies. I do know that when I stood in front of it I felt very small and I knew the power of the Roman Empire. 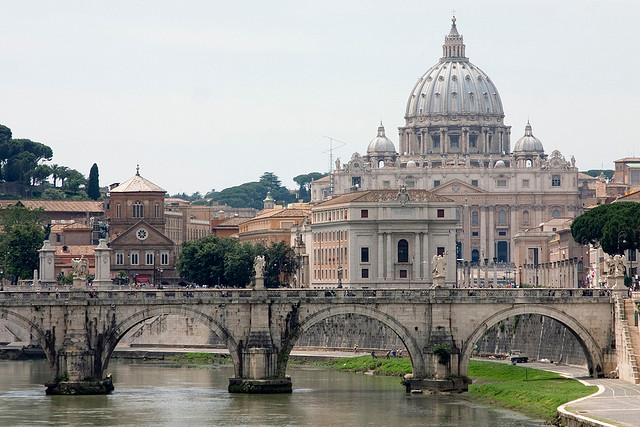 Rome is more than power, it is also about beauty. Vatican City is encircled by Rome. It came into formal existence in 1929 but for me it was all about St. Peter’s basilica, the Sistine Chapel and Michelangelo’s Pieta. My course of study in college had been art history and my passion was Michelangelo so being where he worked and walked was a little bit of heaven for me. I think a person could spend a week of their Rome vacation in the Vatican and not be bored.

How can one look upon the Pieta and not be moved? Can you believe that this is marble? Michelangelo saw a block of stone and bit by bit he chipped away at it until this piece of magnificence appeared. It is even more stunning in person – it is something that I think everyone should see. The man’s genius was not only in sculpture.

Even though he claimed throughout his career that he was not a painter he created one of the most revered chapel ceilings in the world – that of the Sistine Chapel. The Final Judgement on the back wall is even more powerful a work if less well known. I can tell you that when I walked into the room I literally stopped dead in my tracks. I was awestruck. A guard had to tap me on the shoulder to ask me to keep moving. My husband and I went back to see the chapel 5 times during our vacation in Rome.

In addition to the art and culture you will find some of the best food in the world in Rome. I still remember some of the meals we had on our trip. I had the best chicken I have ever eaten in a small restaurant not far from the Vatican. One night we both had a carpaccio dish that was heaven on a plate. Thinly sliced beef, spicy arugula, salty Parmesan cheese and olive oil like you can only get in Italy. Then there was the risotto, the gnocchi, the pizza. I could go on and on and on. And I haven’t even started on the gelato – on my ice cream, the gelato! I came home so inspired and I still use that inspiration today.

I’ve saved the fun for last – the shopping! Rome is, of course an international mecca for fashion. I sadly didn’t have a huge budget when I was on my trip but I will tell you about a coat that still haunts my dreams. It was leather. Italian leather – you know the kind I’m writing about. Leather so soft it doesn’t feel like leather any more. Silky smooth and oh, so pliable. It was a full length, rich brown leather coat, lined with sable. I know – not very politically correct but oh, what a coat! I wanted it. I tried it on – I did. It was glorious. But it did not come home with me. I settled for a pair of cashmere lined leather gloves. I still have them. The leather they are made from is gorgeous and has only gotten softer with time.

So, have I convinced you? Are you ready to book a flight for Rome?

Thanks to Expedia for bringing back my happy memories of my trip to Rome.