I received a free copy of A Year of Ravens for my honest review. 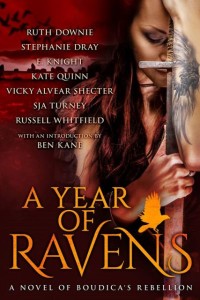 Britannia: land of mist and magic clinging to the western edge of the Roman Empire. A red-haired queen named Boudica led her people in a desperate rebellion against the might of Rome, an epic struggle destined to consume heroes and cowards, young and old, Roman and Celt . . . and these are their stories.

A calculating queen sees the sparks of revolt in a king’s death.

A neglected slave girl seizes her own courage as Boudica calls for war.

An idealistic tribune finds manhood in a brutal baptism of blood and slaughter.

A conflicted warrior hovers between loyalty to tribe and loyalty to Rome.

A death-haunted Druid challenges the gods themselves to ensure victory for his people.

An old champion struggles for everlasting glory in the final battle against the legions.

A fiery princess fights to salvage the pieces of her mother’s dream as the ravens circle.

A novel in seven parts, overlapping stories of warriors and peacemakers, queens and slaves, Romans and Celts who cross paths during Boudica’s epic rebellion. But who will survive to see the dawn of a new Britannia, and who will fall to feed the ravens?

When asked to review a book about this utterly fascinating woman I couldn’t say yes fast enough. To be honest I didn’t even notice the fact that the book was written by seven different people until it arrived. I just find Boudica so intriguing. So little is really known about her yet she exerts her pull on history with her remarkable story.

If you don’t know anything about the Queen of the Iceni at the time of the Roman occupation of what we now call Great Britain. The Romans wanted and wanted and wanted and finally they didn’t get what they wanted and there was a rebellion. The beauty of this book is the telling through the imaginations of seven very different, very talented writers each writing a different story. Each story advances the overall tale in time and while there is really no continuity in style there is one fantastic overall book.

This is not a romance novel. It is not a simple retelling of historical events. It is a down and dirty exploration of a war between the might of Rome and peoples determined to regain their land and way of life. Horrible, despicable things happen – on both sides – and they are not glossed over. It was a violent time and yet, despite that the book was nigh on impossible to put down.

Not much of this amazing woman was left to history – the events take place in 60 AD. And most of the written record on Boudica is what the Romans have left. We all know that history is written by the victors so we can only imagine the truth of her exploits. She really must have been one hell of a woman! The seven authors of  A Year of Ravens bring her and the rest of the players to vivid life in a format that allows for reading one chapter at a time if you so desire. I found that I just wanted to read and read and read. And when it was all over I wanted to start again. All hail Boudica.

You can read my review of A Song of War: A Novel of Troy

You can purchase A Song of War: A Novel of Troy on Amazon.com