A new year of reading begins with this first book. It is, of course historical fiction. What else would I start out with? I thank the publisher for sending me a copy of An Improbable Pairing by Gary Dickson at no charge for my honest review. 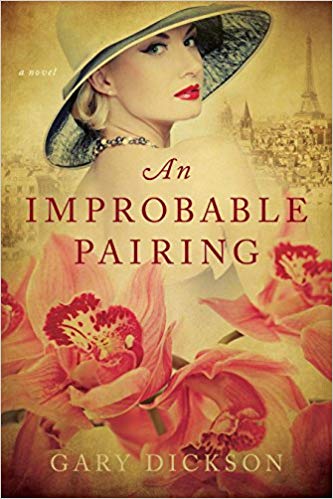 About An Improbable Pairing:

It began as a simple flirtation . . .
In September of 1963, Scott Stoddard, an American graduate student, is traveling to Switzerland, when he meets the Countess de Rovere, a French divorcee; he is smitten, and she is intrigued. What begins as a little coquetry soon becomes a serious love affair, much to the consternation of the Countess’s ex-husband and mother, not to mention the Countess’s friends of European high society. A meeting of equals poses problems enough, but what about one between two people who seem to have so many differences? And when a man of traditional attitudes couples with an independent and self-confident woman, something’s got to give. It won’t be the countess. As their liaison transcends an affair that cannot be dismissed, they all agree that something must be done.

An Improbable Pairing is a historical romance that chronicles the enduring themes of a young man’s coming of age and the rebellious love of the mismatched. This pas de deux, set in the golden years of 1960s Paris, Geneva, Gstaad, and Cannes, provides an insider’s peek into the worlds of haute couture, three-star gourmet restaurants, and lavish hotel suites—the domains of rank and privilege. But society’s privileged resist when an interloper threatens to upset their cozy structure.

Gary Dickson is an inveterate traveler and a Francophile sans merci. Educated in Switzerland in history, literature, and the classics, Gary lives in Los Angeles with his wife, Susie.

A young American man, Scott Stoddard, is heading to study in Switzerland. His life has been one of an upper middle class wealth in the South. One of privilege and comfortable living but it is nothing compared to the old wealth he will encounter when he starts meeting not only his fellow students but the upper echelons of European society. It starts when he meets one young woman on the ship on the way over and she is his entree into a world he could only imagine. And to a woman he falls in love with at first sight. A woman every man wants.

Scott gets off the ship and works his way to the school in Geneva by way of a stop in Paris where he makes some friends. He is introduced to people come from families that go far back in time with more money than he could even conceive. He has a very generous allowance from his parents but his head still swims. His attention is still drawn to the woman of his dreams, the Countess de Rovere. And she is also looking his way.

They eventually meet but there is as much drawing them together as pulling them apart. She is older, has more life experience, has been married before and has a lot more money than he has. He is of a different class, inexperienced, younger and not quite accepted by the old guard in which she moves. And yet still they fall in love. But will it work out?

This book is about love, class, and family. I enjoyed the parts of the story that were about the young man out of his element. Scott’s adventures with his friends. The beginnings of the romance between Scott and the Countess were well written and a very good tale but as the story went on it did start to get a touch repetitive. Not so much in action as they traveled hither and yon in Europe but rather in detailing Scott’s feelings about loving the Countess.

I felt in reading that I was less a participant in the story as happens with most books I read but rather that the action occurred at a remove. I felt like I was reading as opposed to just being. I don’t know if this makes sense but usually when I read a book I become immersed in the story and stop feeling like I am reading and more feel like I am living within the story. That just didn’t happen with this book and it lessened my enjoyment of the story.