The hubby surprised me with a little getaway last week. Every year I read about the opening of the Beartooth Highway (All American Road) and how stunning the scenery is as you climb to the pass at 10,947 feet(3,337m) Not to mention the climb down into Wyoming and ultimately into the Lamar Valley of Yellowstone – at least the way we did the drive. There is nothing that says you can’t do it the other way. Conventional wisdom tells you not to drive into the sun, so this is the best route if you want to avoid staring at a bright orb while you try to focus on the road.

The Highway is a section of Route 212 between Red Lodge, Montana and Cooke City, Montana, with a traipse through a bit of Wyoming in between. The Beartooth Pass is in Wyoming; it’s the fourth highest pass in the continental US. The three that are higher are in Colorado. The Rocky Mountains got some height, eh? 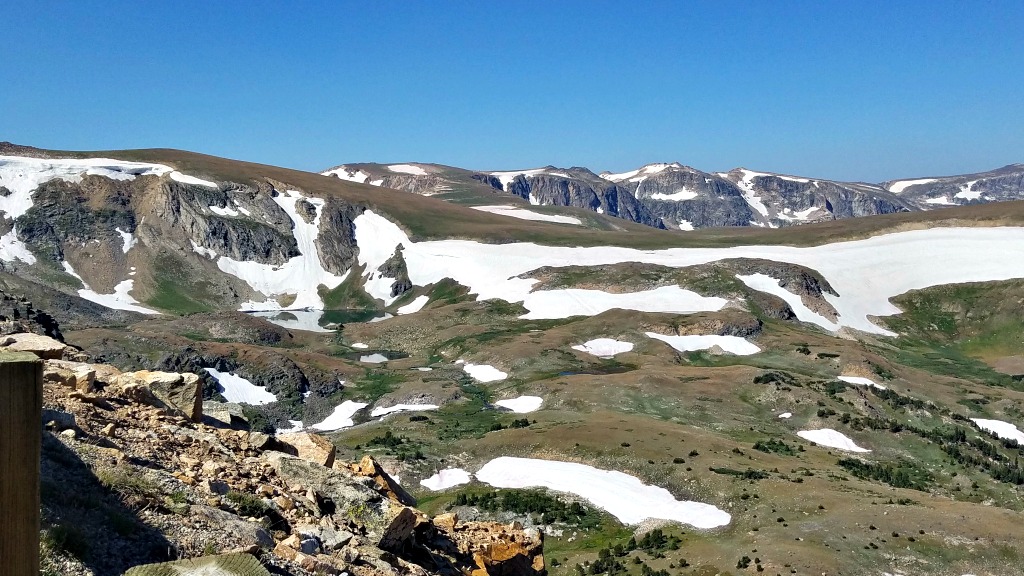 The road is only open from June to perhaps October – it all depends on the weather. They get a LOT of snow up there. In fact, there was still a remarkable amount still to be seen despite it being August. As a matter of fact it snowed on the Highway on August 5th!

That is why if you intend to drive this road it is wise to check the weather before you start.

We left Superior and drove to Red Lodge, Montana on our first day. Tomorrow I will share a little more about the towns and hotels where we stayed or this post would be far too long. I’ve said more than once that there are very few places I’ve been in Montana that aren’t scenic. 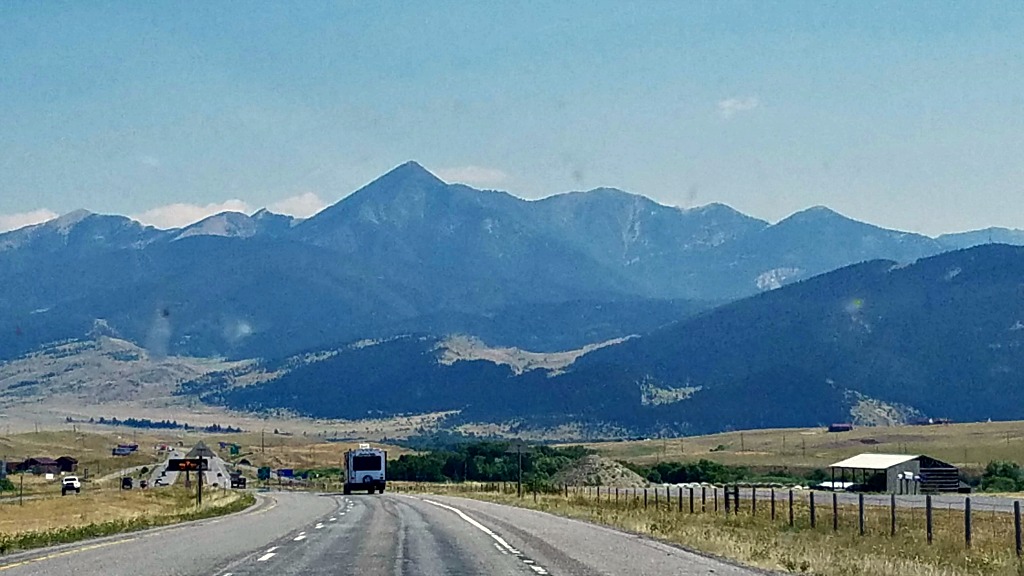 As we got close to our destination for the night the Beartooth Mountains were in front of us. The only thing that marred the view at all was the fire haze in the air. It wasn’t that thick, all things considered – it was far worse up in Missoula so we counted our blessings. We pulled into Red Lodge in the late afternoon so we were able to get settled in, have a nice dinner and get to bed early. We just hoped the next day would be bright and clear.

Heading for the Beartooth Pass

We got on our way in the morning and headed into the Gallatin National Forest and started going up, up, up. The Beartooth Highway is a National Scenic Byway, an All American Road and is considered one of the most scenic drives in the USA. I now know why. 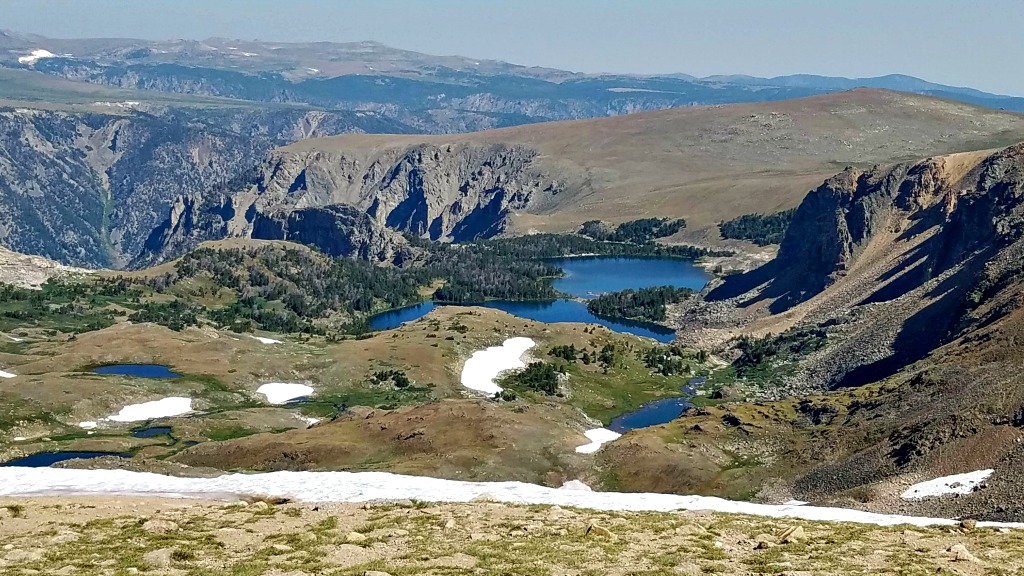 The vistas on the way up were astounding; alternating between scenes of alpine lakes strung along like a necklace. 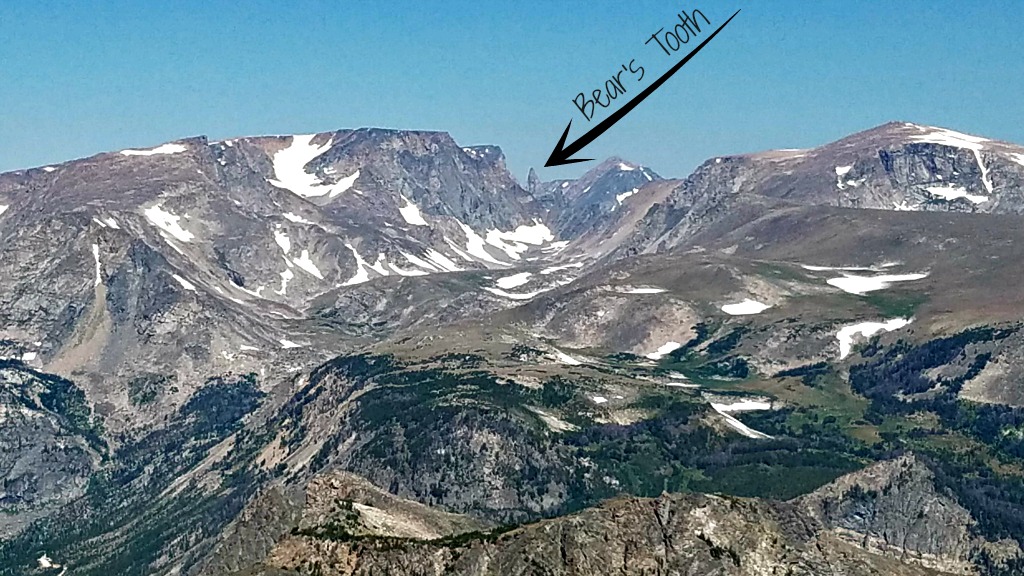 To otherwordly mountainsides that defy description. And yes, there is a feature called The Bear’s Tooth that gave the mountain range it’s name. It’s a spire that juts up from the range. It may look insignificant in my photo but don’t let it fool you; it has an elevation of 11,920 ft (3,630m).

Almost to the Pass

There is a rest stop as you hit about 9,100 feet (2,774m) where you can stop to enjoy the view, use the rest rooms and stretch your legs. It’s home to a number of somewhat friendly golden mantle ground squirrels. 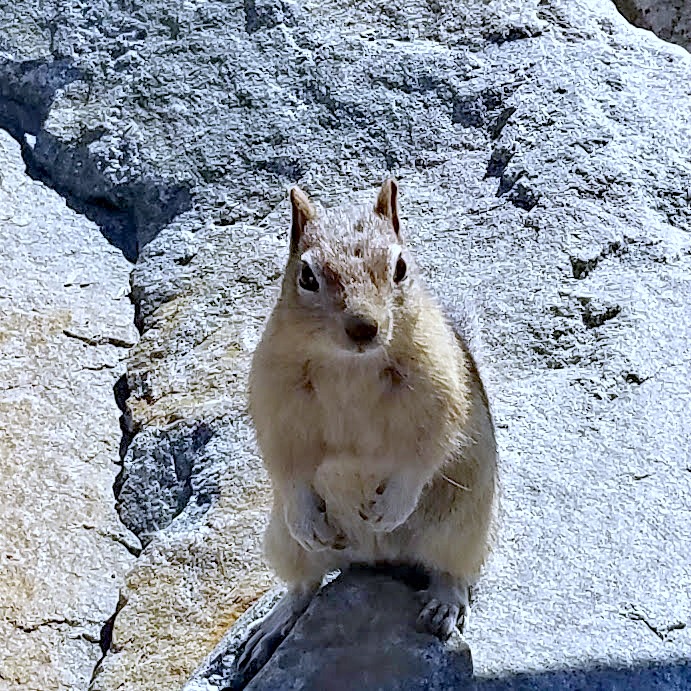 If you’ve never seen one they are a rather curious mix of squirrel and chipmunk. The ones here have obviously figured out that cute works and if they beg they will be fed. I was good – I did not contribute to the delinquency of the rodents. 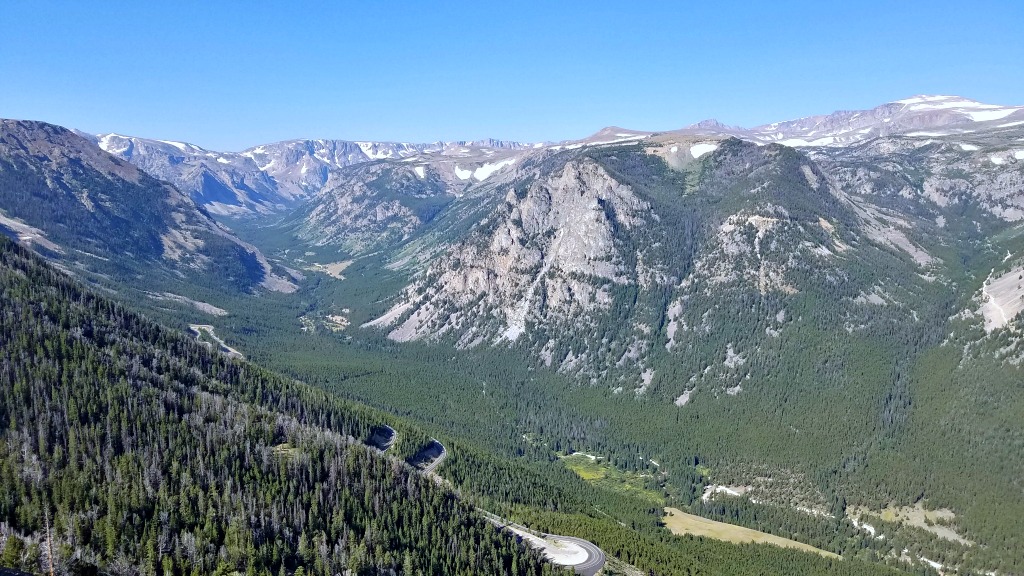 You do start to get a real feel for just how high you are. At this point we were just about above the tree line.

The View from the Top 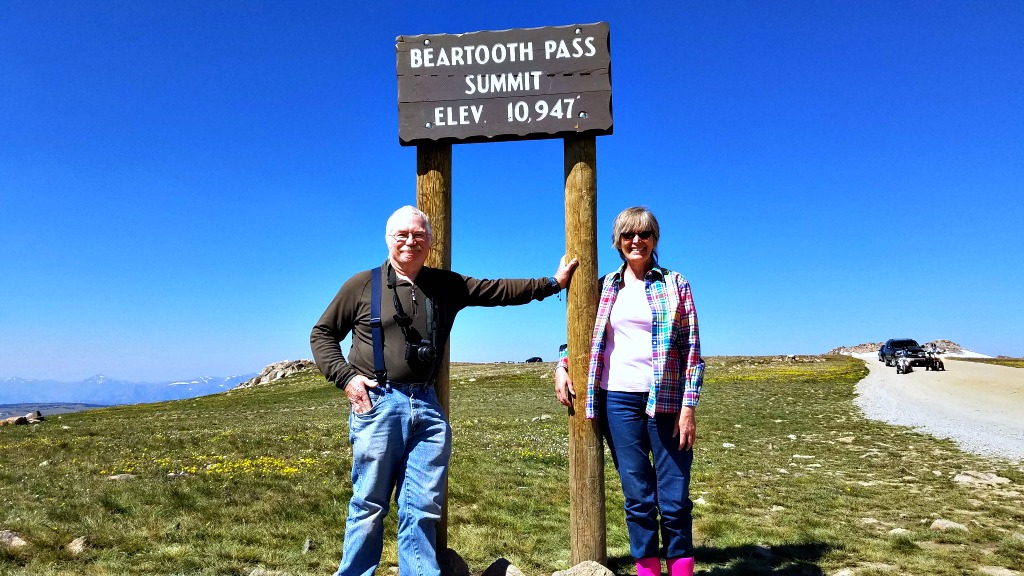 I was pleasantly surprised that I didn’t have any issues with breathing given the altitude. We did a fair amount of walking around to explore and I wasn’t bothered at all which was nice. The top of the mountain was nice and flat and offered spectacular views to the valley below. 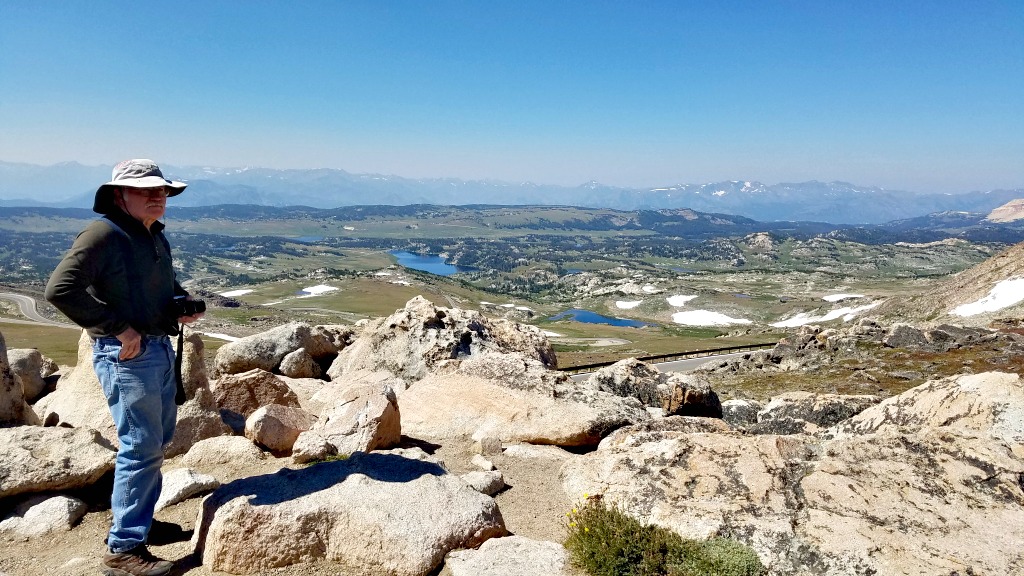 Many people chose this area to sit and enjoy their lunch. Or to just marvel at what nature had on display. There is a special feeling when you are at the top of the world.

All good things as they say….

Soon we had to get ourselves back in the car and start the drive down the mountain. We would be spending the night in Livingston, Montana, and had a bit of drive ahead of us yet but there still was much to see. The trip down was just as beautiful, but so very different. The vistas were not as wild, but were no less beautiful. 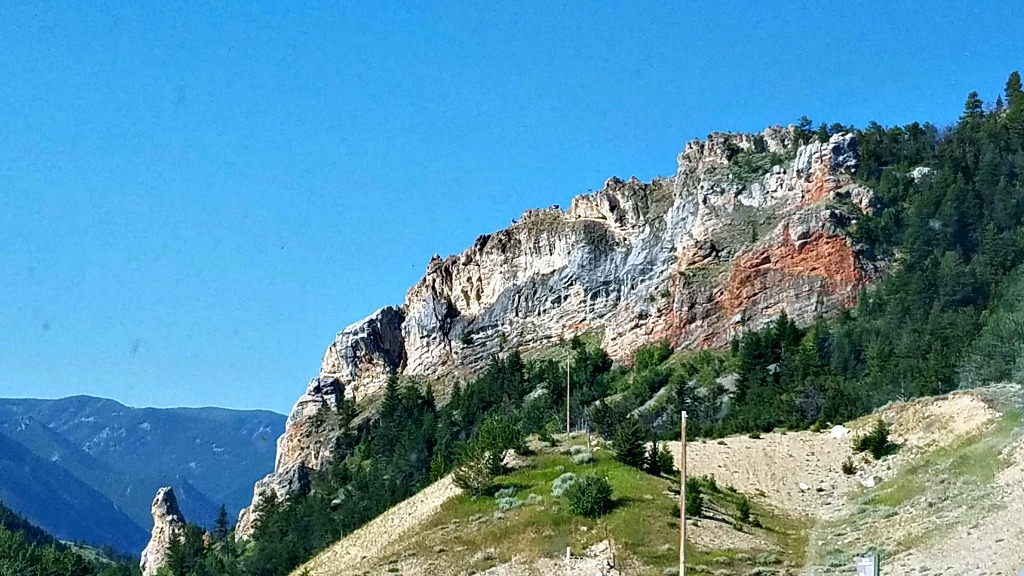 The rock formations and buttes made for an ever changing landscape as the sun moved through the sky. 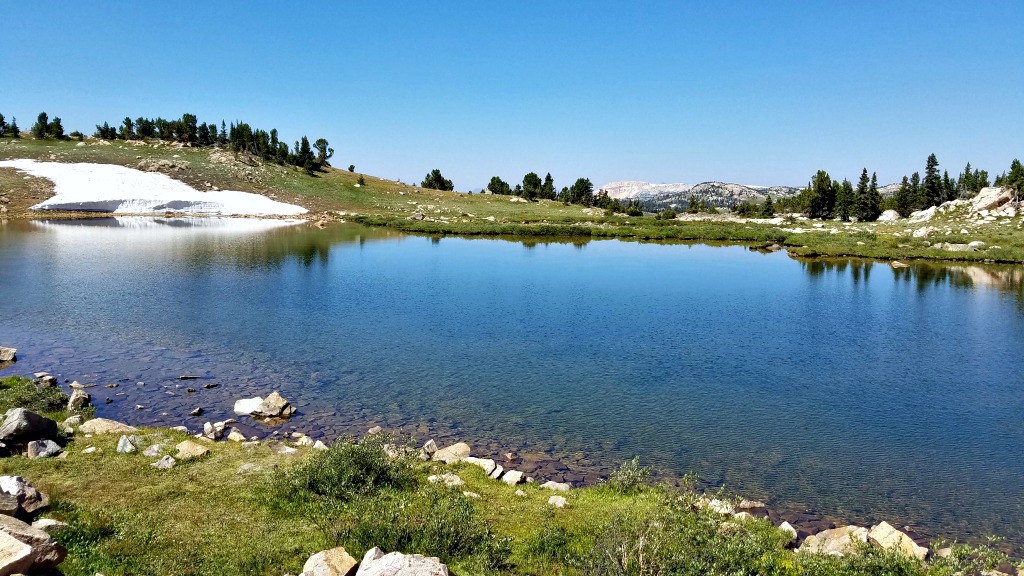 There was a beautiful, crystal clear lake with some snow on the opposite bank. We stopped for a bit just to marvel at how pristine the site was. Then it was on to Cooke City to explore a bit. And for some ice cream. 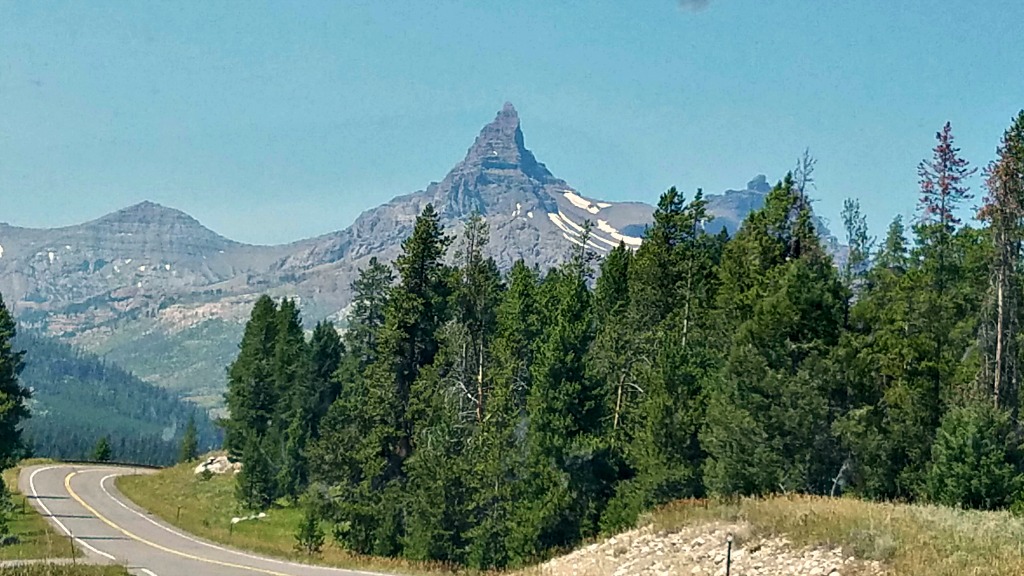 Even the view along the road was striking; this is Pilot Peak. I thought it was such an unusual looking mountain. It took me a while to figure out it’s name. After our short stop in Cooke City it was on to Livingston but to get there we had to go through my favorite National Park.

I didn’t realize that our trip to see this beautiful, scenic highway would also take me through part of Yellowstone National Park. Bear in mind that you do have to pay the entrance fee to the park to travel from Cooke City to Lewistown. I will note that for the three hours we were in the park we saw a grizzly bear, more bison than we could count, pronghorn and a fox. 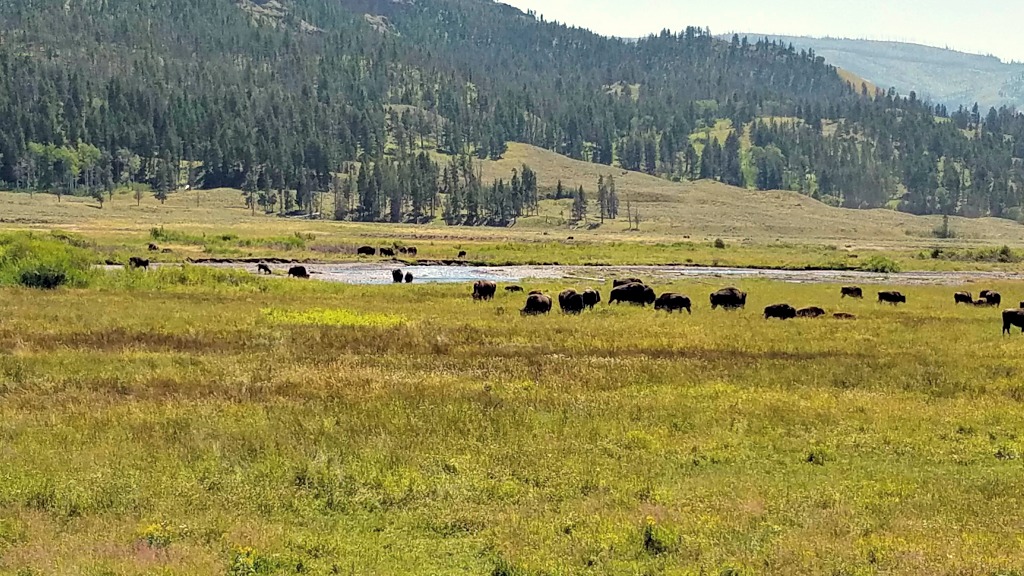 It was awesome. I could sit and watch the bison for hours. I find them so fascinating. They were taking dust baths, swimming in the river and just munching on the grass. We saw herd after herd after herd. 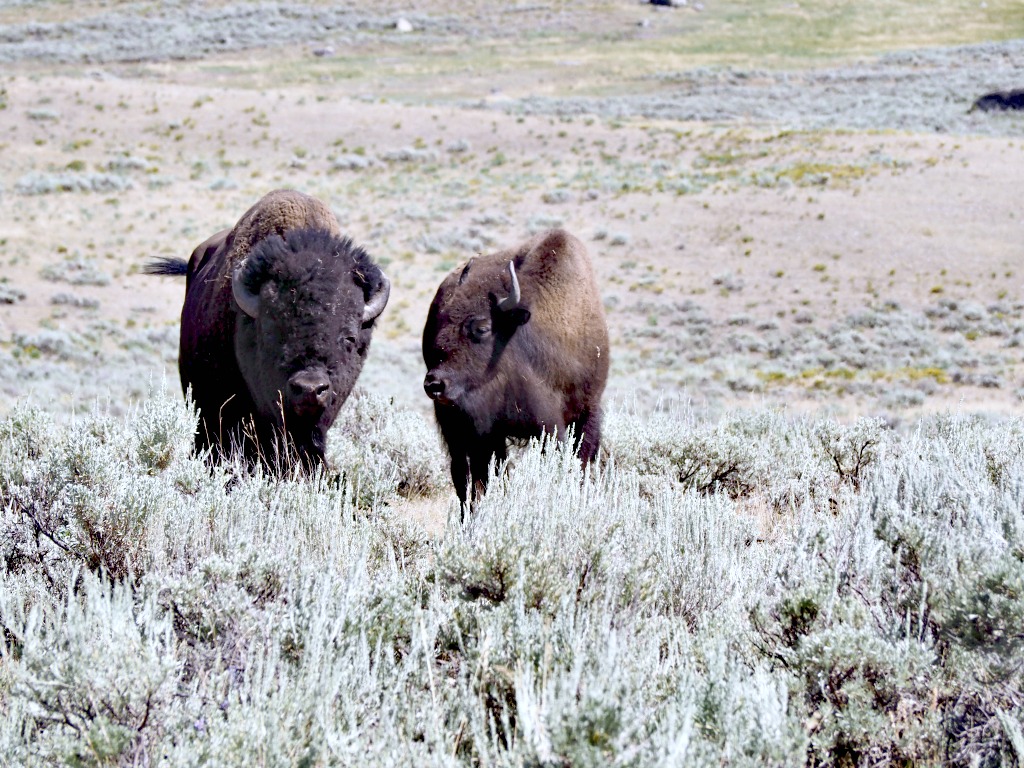 Most were somewhat distant but a few were closer to the road. You just can’t appreciate how big these animals are until you see one in person. 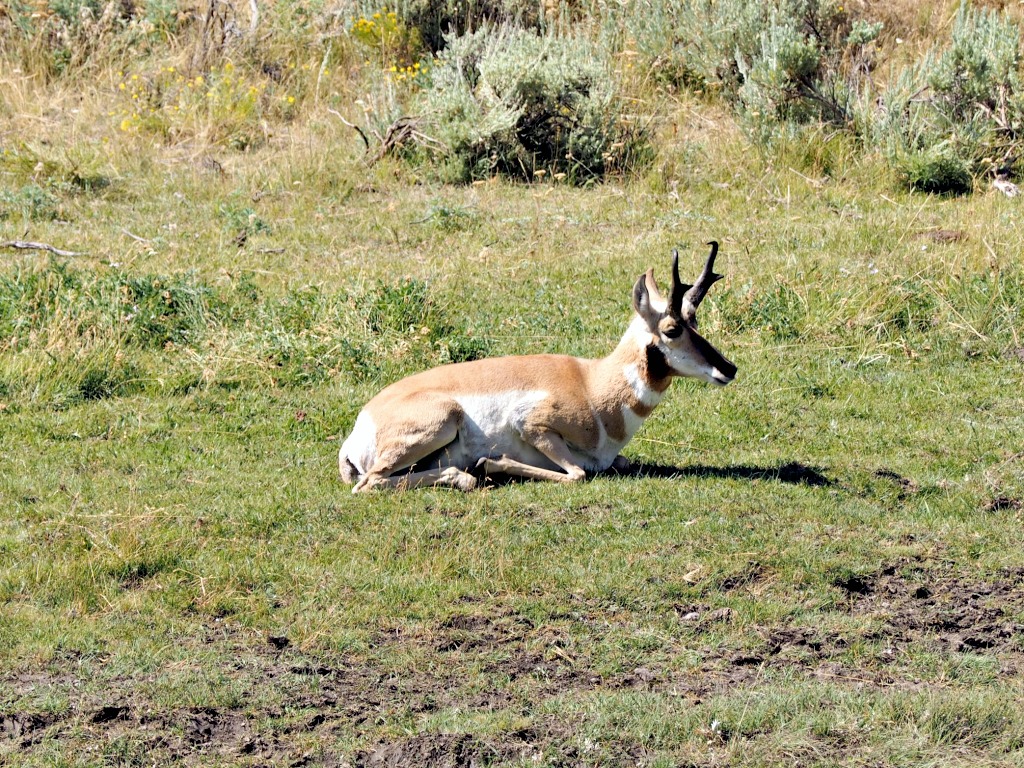 The pronghorns were just sitting in a field. The poor things were panting in the heat. I felt so badly for them but I’m sure all the animals were feeling the temps. I don’t have any photos of the grizzly as he (she?) was just too far away for any of our cameras to get a decent shot. It was a treat to just stand and watch him (her) walk and eat and just go about his (her) business. We saw the fox trotting along the side of the road as we exited the park.

Animal sightings aside the Lamar Valley is a beautiful place to visit even if you don’t see any animals. It’s also far less crowded than other parts of Yellowstone.

We came out of the park and made the rest of the drive to Livingston where we settled in to our hotel, went out for dinner and then went to sleep. It was a long but incredibly scenic day. We are already talking about doing the trip again only spending one of the nights at the top – there is a small shop/hotel just after the Wyoming pass. I can only imagine how beautiful the sky would be up there with no lights around.

Tomorrow I will offer tips for planning your trip to the Beartooth Highway and share where we stayed and the restaurants we tried while away. On Friday I’ll have a Farm Fashion Friday post that offers some great footwear tips for a trip like this.

I hope you enjoyed seeing the beauty that Montana has to offer as much as I enjoy discovering it.