I received a free copy of A Beauty Refined from Litfuse for my honest review. 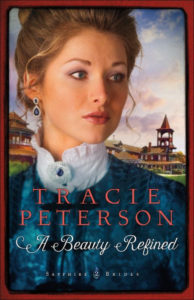 What does it take to reveal the true beauty of a hidden gem?

Phoebe Von Bergen, the daughter of a German count, is excited to visit America for the first time while her father purchases sapphires in Helena, Montana. Little does she know, however, that her father’s intentions—both for her and the gemstones—are not what she thinks.

Ian Harper, a lapidary working in Helena, finds the dignified young woman staying at the Broadwater Hotel more than a little intriguing. Yet the more he gets to know her, the more he realizes that her family story is based on a lie—a lie she has no knowledge of. And Ian believes he knows the only path that will lead her to freedom.

Meeting Ian has changed everything for Phoebe, and she begins to consider staying in America, regardless of her father’s plans. But she may not be prepared for the unexpected danger that results when her family’s deception begins to unravel.

Tracie Peterson is the award-winning author of over eighty novels, both historical and contemporary. Her avid research resonates in her stories, as seen in her bestselling Heirs of Montana, and Alaskan Quest series. Tracie and her family make their home in Montana.

I’ve strayed from reading these Christian fiction books for the most part since they tend to follow a similar plot and I’m atheist but this one intrigued me because it takes place in Montana and it’s got a subplot about sapphires. I’m a sucker for sparkly things and my home state so I thought I’d wade back in. I can’t say I’ll be reading them on a regular basis but this one was diverting enough to keep me entertained for an afternoon.

Phoebe van Bergen is visiting Montana with her father to explore Yogo sapphire mining for future investment – or so Phoebe things. He father is a man who expects a certain level of obedience from his daughter and since he is a nobleman feels himself better than those around him.

While in Montana Phoebe meets Ian Harper a very righteous (nauseatingly so) young man who has been hurt in the past and has sworn off of falling in love but the heart wants what the heart wants and he finds himself growing closer to Pheobe as he discovers that her father is not all he seems to be. Is it up to him to direct her to the truth?

The book flowed quickly with a traditional plot albeit with a couple of twists and turns that were unexpected. Phoebe and Ian are likable characters who keep the reader wanting to follow their relationship. The good guys are all good and the bad guys are very bad. What I like about a book like this is that it is easy to read with very little thought required. It provides a great escape for an afternoon. The over-proselytizing I just skim through. For those that are Christian I am sure those passages are comforting.

Little does Phoebe know that her father’s plans—for the sapphires and his daughter—are not what they seem. If you love historical fiction, romance, and adventure, don’t miss Tracie Peterson’s A Beauty Refined. When Phoebe meets Ian, everything changes. Yet the more he gets to know her, the more he realizes that her family story is based on a lie—a lie she has no knowledge of. And Ian believes he knows the only path that will lead her to freedom.

Join Tracie in celebrating the release of A Beauty Refined by entering to win her Precious Gems giveaway (details below) and by attending her author chat party on August 9!

One grand prize winner will receive:

Enter today by clicking the icon below. But hurry, the giveaway ends on 8/9. The winner will be announced at A Beauty Refined Facebook party. RSVP for a chance to connect with Tracie and fellow fans of historical fiction, as well as for a chance to win other prizes!

RSVP today and spread the word—tell your friends about the giveaway via FACEBOOK, TWITTER, or PINTEREST and increase your chances of winning. Hope to see you on the 9th!