I’m sure everyone has heard of Casanova, the legendary lover. But how many have heard of Casanova’s Secret Wife? I was sent a free copy of the book by Barbara Lynn-Davis by Historical Fiction Virtual Book Tours for my honest review. 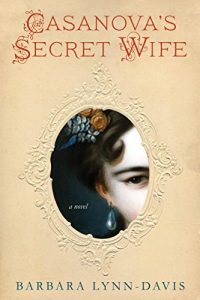 Set in eighteenth-century Venice and based on an actual account by Giacomo Casanova—here is a lush tale of desire and risk.

Caterina Capreta was an innocent girl of fourteen when she caught the attention of the world’s most infamous chronicler of seduction: Giacomo Casanova. Intoxicated by a fierce love, she wed Casanova in secret. But his shocking betrayal inspired her to commit an act that would mark her forever …

Now twenty years later on the island of Murano, the woman in possession of Caterina’s most devastating secret has appeared with a request she cannot refuse: to take in a noble-born girl whose scandalous love affair resembles her own. But the girl’s presence stirs up unwelcome memories of Caterina’s turbulent past. Tested like never before, she reveals the story of the man she will never forget.

Bringing to life a fascinating chapter in the history of Venice, Casanova’s Secret Wife is a tour de force that charts one woman’s journey through love and loss to redemption.

Barbara Lynn-Davis graduated from Brown University with a degree in art history. She then worked at the Peggy Guggenheim Museum in Venice and later spent a year there while completing her Ph.D. in Renaissance art at Princeton University.

She currently teaches art history and writing at Wellesley College, and lives outside Boston with her family.

For more information please visit Barbara Lynn-Davis’ website. You can also connect with her on Facebook and Goodreads.

I will be the first to admit that I didn’t know much about Casanova going into this book other than the definition attached to his name as a noun rather than anything about the man as a person.  This book uses Casanova’s diary as a starting point to create a story about a young (very young) woman in 18th century Venice who fell under his spell.

Caterina tells the story starting with her later life as she is asked to take in a young, pregnant girl who had been brought to a convent. It is a place she knows well for she had been sent there herself. The mother superior is an old enemy and knows that Caterina will be likely to accept the girl.

As the two settle in to living together Caterina slowly shares her story that starts when she is 14 and encompasses love, passion, deceit, betrayal, and more.

The novel takes what has become a popular method of storytelling lately – going back and forth in time with alternating chapters. Caterina also has her love letters from Casanova and they help to drive the chapters from the past. As she relives her past she hopes that her young charge can learn from her mistakes.

Overall I did enjoy this book. It was interesting to travel to Venice for a change in my reading. The city came alive in the book – the good and the bad. Ms. Lynn-Davis really brought the smells and sounds of living on the water to life. Caterina at times really aggravated me – especially when she was younger. Even when Casanova was treating her poorly she could see no wrong in him. Actually even looking back it was if she could still not see him for what he was – and what he was was a serial abuser of women. At least that is what we would call him in our time. Back then – who knows.

The story read quickly and was interesting, character flaws notwithstanding. It was truly fascinating to get a fictionalized peek into the life of a man who has left his mark on history. Maybe not in the best of ways – but we all know the name!