As the holidays approach I like to look around for cat toy gift ideas for a variety of reasons. I buy a few gifties for the Farm cats, I like to take a donation box to the shelter and I join a gift exchange with other cat bloggers. This post is sponsored by Hartz® but all opinions are my own. Hartz provided all of the toys you will see.

The Farm cats are older; the youngest one is Harry and he is 7 now. That only means that they have slowed down a little bit. They still get the wild and crazies for no good reason. Sherpa is 8, Stinky is 14+ and we have had Pumpkin for 11 years. We know he as older than 1 so he is at least 12 but we don’t know exactly how old he is.  They all still like to play as you will see

The Farm cats were sent an assortment of toys and I will tell you about them here but if you want to have some fun I suggest following along on my Facebook and Instagram because they have been sharing their Cat Toy “Game of Throwns” as they toss and throw the various toys about. The initial post on Instagram is HERE, on Facebook is HERE. It will continue for a few more days. 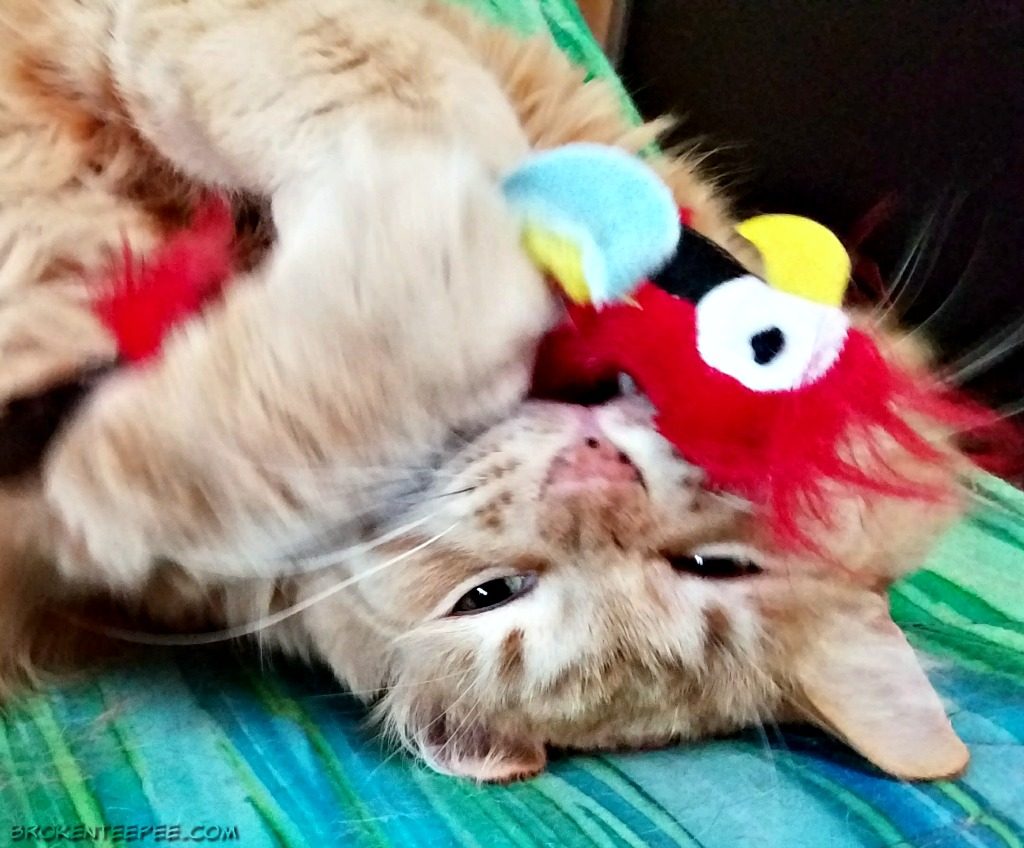 The Hartz Chirping Bird is by far the Farm cats favorite of the toys received. They already had a chirping toy and I knew they would enjoy this new one even more because of the feathers. 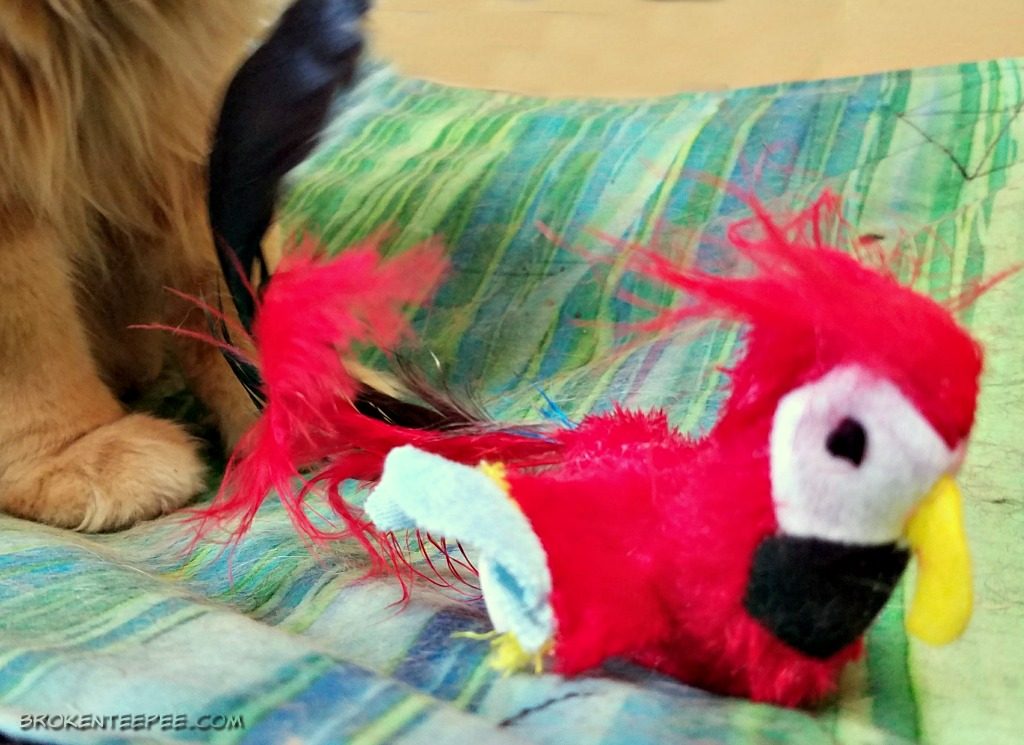 As you can see they are loving the Chirping Bird to death. When you have three cats fighting over one poor little bird you have to expect some….wear. 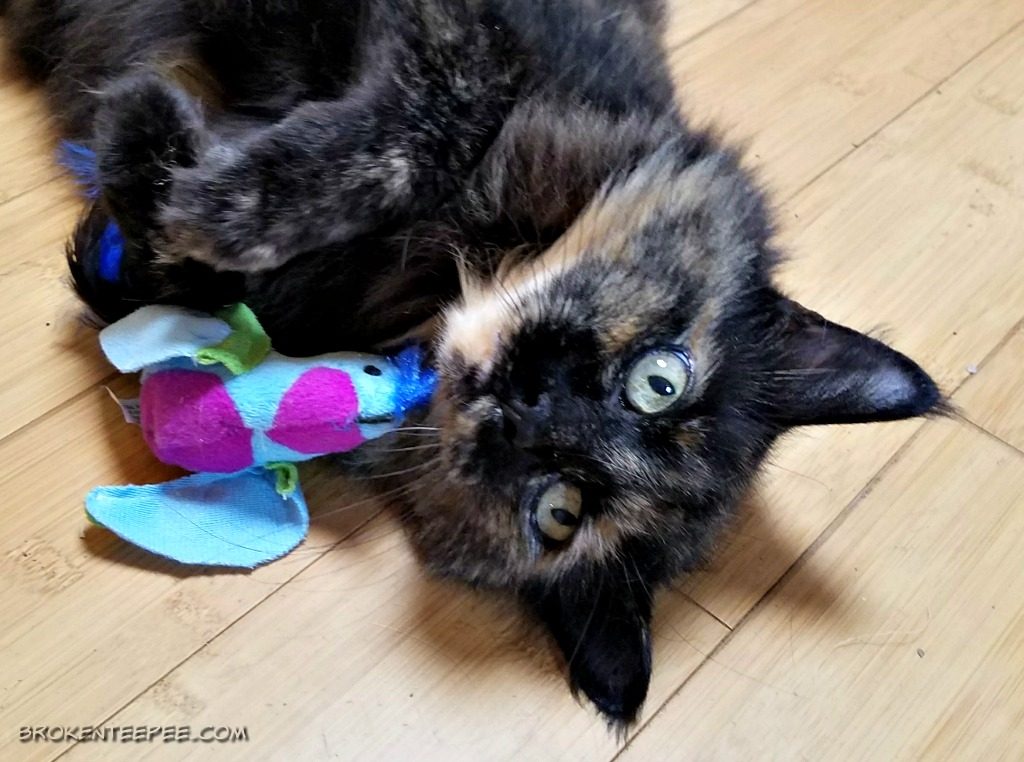 Good thing I had another Chirping Bird! Now there are two of them around the yurt which is good. I do pick them up at night – this would be my only negative about the chirping bird. One night I forgot and hearing that happy chirp, chirpity chirp at 2AM makes it not so well, happy. 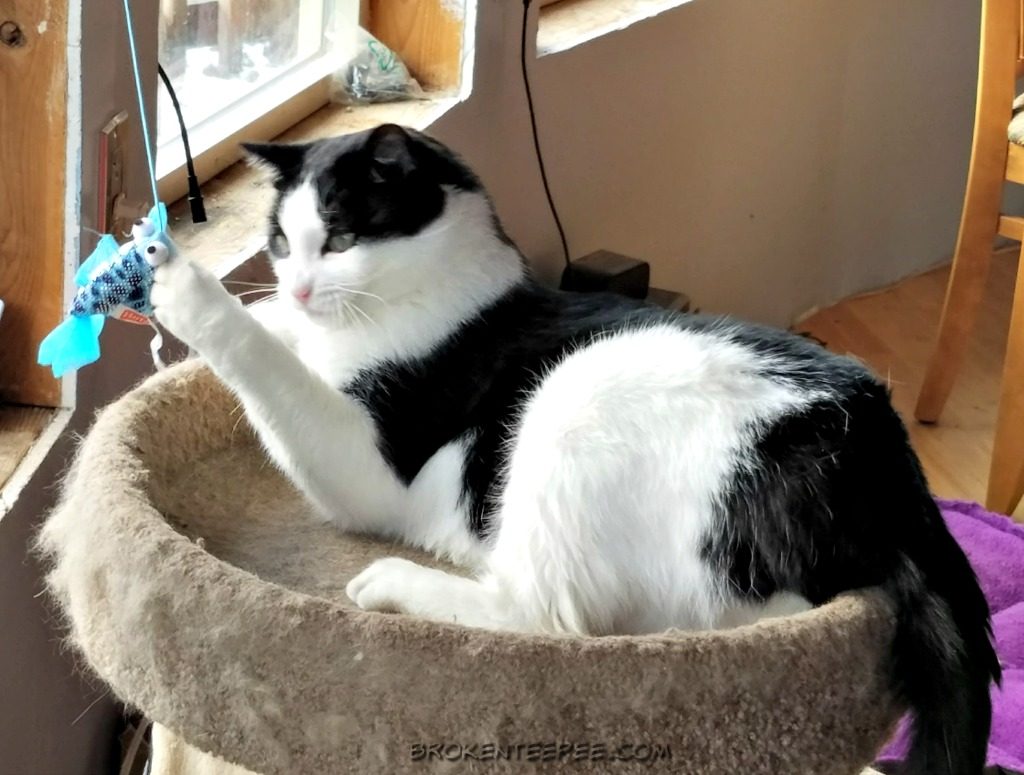 I have a myriad number of wand toys for the cats so at first I didn’t pay much attention to the Gone Fishin’ toy but then I noticed it had a suction cup. How cool! I stuck it on the window by their cat tree and this was a big winner.

Harry just loves it. I will find him up there batting at that fish several times a day. I saw one instance where both Sherpa and Harry where whacking it. So far the suction cup is holding very well. It has been up there for almost a week and it hasn’t fallen down once.

The Gone Fishin’ Toy is colorful, sparkly and has catnip. You can also take the wand out of the suction cup and use it like a normal wand toy. Win/Win! 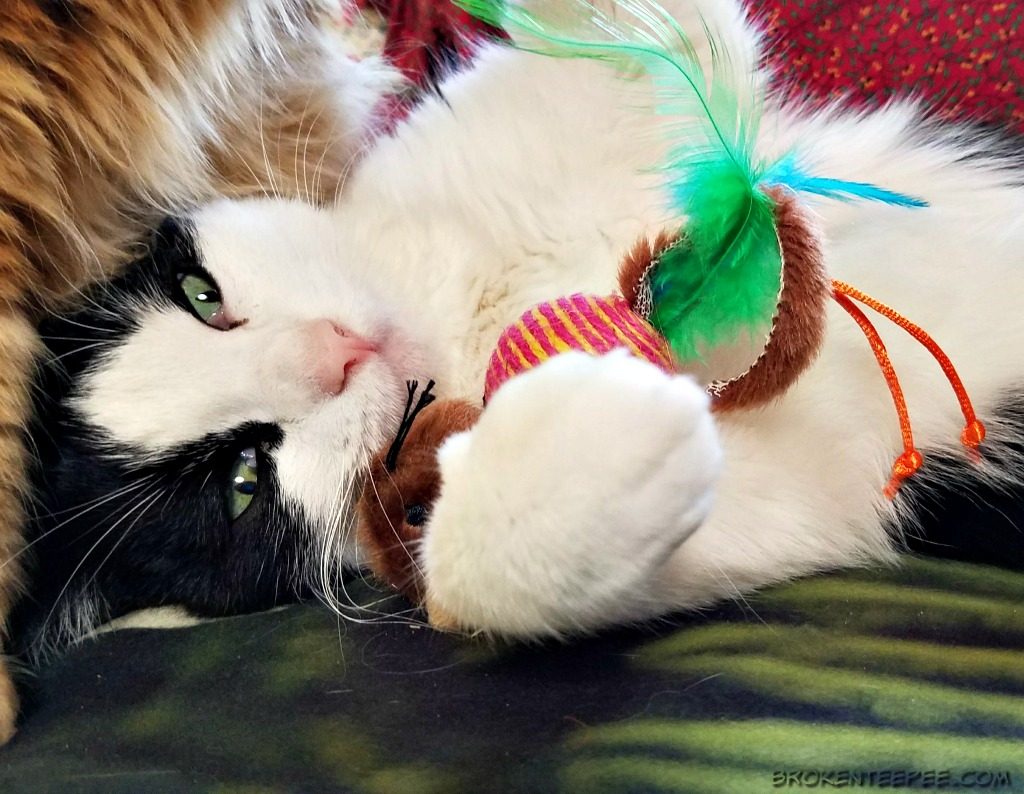 The Roll About Catnip Mouse was another toy that Sherpa and Harry were unwilling to “share.” This toy was a favorite because of the catnip for one thing, the feathers – do you sense a theme here? – and the sisal body. They love the sisal because they can pick it up with their claws and throw it – Game of “Throwns.” Get it now? 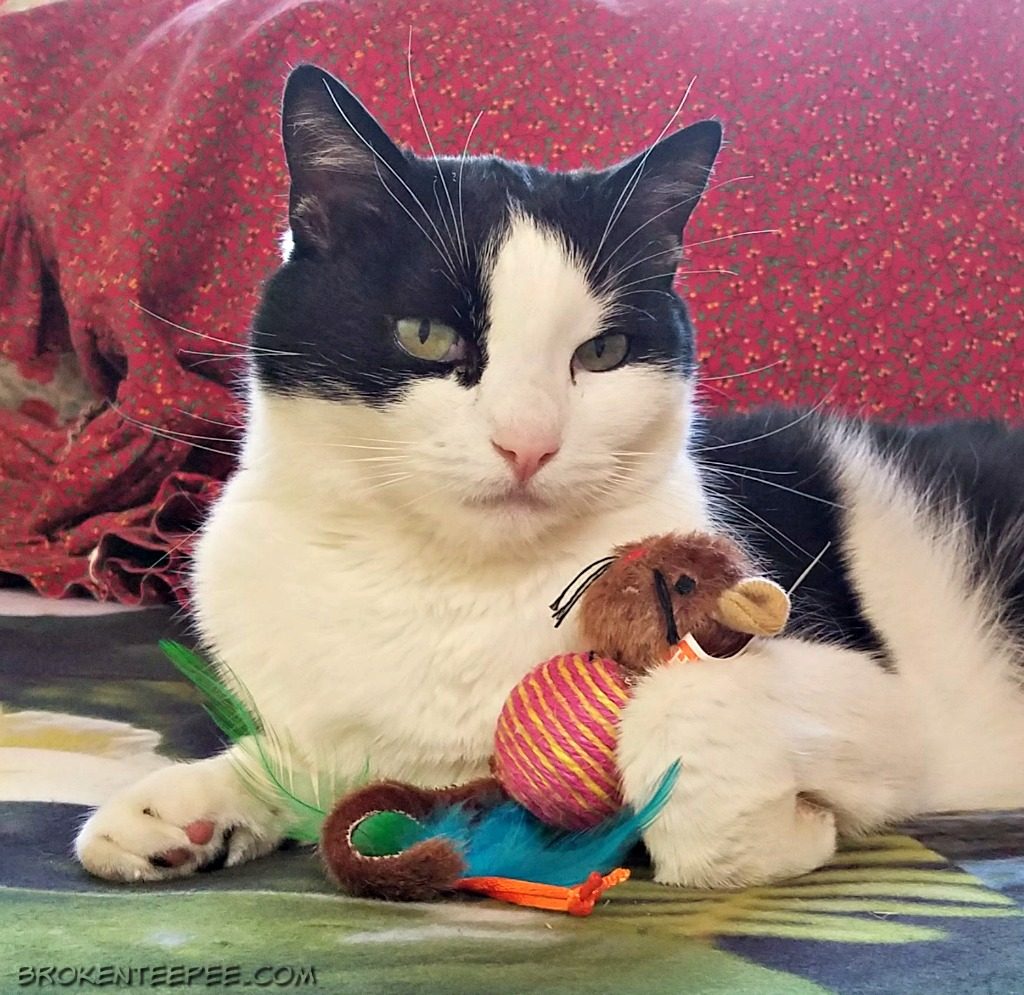 Harry ended up winning this particular battle but I doubt the war is over. I’m sure he’ll hide it somewhere safe and I’ll find it and then Sherpa will start playing with it. Oh – it has something inside of it so it makes a sound when it shakes. Like a mini maraca.

Hartz sent some other toys as well such as classic furry mini mice in a five pack. I haven’t opened them yet. The Farm cats love these little mice. The Twirl and Whirl has a small plush, catnip filled toy on a padded stick that you can use for interactive play with your cat. 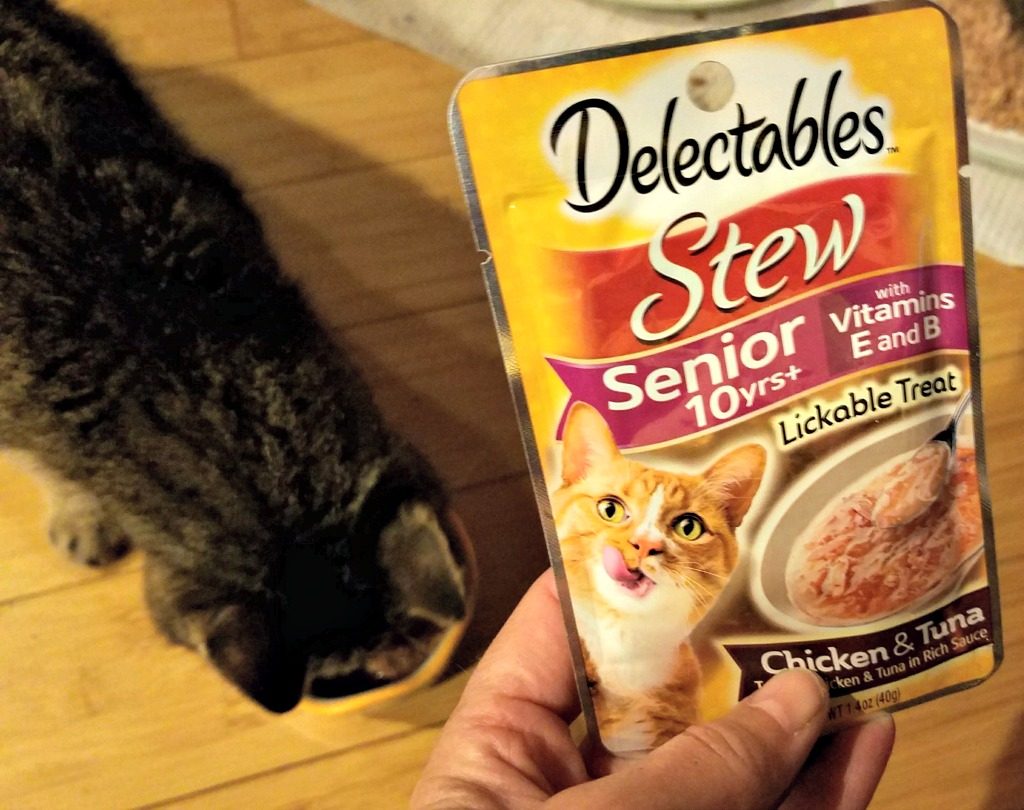 The Farm cats also received some Hartz Delectables Lickable Cat Treat and I was happy to see that all of them could eat it and not get sick. There are so few things that Sherpa and Pumpkin can eat with their sensitive tummies it’s nice to add something else for them to enjoy.

Thank you to Hartz

The Farm cats thank Hartz for sending them all of these cool toys to play with and the treats to eat. They think that your cats would enjoy any of these things for the holidays.