I was very excited when contacted about reviewing this book. I have not been lucky enough to see the wild mustangs but maybe one day. I was sent a copy of Cloud Wild Stallion of the Rockies by Ginger Kathrens at no charge for my honest review. 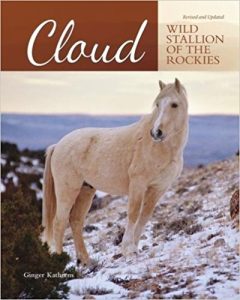 About Cloud Wild Stallion of the Rockies:

This bestselling book, originally published as a companion volume for public television’s Nature series, Cloud The Wild Stallion of the Rockies is documentary filmmaker Ginger Kathrens’s personal retelling of her years following the wild horse she named Cloud. Beautifully designed, the book is elaborately photographed and divided into seventeen chapters that follow the life of a wild stallion, just one of hundreds of horses that have roamed wild in the Rocky Mountains for two hundred years. The book begins with the author and filmmaker witnessing the birth of a helpless white colt, that will soon capture her heart and imagination. Each subsequent chapter documents Cloud’s interaction with his mare Raven, his brother Diamond, and other colts in the wild as well as his adventures encountering dangerous predators, older stallions, and human trappers. The author follows Cloud over the course of five years, taking note of his physical and behavioral development, as his begins to take on more of a leadership role in the band of wild bachelors he’s joined, to become a fighter, a survivor, and a father. Kathrens’s emotional involvement in Cloud’s story is palpable, such as when she tearfully watches the young stallion get captured by trappers. Due to his unusual coloration, he is set free, though the other members of his band and sisters are removed and sold. Returning to the mountains every season, the author continues to look for Cloud in the vast wild habitat, always relieved to find him still living, despite fights, predators, and encounters with trappers. She is later is touched to see how Cloud, the five-year-old mare, grazes with his yearling son, the first of his new family. Kathrens’s gripping observations of wild horses of the Arrowheads, their fights, struggles, and alliances, give the reader much insight into the fascinating behavior of these wild horses. Now published in paperback for the first time, this updated and fully redesigned volume coincides with the one year anniversary of the last sighting of Cloud.

Ginger Kathrens is an Emmy-winning TV documentary producer and president of Taurus Productions, a corporation she founded in the 1970s. She has produced documentaries for the Discovery Channel and NATURE and has contributed to productions for National Geographic, the BBC, and PBS. Her documentary filmmaking trips have taken her to Africa, Asia, Europe, Central and South America, and all over the United States. Ginger worked on over twenty segments of the PBS half-hour series Wild America from 1987 to 1996, including the two-part program Year of the Mustang, which introduced her to the Arrowhead Mountains and Raven’s band in early 1994. Since that time, Ginger has spent thousands of hours observing wild horses not only on Cloud’s home range but all over the western United States as well as on Cumberland Island off the coast of Georgia. She is a founder of the Wild Horse and Burro Freedom Alliance dedicated to the preservation of wild horses on public lands. Ginger lives in Colorado Springs with her Irish Terrier obedience dog, Ty. She also owns a ranch at the base of the Sangre de Cristo Mountains in southern Colorado, which her Spanish mustangs, Flint and Sky, and her Arrowhead mustang, Trace, share with the abundant wildlife of the Rockies.

This is a stunningly beautiful book. Even if you do nothing but look at the photos you will have a wonderful experience. But it is so much more. The story of this gorgeous horse is an absolute page turner. Ms. Kathrens has a love for her subject that just pours off the page; in both the story and the photos.

The book is a companion to a PBS documentary by the same name that I have to make time to watch but such is the power of the book  – I thought I had watched something rather than read something. The whole book comes together to offer the reader a book that will stay with them for long after they first open the cover.