Feeding the People: The Politics of the Potato by Rebecca Earle – Book Review

Every so I often I find the synopsis of a nonfiction book intriguing. I admit that I don’t read that many of them and most of them are historical in nature but sometimes one just appeals and such was the case with Feeding the People by Rebecca Earle. 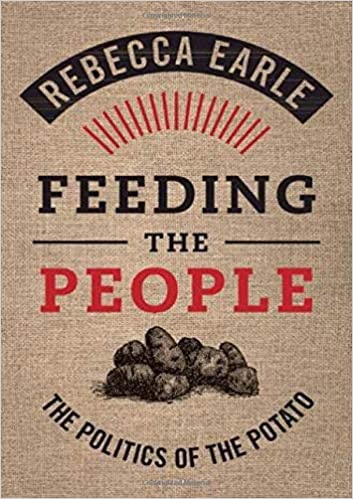 About Feeding the People:

Potatoes are the world’s fourth most important food crop, yet they were unknown to most of humanity before 1500. Feeding the People traces the global journey of this popular foodstuff from the Andes to everywhere. The potato’s global history reveals the ways in which our ideas about eating are entangled with the emergence of capitalism and its celebration of the free market. It also reminds us that ordinary people make history in ways that continue to shape our lives. Feeding the People tells the story of how eating became part of statecraft, and provides a new account of the global spread of one of the world’s most successful foods.

Rebecca Earle is Professor of History at the University of Warwick

Did you ever stop to consider the potato? I mean, almost everyone loves potatoes. Of course I am married to a man that could care less about them where I could eat them day and night – in fact potatoes are my go/to comfort food. But truthfully, I never really gave them much thought beyond all the different ways I can cook them. But there is more to the potato than how much you enjoy eating them.

From their origin in Peru. the potato traveled to Europe with the Spanish and from there they made their way to Ireland. From there it took a while for the spud to spread throughout the rest of Europe.  What surprised me is that the country that consumes the most potatoes is … CHINA. That I did not expect. Idaho is the largest producer of potatoes in the US but they weren’t cultivated there until 1836. China is the largest producer worldwide. Now you have some potato trivia for coctail parties.

But the power of the potato is nothing to shake a French fry at; like any food commodity there is money to be made a many points from planting to selling and that money drives the politics of the potato. It was interesting to read more about what goes on between the planting of the potato and its appearance at the store or in the farmer’s market.

Of course the potato has had it’s place in history from a staple food to bad years that led to the potato famine in Ireland. It’s a food that is eaten in just about every counry of the world but it’s also a food touted as inexpensive and useful for feeding large quantities of people for small quantities of money but that is not always the case and prices can fluctuate.

I found the book to be an interesting study in how a food stuff can be manipulated to suit purposes for financial or political gain.