I was sent a free copy with no expectation of review. 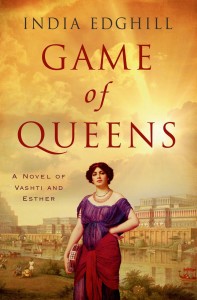 For fans of The Red Tent and The Dovekeepers, India Edghill breathes new life into the biblical story of Vashti and Esther with her signature historical richness, epic scope, and sweeping romance.
You may know part of the story already, but you only know what history has passed along. The story of how Vashti, Queen of Queens, the most beautiful woman in all the empire, defied the king her husband and so lost her crown. The story of how Ahasuerus, King of Kings, commanded that the most beautiful maidens be sent to his court so he might choose a new queen. And you may know how he set the queen’s crown upon the head of the virtuous and beautiful Esther, and how Queen Esther herself defied both king and law to save her people from a treacherous fate.

What India Edghill brings us in Game of Queens is the story of power and treachery, blood and deception, bravery and romance that surrounds the court of Ahasuerus and brings to life two of the most celebrated female heroines in all of history.

INDIA EDGHILL is a librarian living in the Mid-Hudson Valley in New York. She is the author of three other novels, Wisdom’s Daughter, which was a Romantic Times Nominee for Best Historical Fiction, Queenmaker, and Delilah.

You can read an excerpt of Game of Queens

I will admit to a love of Biblical fiction. I will also admit to a somewhat limited knowledge of Esther’s story. I will further admit that I was really rather thrilled when this book just showed up in my mailbox – I knew I was going to fit it into my reading schedule. I’m so glad I did – despite some small problems at the end Game of Queens is one of my favorite books of the year. I have no idea how much of the book is historically accurate; it’s a difficult time period for written records. I do know that the fictional story presented was one that kept me completely enthralled; I had a very had time putting the book down.

Vashti is the first wife of King Ahasuerus. They met as children and were under the rule of his mother. Vashti was a protected child and soon became very spoiled in the rich atmosphere of the palace. This soon led to resentments. I won’t go into everything for I don’t want to spoil the story but her banishment ultimately leads to a call going out to all of the Kingdom for the most beautiful maidens to come to the palace to be presented to the king so a new wife can be chosen. This leads to Esther being queen.

But the book is so much more than that. It also shares the story of Daniel – who is far more than the story of the lion’s den. It encompasses the evil that is Haman – the man who would have eliminated all of the Jews. Just because. He is evil personified. There is love, revenge, hate, lies, plotting and a pet wolf.

The only issues I had with this novel came towards the end. One chapter seem apropos of nothing and with information that advances the story before it seems appropriate. Then the last few chapters seem rushed. Other than that I was truly enthralled with this book and it’s story. I’ll be keeping it for another read when I have the time.