The Library of Light and Shadow by M.J. Rose – Book Review

I have long been a fan of M.J. Rose so I was very excited to be offered her latest book to review. The Library of Light and Shadow is the next installment in the Daughters of La Lune series. It was sent to me at no charge for my honest review. 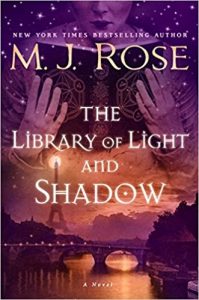 About The Library of Light and Shadow:

In this riveting and richly drawn novel from “one of the master storytellers of historical fiction” (New York Times bestselling author Beatriz Williams), a talented young artist flees New York for the South of France after one of her scandalous drawings reveals a dark secret—and triggers a terrible tragedy.

In the wake of a dark and brutal World War, the glitz and glamour of 1925 Manhattan shine like a beacon for the high society set, desperate to keep their gaze firmly fixed to the future. But Delphine Duplessi sees more than most. At a time in her career when she could easily be unknown and penniless, like so many of her classmates from L’École des Beaux Arts, in America she has gained notoriety for her stunning “shadow portraits” that frequently expose her subjects’ most scandalous secrets. Most nights Delphine doesn’t mind that her gift has become mere entertainment—a party trick—for the fashionable crowd.

Then, on a snowy night in February, in a penthouse high above Fifth Avenue, Delphine’s mystical talent leads to a tragedy between two brothers. Devastated and disconsolate, Delphine renounces her gift and returns to her old life in the south of France where Picasso, Matisse, and the Fitzgeralds are summering. There, Delphine is thrust into recapturing the past. First by her charismatic twin brother and business manager Sebastian who attempts to cajole her back to work and into co-dependence, then by the world famous opera singer Emma Calvé, who is obsessed with the writings of the fourteenth-century alchemist Nicolas Flamel. And finally by her ex-lover Mathieu, who is determined to lure her back into his arms, unaware of the danger that led Delphine to flee Paris for New York five years before.

Trapped in an ancient chateau where hidden knowledge lurks in the shadows, Delphine questions everything and everyone she loves the most—her art, her magick, her family, and Mathieu—in an effort to accept them as the gifts they are. Only there can she shed her fear of loving and living with her eyes wide open.

New York Times bestselling author M. J. Rose grew up in New York City exploring the labyrinthine galleries of the Metropolitan Museum and the dark tunnels and lush gardens of Central Park. She is the author of more than a dozen novels, the co-president and founding board member of International Thriller Writers, and the founder of the first marketing company for authors, AuthorBuzz.com. She lives in Greenwich, Connecticut. Visit her online at MJRose.com.

This is the third book in the Daughters of La Lune series and it focuses on Delphine, a young woman who does shadow paintings. She has the ability to paint the subjects deepest secrets. Sometimes this leads to problems as one can imagine.

Delphine is a twin and she and her brother Sebastian have a very close relationship. He acts as a manager for her artwork and she trusts him as she trust no one other than her mother. He does not have any of the magical abilities of the women of the family and while he claims to be OK with this one wonders. Delphine had run away to New York but after a disaster there she is back in France and he is now pressuring her to go back to her shadow painting when she does not want to because of the consequences. But it is not a person he wants her to paint – it is a house.

What will Delphine see as she paints the house? What secrets is it holding? The lucky readers of The Library of Light and Shadow find themselves immersed in a magical, mystical world where magick can happen if you are in the right place. I always enjoy Ms. Rose’s books for their mix of history, realism and fantasy. She manages to blend it all together in a tale that rings true.

The post WWI period was a time when people were searching for a way to speak with the ones they lost in the war so there was a rise in spiritualism – much of it motivated by greed. I think we all long to know what happens after we die and those desires play strong in this book.

There are characters from the other two books in the series but they are truly background and you really do not need to have read the other books to enjoy this one. In fact, I have not read The Witch of Painted Sorrows which is the first book and I felt no loss whatsoever. The details of the second book are mentioned only in passing.

I recommend this book for anyone looking for a departure from traditional historical fiction. Obviously with the fantasy/magic elements the reader must be able to suspend belief but the reward is a delight of a book with diverse characters and a wonderful story.

Other Books by M.J. Rose:

The Secret Language of Stones

The Book of Lost Fragrances

The Collector of Dying Breaths

Yum
Share
Email
M.J. RoseThe Library of Light and Shadow
How to Start a Small Farm – Small Farm Living as Part of our Healthy Lifestyle
A Beautiful Poison by Lydia Kang – Book Review