I received a free copy of The Life and Times of Persimmon Wilson from Atria Books for my honest review. 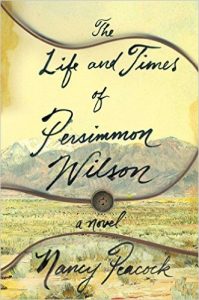 I have been to hangings before, but never my own.

Sitting in a jail cell on the eve of his hanging, April 1, 1875, freedman Persimmon “Persy” Wilson wants nothing more than to leave some record of the truth—his truth. He may be guilty, but not of what he stands accused: the kidnapping and rape of his former master’s wife.

In 1860, Persy had been sold to Sweetmore, a Louisiana sugar plantation, alongside a striking, light-skinned house slave named Chloe. Their deep and instant connection fueled a love affair and inspired plans to escape their owner, Master Wilson, who claimed Chloe as his concubine. But on the eve of the Union Army’s attack on New Orleans, Wilson shot Persy, leaving him for dead, and fled with Chloe and his other slaves to Texas. So began Persy’s journey across the frontier, determined to reunite with his lost love. Along the way, he would be captured by the Comanche, his only chance of survival to prove himself fierce and unbreakable enough to become a warrior. His odyssey of warfare, heartbreak, unlikely friendships, and newfound family would change the very core of his identity and teach him the meaning and the price of freedom.

Nancy Peacock is the author of the novels Life Without Water and Home Across the Road, as well as the memoir, A Broom of One’s Own: Words on Writing, Housecleaning, and Life. She currently teaches writing classes and workshops in and around Chapel Hill, North Carolina, where she lives with her husband Ben.

This was a powerful read – it’s my first 5 star read for the year. The book starts as Persimmon Wilson sits in jail awaiting his hanging. He sets about writing his story so that, as he notes, the truth will be told because as he notes the stories being told about him are not the whole truth. He did not kidnap and rape anyone. He wants the world to know his tale – not that he for one minute believes that his words will be read or taken for the truth.

Persimmon’s first master was a woman who treated her slaves more compassionately than most. She even went so far as to to teach them to read and write – which was very dangerous. Unfortunately things did not work out there and Persimmon and all of the slaves were sold. He ended up with a man who owns a sugarcane plantation in Louisiana along with some other men and a beautiful woman. This woman, Chloe and Persimmon find a spark between them but their new master has designs on Chloe. Persy goes to the fields and Chloe to the big house where she ostensibly cares for the master’s sick wife but she is there at his beck and call. Despite this Persy and Chloe manage to see each other despite the danger.

As the Civil War looms and emancipation is in the air the master hightails it to Texas. Persy has the opportunity to escape but he won’t leave Chloe. This leads to a confrontation with the master that leaves Chloe thinking he is dead. And he nearly is but he is saved and is determined to find her even though he knows nothing more than they are in Texas.  The War might have freed the slaves but folks in Texas haven’t quite accepted the reality so Persy has to be careful – he fortunately hooks up with a man who doesn’t care about his color and they head out to work a ranch. They just have to beware the Cherokee who are raiding.

Just as Persy learns where Chloe is he gets captured. At this point he about doesn’t care whether he lives or dies. He ends up becoming part of the tribe and this leads to the next chapter of his life. The one where he is the most free.

This book was riveting. I had the world’s worst time putting it down and I’m keeping it to read again. As tough as that will be because Ms. Peacock does not spare her readers when dealing with the more difficult aspects of slavery, rape, war, injustice – anything. It’s very well written and not at all gratuitous but it can be difficult to read. To understand how humans can be towards one another. These characters stay with you – they are so well developed they become real. You feel a part of their world and feel their emotions. I will note that the ending is absolutely heartbreaking. It brought tears to my eyes and it took me a while for it to stop invading my thoughts.

The Life and Times of Persimmon Wilson is a book that will challenge and that will make you think. It’s well worth adding to a library.