What to do in Missoula – The Western Montana Fair

As the hubby and I continue to get away from the Farm a bit we are exploring what to do in Missoula, and it’s environs. This is the first year since we’ve been here that we’ve been able to get down to the Western Montana Fair. I’ve wanted to go for a while but the summer timing just never worked with his needing to be in town for fire season. The only other fair we’ve been to other than our own Mineral County Fair was the one in Ravalli County and that was because we went to a wedding. It was a beautiful wedding and a fun way to end the day. 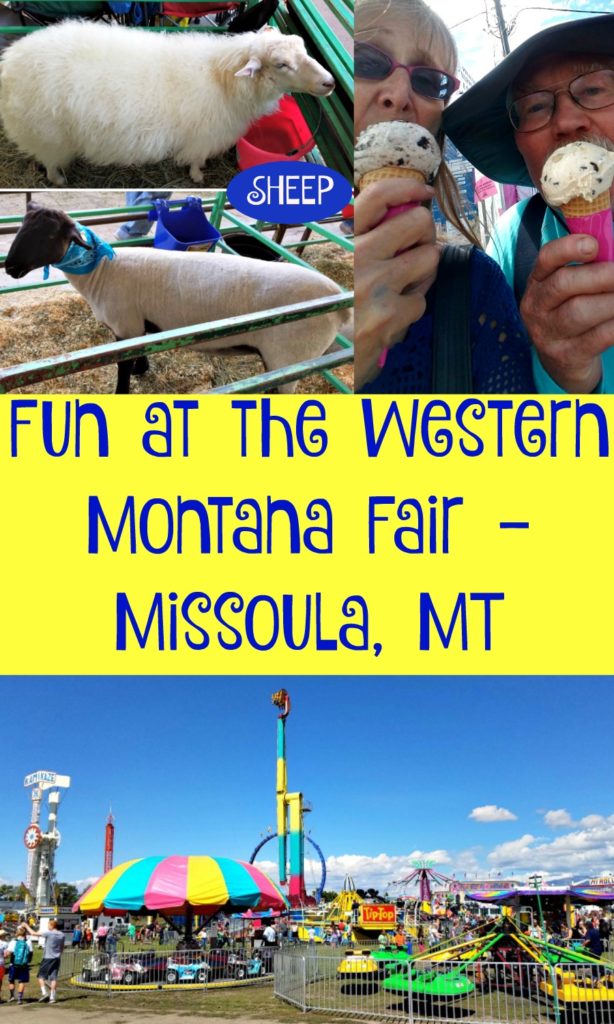 But back to the Western Montana Fair – it’s Missoula’s entry into the Fair network. There is a pretty regular list of Fairs here in Montana and they are held on the same weekends every year to coincide with Rodeo schedules so that makes it easy to make plans. I’m going to let you in on a little secret – I LOVE fairs. When we were traveling about in the trailer I would make the hubby take me to every fair we saw. It’s the animals – I just love the animals.

I will embarrass myself now. We were at a fair in Arizona somewhere and we were walking about and I saw the sheep section. AND THEY WERE NAKED. Only this was before I knew anything about farm animals at all. I asked the very cute 4H girl why the sheep were naked. She gets all the credit in the world for not laughing at me (at least not until I left)  she just explained to me about shearing and all that was involved with her sheep. What a sweetie. 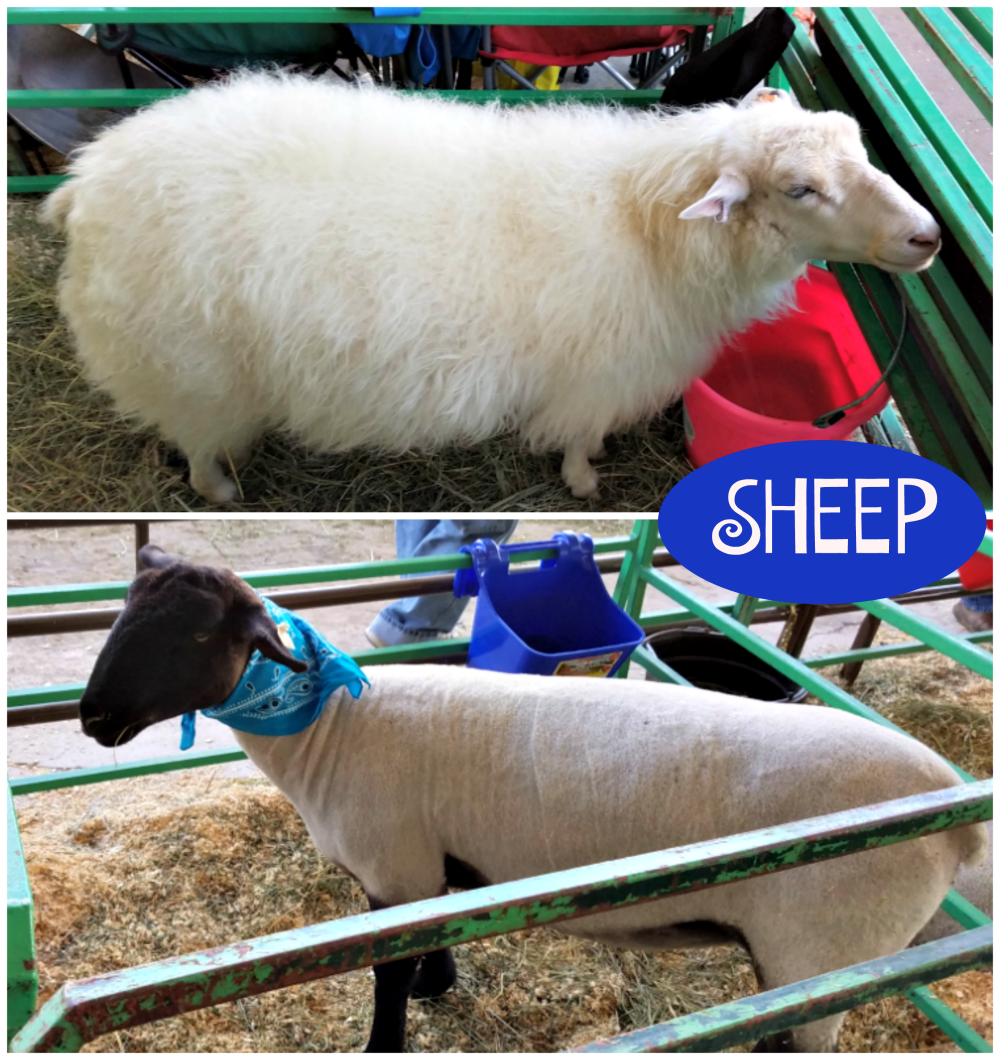 We saw many sheep at this fair and yes most of the were nekkid including the stylin’ one above with the lovely bandana. The furry sheep in the other photo was the only sheep I saw that still had its coat. There were a LOT of sheep at the Western Montana Fair. I think they are the most popular animal. (Other than chickens perhaps.)

Second most popular were the steers. This is only a small sampling. There were many, many more. Most of them were doing just what these were doing, IE, not much.

Yes, There Were Goats

I wouldn’t not discuss goats! Goats being goats, most of them were trying to eat out of the pens next to them ’cause the grain is tastier or something like that. I have no idea what the spandex outfits are all about. If someone can tell me, I’d love to know. I kept calling them “supergoats.” Some of the sheep had them too. It was rather funny. I did run into one test 4H young lady who tried to tell me about goat behavior. I just listened and smiled. 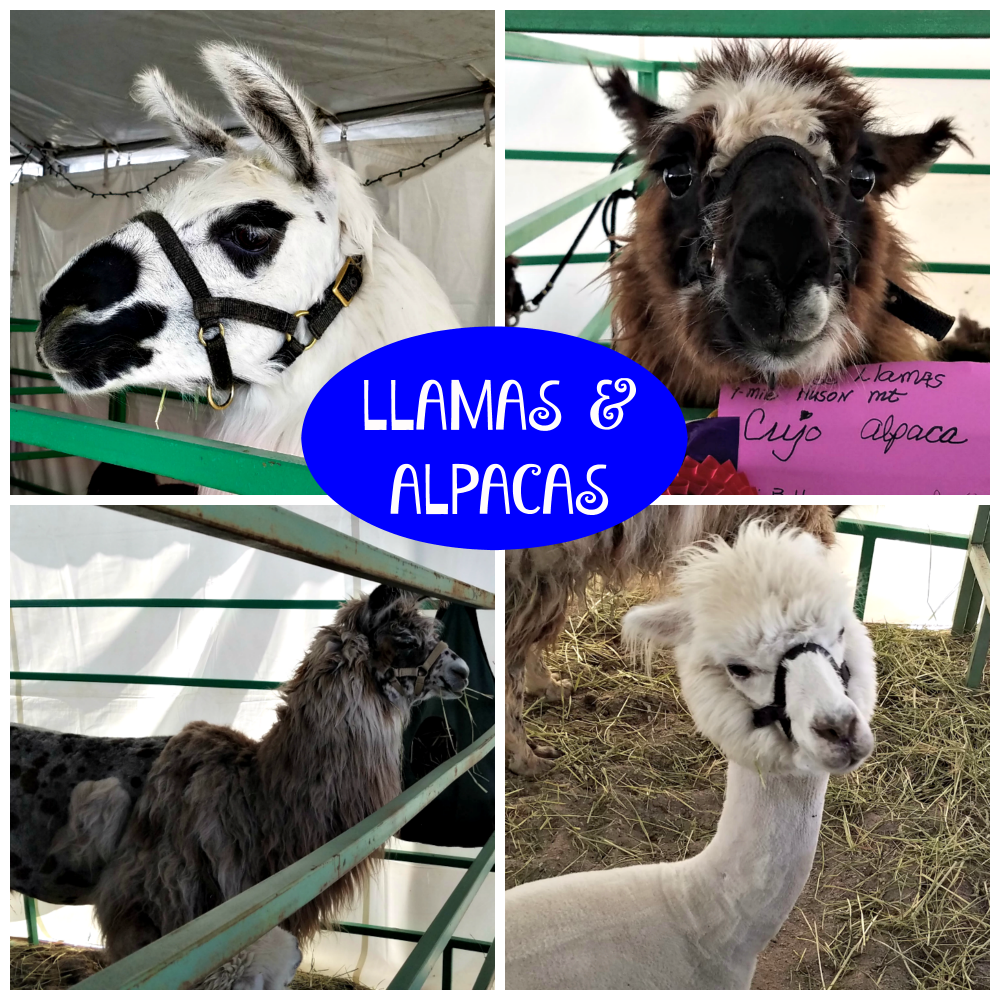 After the goats my next favorite exhibit was the Llama and Alpaca barn. I do llove llamas. They just look like they are so superior to every living thing around them. What was even more fun – see the cute white alpaca? She belongs to the lady that took Jenn and Debbie! I got an update on how they are doing. They have settled in very well and have been out to a couple of nursing homes already as part of their therapy goat training. Isn’t that wonderful? That made my day!

More to Do Than Visit Animals

Anyone going to the Western Montana Fair will have a grand time visiting the animal barns. There were also exhibits for chickens, ducks, geese and rabbits but the lighting was bad and none of my photos came out. A petting zoo is available for the little ones to be able to get up close an personal with different animals. The show animals aren’t always available to be pet or are not of a temperament for small children. 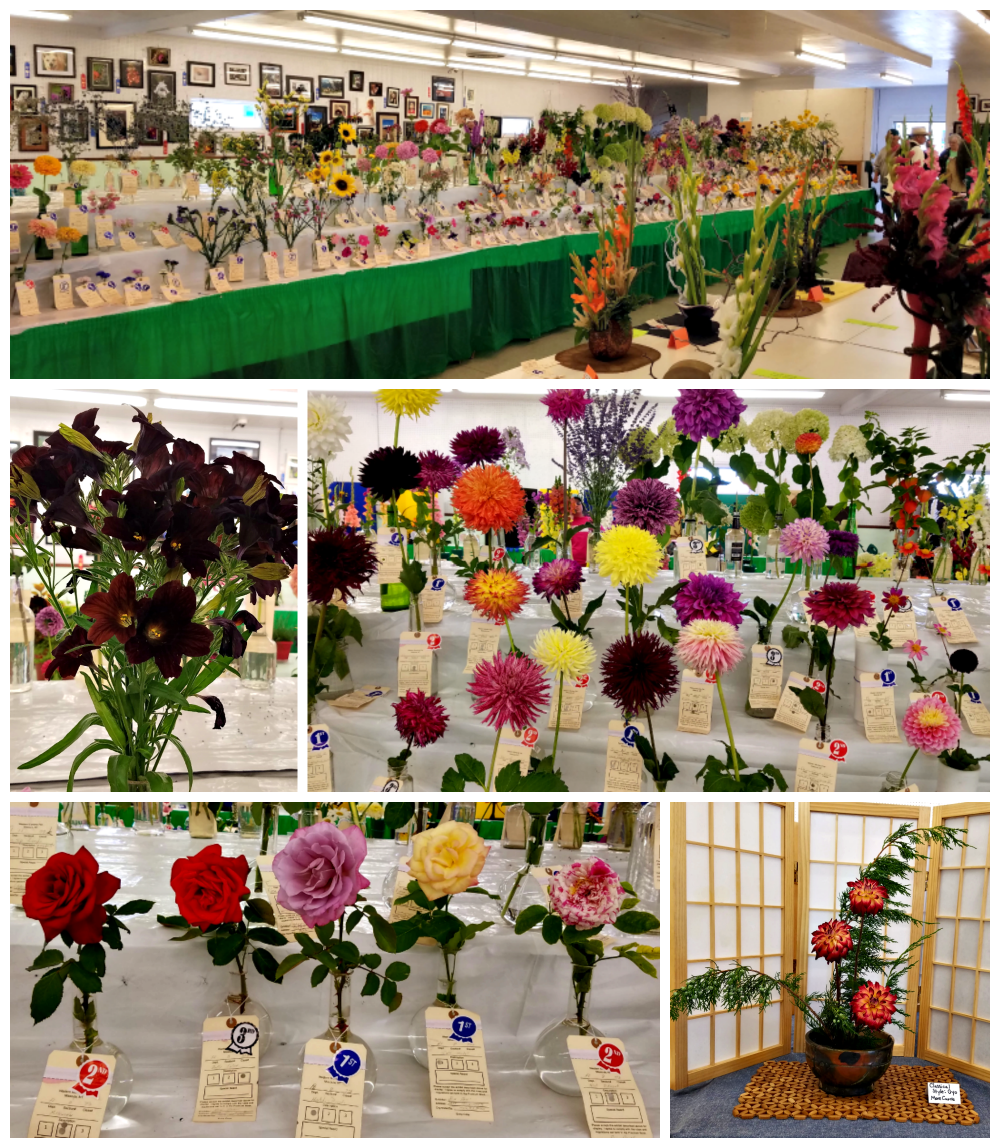 Like any fair there are also many other exhibits. One of my favorites here was the floriculture exhibit – oh, the flowers! We walked in and the room smelled like heaven. Obviously there are a lot of talented gardeners in Missoula and its environs. There were sections for single flowers, bunches,  arrangements and Ikebana – or Japanese flower arrangements. Aren’t those roses stunning? The gladiolas were beautiful too – but again, my photos didn’t come out well. 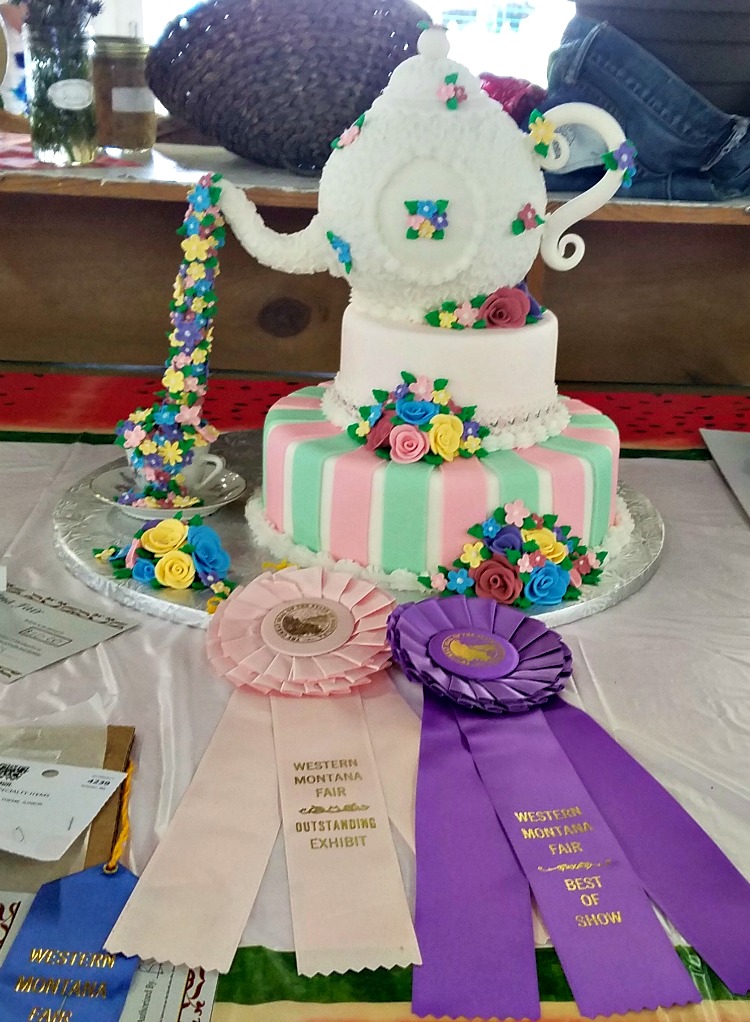 There were many lovely looking baked goods, some cakes and cupcakes. This teapot cake really stood out and it rather deservedly took several ribbons. It’s hard to tell from the photo but the pot is “pouring” little tiny flowers and each one was so detailed. It really was a stunner of a cake. 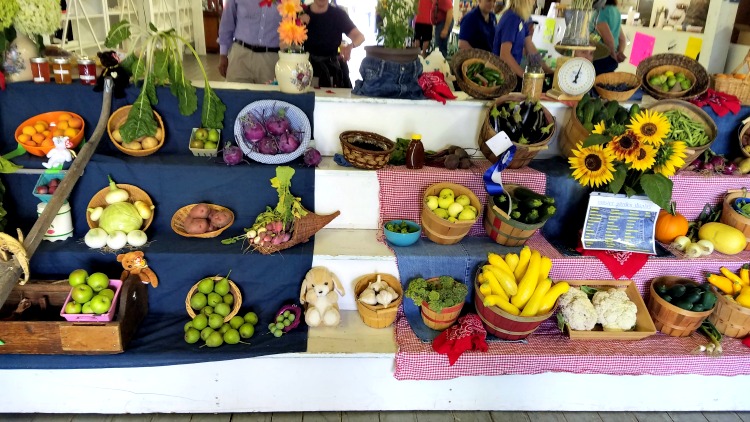 Check out the display of vegetables and fruits – I was very surprised to see apples already! There were onions, carrots, cabbage, zucchini, potatoes – well, everything that can be grown in a garden. All were perfection. 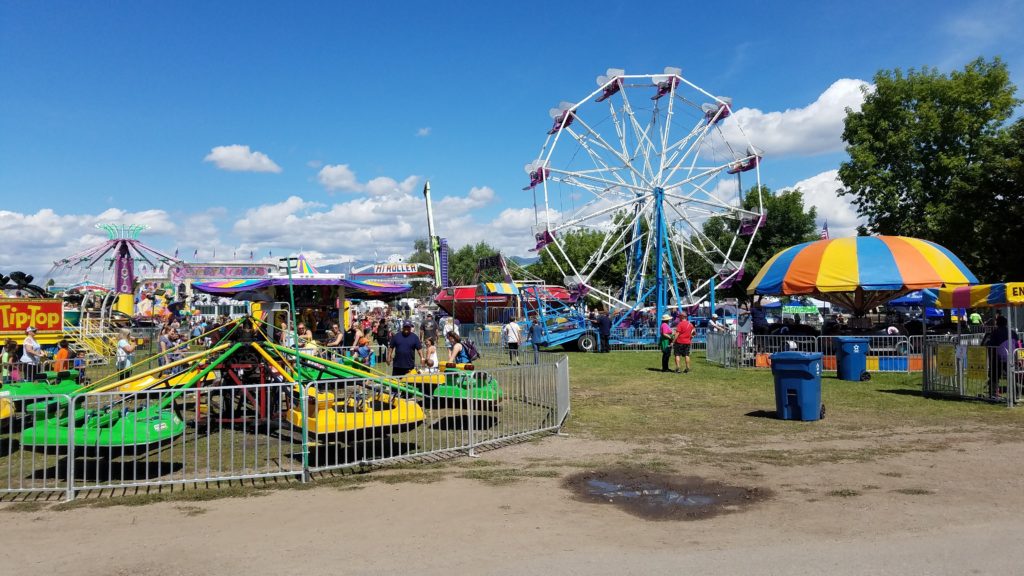 The midway was full of fun rides for the children – and adults! We went on Thursday afternoon which was an excellent time to be there. Everything was up and operational but it wasn’t crowded at all. I had saved two coupons from the local paper that gave us each $1 off admission and as it turned out we BOTH were eligible for the “senior” admission price so it was only $6 for both of us to get in. What a bargain for an afternoon’s fun.

There was a wide selection of “fair food” which is half of the reason for being at a fair! We both decided on Philly cheesesteaks and they were pretty good. Not quite like what you get in the city of my birth but not bad at all. He had his loaded with onions and peppers and I had mine with just cheese. I said to the hubby the biggest problem is they weren’t greasy enough! 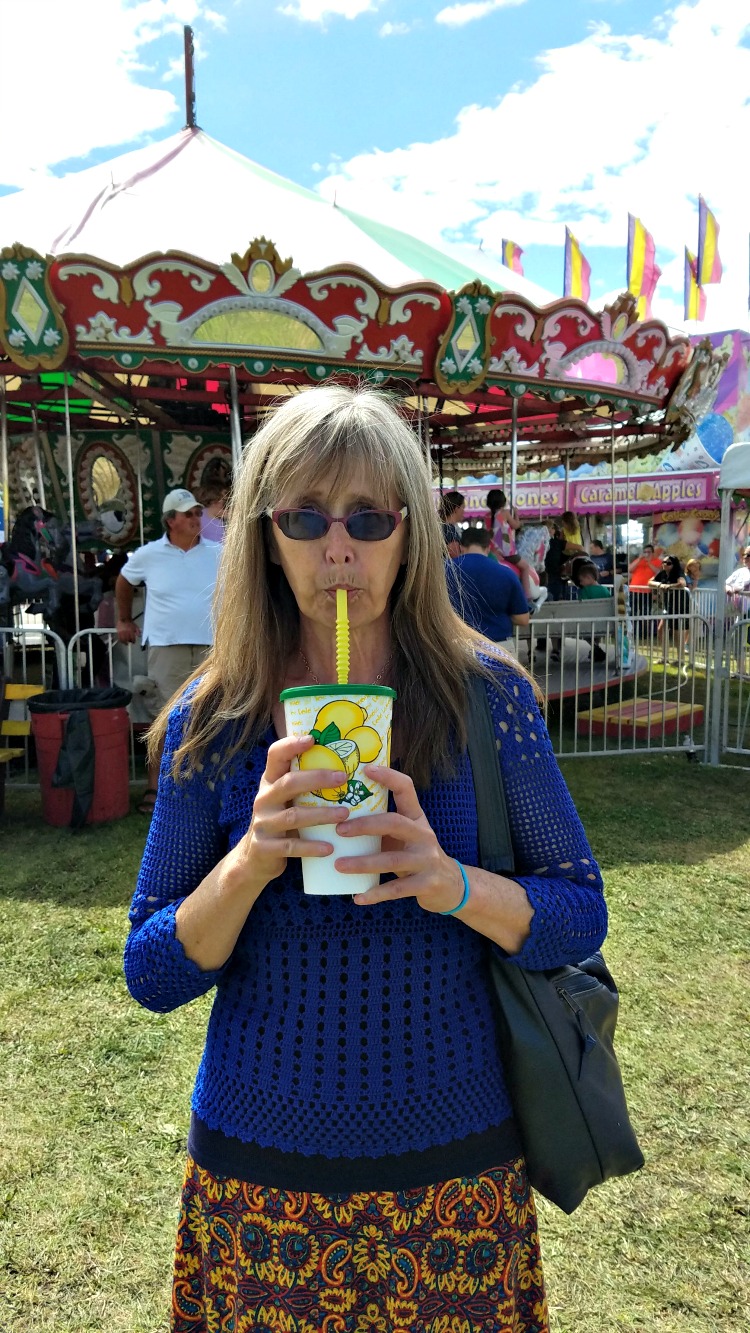 Afterward we had some fresh squeezed lemonade. It was just sweet enough – it still had the edge of tart. We both enjoyed our drinks. From there it was sharing a Fry Bread. That wasn’t as successful. It was a fundraising booth for the Hellgate High School band and for whatever reason they didn’t put powdered sugar on it so it was – well, fried bread and nothing else. 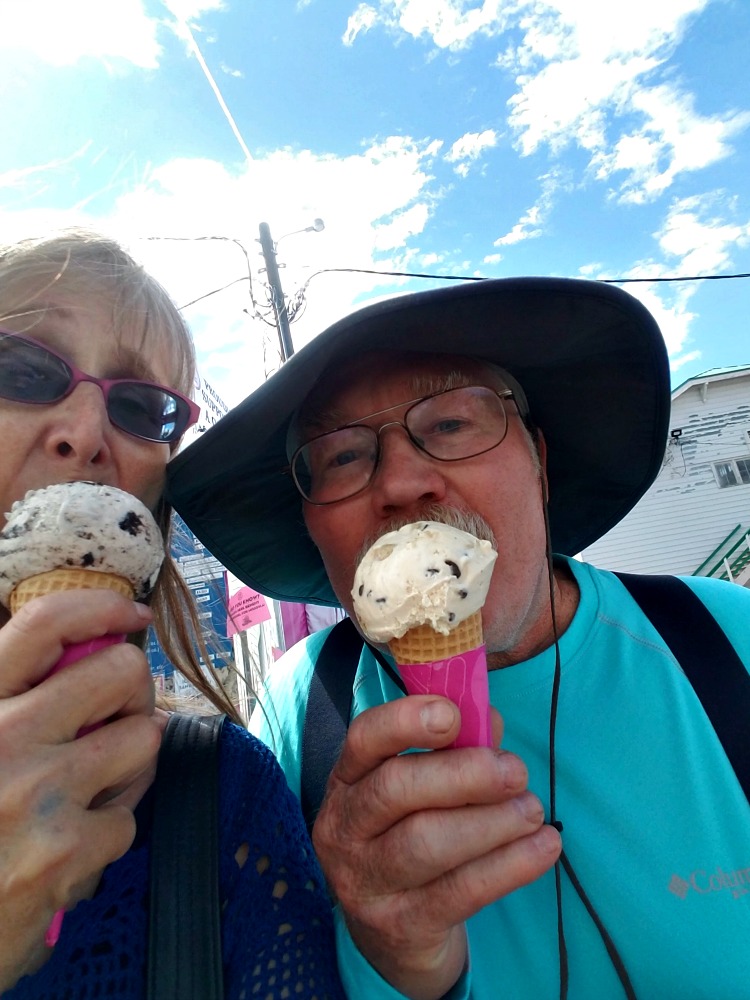 A Day of Family Fun for All

We did end our night on a sweet note with ice cream cones. That was the perfect way to end our day at the Western Montana Fair. If you are going to be in the Missoula area for the second weekend in August I can highly recommend the fair for a fun day of family fun.