It’s time for another great book review! Today I bring you No Man’s Land by Simon Tolkien – he’s the grandson of J.R.R. Tolkien – and the book is inspired by his grandfather’s experiences. I would like to thank thank the publisher for sending the book to me at no cost. My thoughts are of course, all my own. 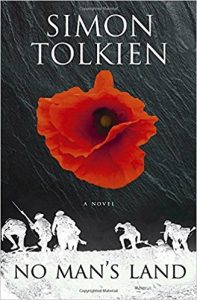 About No Man’s Land:

Adam Raine is a boy cursed by misfortune. His impoverished childhood in turn-of-the-century London comes to a sudden and tragic end when his mother is killed in a workers’ protest march. His father, Daniel, is barely able to cope with the loss. But a job offer in the coal mining town of Scarsdale presents one last chance, so father and son head north. The relocation is hard on Adam: the local boys prove difficult to befriend, and he never quite fits in. Meanwhile tensions between the miners and their employer, Sir John Scarsdale, escalate, and finally explode with terrible consequences.
In the aftermath, Adam’s fate shifts once again, and he finds himself drawn into the opulent Scarsdale family home where he makes an enemy of Sir John’s son, Brice, who subjects Adam to a succession of petty cruelties for daring to step above his station. However, Adam finds consolation in the company of Miriam, the local parson’s beautiful daughter with whom he falls in love. When they become engaged and Adam wins a scholarship to Oxford, he starts to feel that his life is finally coming together—until the outbreak of war threatens to tear everything apart.
From the slums of London to the riches of an Edwardian country house; from the hot, dark seams of a Yorkshire coal mine to the exposed terrors of the trenches in France; Adam’s journey from boy to man is set against the backdrop of a society violently entering the modern world.

You can purchase No Man’s Land *

SIMON TOLKIEN was born in England in 1959 and grew up near Oxford. His grandfather was J. R. R. Tolkien. He studied modern history at Trinity College, Oxford, and then went on to become a lawyer specializing in criminal justice. His novels include Final Witness, The Inheritance, and The King of Diamonds. He lives with his wife and two children in Southern California

No Man’s Land opens in turn of the century London with young Adam Raine living in the city with his parents. His mother is a woman who loves to read, appreciates music and the old ways. His father is a bit of a rabble rouser and very much a communist. He barely brings in enough money to feed the family and he is more concerned with the plight of every man than the plight of his family. When his wife dies as an indirect result of his activities he is devastated. He is left with his young son and really not much else. He writes to family, swallowing his pride, and asks for a job far from the city that has brought him nothing but grief.

He moves to coal country and tries to settle in. His cousin expects him to be the man he was but his wife’s death has broken something in him and he does work for the benefit of the miners but he is not the firebrand that he was. Young Adam has his own troubles fitting in as all of the young men in the town are off to work in the mines as soon as they are able but his father has different dreams for him – he is going to school so as to have a better life. This causes friction at times in his relationships with the other boys in town.

Life eventually settles into a pattern until there is a disaster at the mine that leads to a further disaster in which Adam loses his father. Before he dies though, he saves the life of the owner of the mine, Sir John and this leads to him inviting Adam to become his ward and move into the mansion. This is not appreciated by Sir John’s wife or younger son Brice, and they do not make Adam’s transition easy. It also doesn’t help that Adam and Brice have feelings for the same woman.

Sir John really comes to appreciate Adam’s work ethic. So does his elder son who is in the Army. Adam soon heads off to Oxford but just as he is feeling comfortable about life – World War I begins.  Adam heads home and soon he and his friends join the army and find themselves in France….in the Somme.

There is so much in this well written, well researched book. I was drawn in from the beginning and found myself rooting for Adam from the start. He is that type of character; the one you want to have good things happen to but you know that all is not going to go easy.  While this is a book about WWI, and it does spend a lot of pages in war time, it focuses more on character then it does on the carnage of the war. That is not to say that there is no blood and guts – there is, it just doesn’t overwhelm as some war books can.

It is a very compelling read full of rich descriptions that don’t stint on what life was like at this period in history. It is not easy to read at times, but no war book is. My only complaint is that the book was full of detail until it reached about three quarters of a way through and then it seemed as if the ending were rushed through. The last few chapters held a lot of defining plot points and they all wrapped up a little too neatly and a little too quickly. It was disappointing after all of the attention to timing a detail in the major portion of the book.

That small disappointment aside, this was a very good book and well worth reading.

The California Wife by Kristin Harnisch