I don’t read many non fiction books but having been called difficult a few times in my life Karen Karbo’s new book, In Praise of Difficult Women certainly intrigued.  I thank TLC Book Tours for sending me a copy at no charge for my honest review. 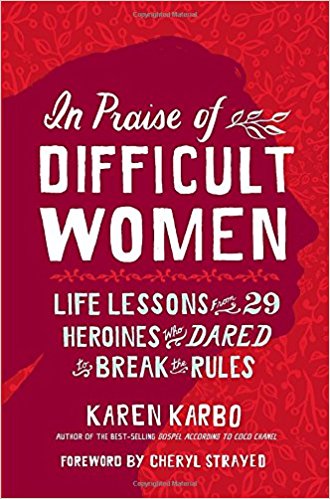 About In Praise of Difficult Women:

From Amelia Earhart to Carrie Fisher, this witty narrative explores what we can learn from the imperfect and extraordinary legacies of 29 iconic women who forged their own unique paths.

Smart, sassy, and unapologetically feminine, this elegantly illustrated book is an ode to the bold and charismatic women of modern history. Best-selling author Karen Karbo (The Gospel According to Coco Chanel) spotlights the spirited rule breakers who charted their way with little regard for expectations: Frida Kahlo, Nora Ephron, Hillary Clinton, Amy Poehler, Shonda Rhimes, Elizabeth Taylor, and Helen Gurley Brown, among others. Their lives–imperfect, elegant, messy, glorious–provide inspiration and instruction for the new age of feminism we have entered. Karbo distills these lessons with wit and humor, examining the universal themes that connect us to each of these mesmerizing personalities today: success and style, love and authenticity, daring and courage. Being “difficult,” Karbo reveals, might not make life easier. But it can make it more fulfilling–whatever that means for you.

KAREN KARBO is the author of multiple award-winning novels, memoirs and works of nonfiction. Her best-selling “Kick-Ass Women” series includes The Gospel According to Coco Chanel: Life Lessons from the World’s Most Elegant Woman, which was an international bestseller. Karbo’s short stories, essays, articles and reviews have appeared in Elle, Vogue, Esquire, Outside, the New York Times, Salon, and other publications. She is a recipient of a National Endowment for the Arts Fellowship in Fiction, and a winner of the General Electric Younger Writer Award. Karbo lives in Portland, Oregon, where she continues to kick ass.

It’s a time of change for women right now. They are speaking out and being well, difficult in ways they haven’t been in quite a few years. Where it will all lead, who knows but it is certainly an exciting time to be reading about female icons.

This isn’t a book about the conventional, exceptional women you might expect to find but rather women Ms. Karbo has found fascination. That is not to say that the profiles aren’t full of women who bucked their time and the system. They fall mostly in two categories; politicians and women in the arts (movie stars, broadway, performers, painters – you get the idea.)  There are a few outliers like Amelia Earhart and Ruth Bader Ginsburg. What you don’t find are the difficult women of science. My thoughts on this are that Ms. Karbo wrote what she knew and she was fascinated with these women – and there is nothing wrong with that. In fact it made for some really thought provoking essays.

I had a passing knowledge of most of the women profiled which speaks to their notoriety. I suspect, but I could be wrong, that younger women may not know as many on the list but the stories will bring these remarkable women to life for a new generation.

I do question the use of the word “heroines” because while all of  these women were indeed difficult, I am not sure that I would call Elizabeth Taylor and Lena Dunham for example, heroines. They both broke rules, they both certainly did what they pleased. Elizabeth Taylor was a talented actress with many, many problems. I don’t know a lot about Ms. Dunham but I know enough that I wouldn’t ascribe that description to her. There are others as well but I’m not going to go into all of them here.

When I sat down with this book I thought it would be one of those books where you read a chapter or two, then put it down and go to your other book. It is not. I found myself reading chapter after chapter just as if it were a fiction tale. That is a testament to Ms. Karbo’s writing. It’s easy, compelling and despite the fact that one chapter had nothing really to do with the next I just wanted to keep reading. And so I did. I read the book in one day as a matter of fact and then I went and googled the few women about whom I was unfamiliar. Then I googled some others for a deeper dive. Gotta love the google.

None of the women profiled are perfect. In fact, some of them are downright subversive. They all pushed the boundaries of their time and what was considered their place. They all have fascinating stories worth reading. Ms. Karbo tells them well.