A Romantic Getaway to Spokane, Washington

One of the things I miss most from living in New Jersey is Broadway. I’ve mentioned it before but it’s true. I love musicals. A couple of years ago the hubby took me into Spokane to see Wicked at the INB Performing Arts Center. It was nice to discover a place to go that wasn’t too far away. In fact Spokane is about the same driving time for us as New York was for us from where we lived in New Jersey. Of course the drive here is far more scenic. It was time for a little fun around these parts so I started looking for some. We were able to arrange a little romantic getaway to Spokane recently which was really nice. 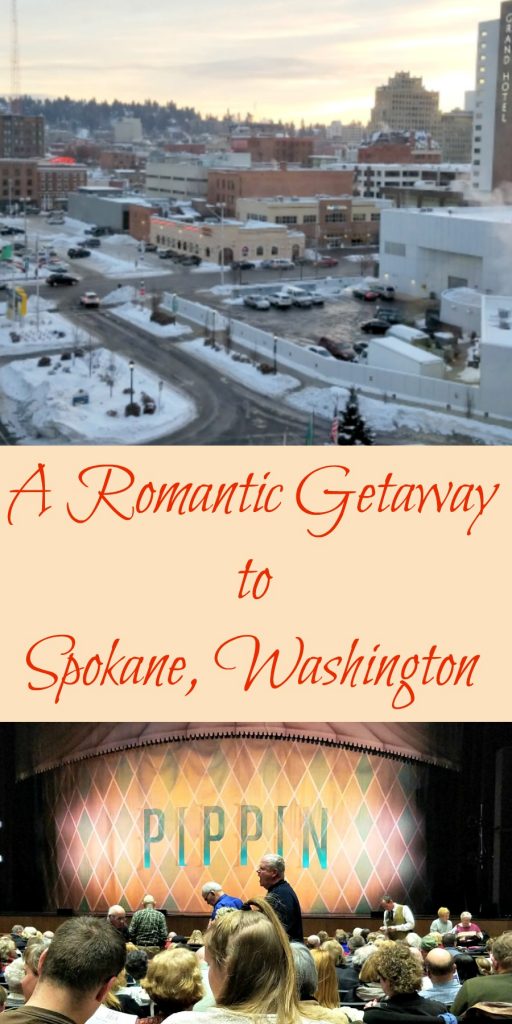 I try to follow the schedule at the INB Performing Arts Center but truth be told I sometimes forget to look. Fortunately I did get an email and discovered that Pippin was playing. That is a show that I truly enjoy and I knew it had gone through a total redo in 2013 or thereabouts and was all circus-y now. Tickets were purchased and I had a great show to look forward to. Given the time of year we decided to stay overnight because driving the passes in the dark during winter was just not something the hubby wanted to do. Those high mountain roads can ice up pretty quickly. 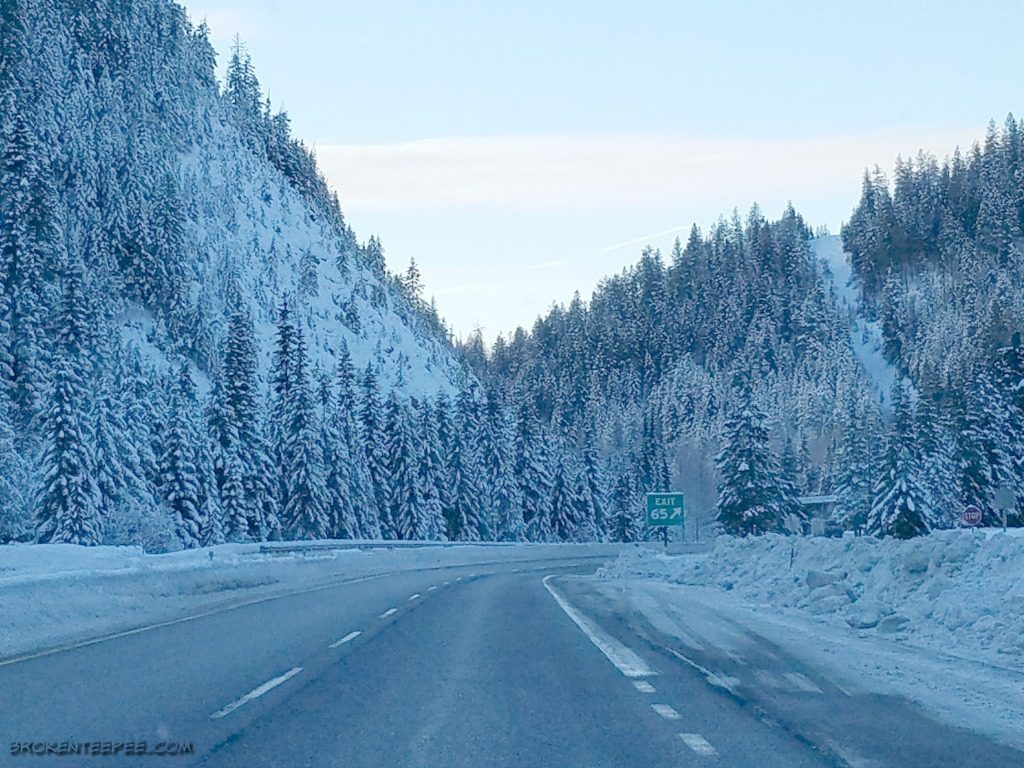 The drive to Spokane on a normal day is really pretty. This time of year it can be absolutely stunning. We’ve had a lot of snow and it hasn’t blown off the trees so it was like being in a snowfairy’s world. As we drove through the mountains I could see some branches that had about 5″ of snow on them. That was something I had never seen before. 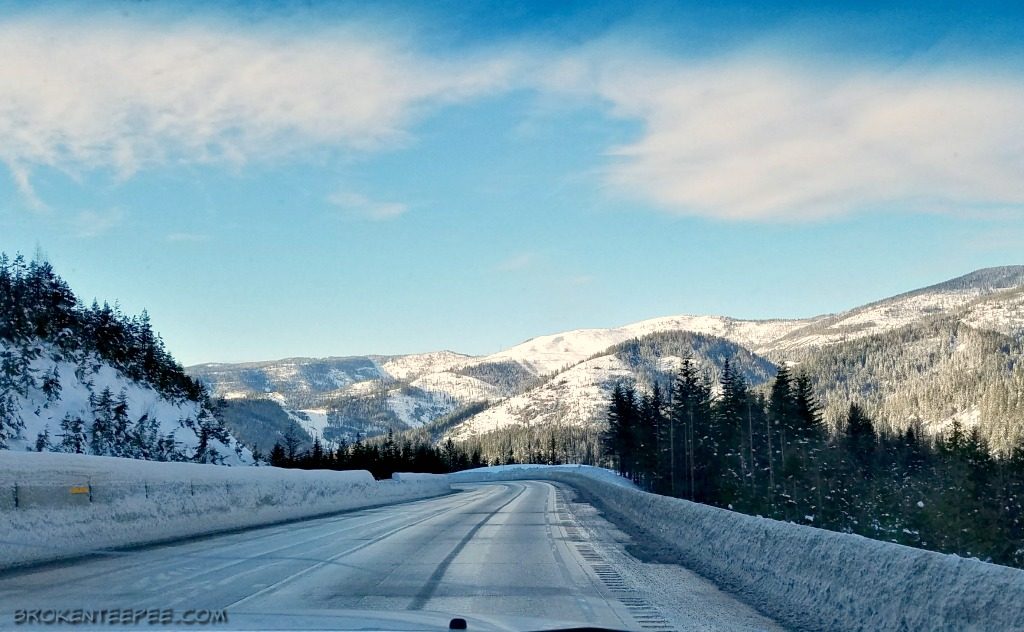 The ride through Idaho into Washington was just beautiful views after beautiful views. This part of the country is just so gorgeous. I know I keep writing that but it’s true. If you get the chance to come out here and see it for yourself you really should. 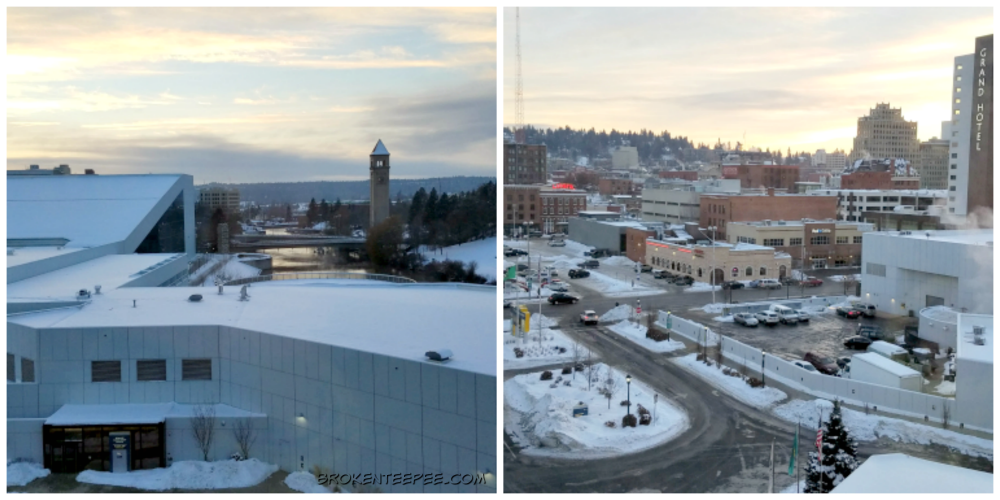 I had researched several hotels for our romantic getaway in Spokane and I settled on the Doubletree by Hilton Spokane City Center. They had a senior rate which made the cost not too bad and it was right next door to the theatre. We could walk which was an advantage over several of the other hotels I had looked at – they would have been walkable in the summer but not when the temps were supposed to be hovering around 0°. The view from our room, which had been advertised as “city view” was just that. It was a gorgeous overlook of center city and the Spokane River. 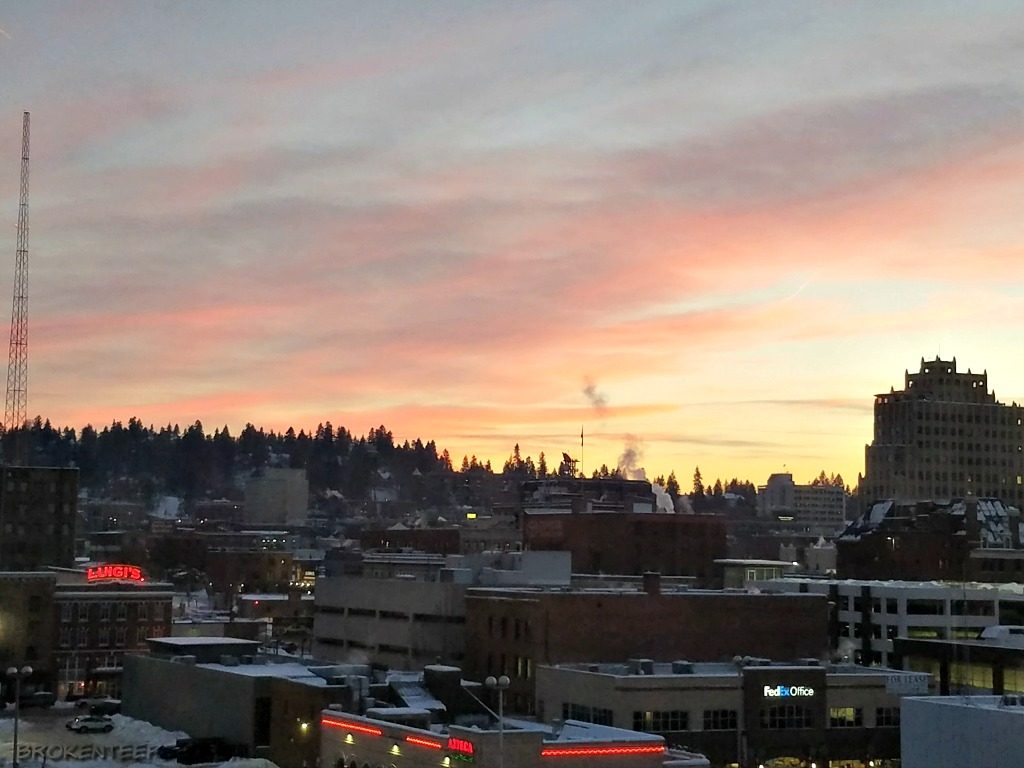 Check in was smooth and easy. The clerk was very friendly and yes, he did give us warm chocolate chip cookies upon arrival as the commercials advertise. They were very tasty and just what I needed after a three hour drive. We decided to eat after the play so we just got into the room and relaxed and read for a bit. As we left there was an amazing sunset out of our window. We watched it for a bit and then headed out into the cold. 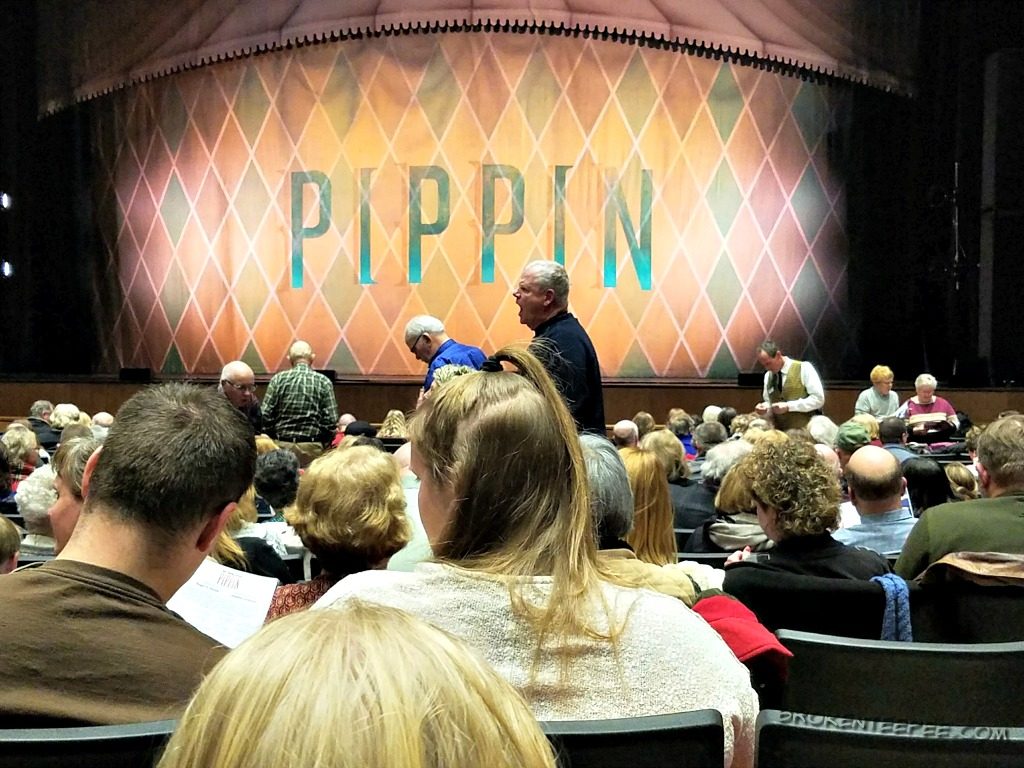 Changes had come to the theatre since our last visit; now bags are searched and you have to go through metal detectors. It’s really sad where things are right now but the lines moved quickly and were soon in our seats. The last time we went the acoustics were awful and we were hesitant about coming back. We purposely chose seats in a different area of the theatre and while better the sound was still not great.

The play was excellent with some truly powerful voices on the stage. I really commend this cast for all of the acrobatics! Every trick was performed perfectly and with seeming ease. It was a fun show and despite the sound issues we were glad we went. We will keep an eye on the schedule and go back if something catches our eyes.

After the show we went out to dinner at a pub called The Onion Taphouse and Grill. It was a little late at 9PM so the place wasn’t crowded which was nice. Our waitress was excellent. I had the fish and chips (cod) and the hubby had smoked salmon fettuccine Alfredo. My fish was fried perfectly – many people don’t realize how hard it can be to send out quality fried, well anything from a kitchen and my fish was beautifully done. It wasn’t greasy and the cod inside was flaky and moist. The fries were some of the best I’ve eaten. Hubby really enjoyed his dish as well. There was a very generous amount of salmon with fresh peppers in a creamy sauce. It wasn’t overwhelming and the pasta was cooked perfectly. We were both too full for dessert. I would go back in a heartbeat so that about says it all I think.

The next morning hubby had breakfast at the hotel. I had coffee – I just can’t eat in the morning. I wake up feeling ill every day and it takes me a while before I can even think about food.  He had scrambled eggs, bacon and fruit salad. He said everything was delicious. Our waitress was an absolute delight. 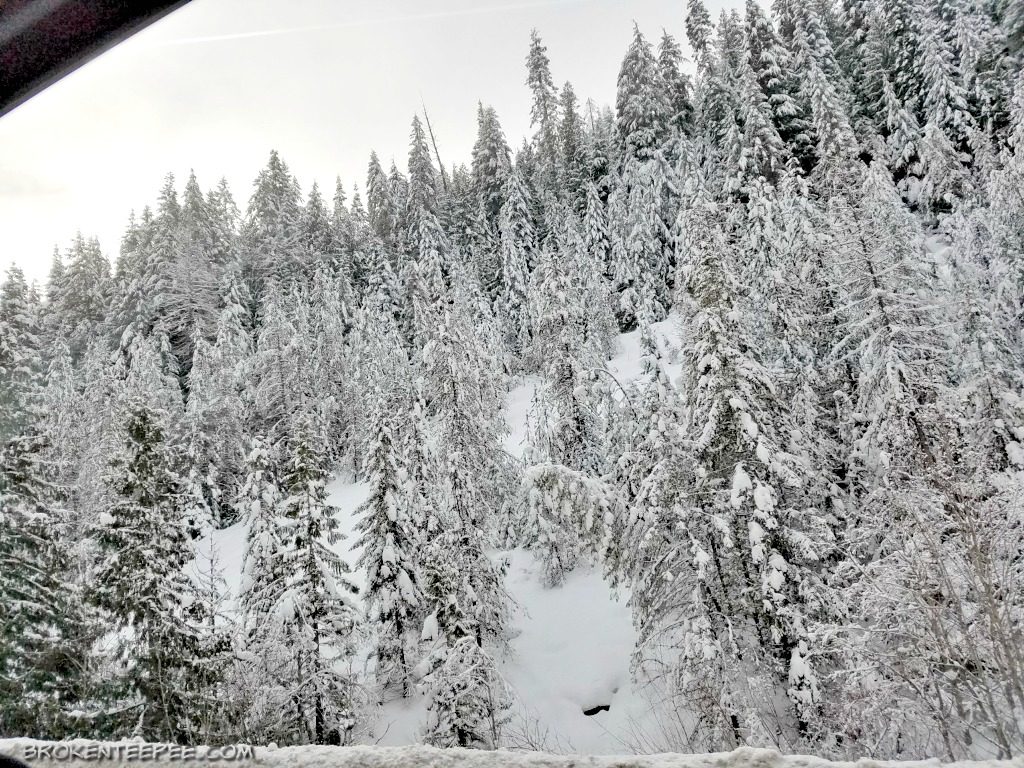 On the way home we stopped at the $50,000 Silver Dollar Restaurant and Bar in Haugen, Montana. I had a burger and the hubby had a Rueben. Both were good. Service was adequate. We’d both been seeing the billboards for this restaurant since we moved here but had never been in. We didn’t get back to the titular bar to see all of the silver dollars though.

It was nice to get home after our romantic getaway to Spokane. The cats were very happy to see us that was for sure. As we were driving back we discussed some day (or longer?) trips we’ll take when the weather turns to warm. We’re definitely going to go to Wallace and  Coeur d’Alene, Idaho. Both should be a lot of fun. We’ve been to both before but for very quick stops. I’d really like to explore so stay tuned for those trips later in the year.