I am pleased to bring you my thoughts today on Scatterwood by Piers Alexander. It is the continuing adventures of Mr. Calumny Spinks from the first book, The Bitter Trade. Mr. Alexander sent me a copy of the book at no charge for my honest review. 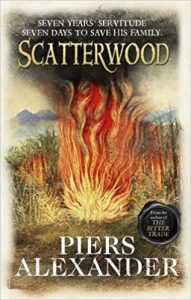 SEVEN YEARS’ SERVITUDE.
SEVEN DAYS TO SAVE HIS FAMILY

Jamaica, March 1692. Calumny Spinks is forced to spy for the Crown and help prevent an invasion of England. He’s sent to the Caribbean to pose as an indentured servant, but his best friend Ty brands him with the mark of a runaway and sells him to a brutal plantation overseer.

To win his family’s freedom, Cal must kill Lord Montalbion, the most powerful man in the Caribbean. He forges an alliance with the Maroons, escaped slaves whose plans for Cal could ruin everything – and meanwhile, a bloody civil war looms.

Piers Alexander is an author and serial entrepreneur. After a successful career as CEO of media and events companies he became a Co-Founder and Chairman of three start-up businesses. In 2013 he was awarded the PEN Factor Prize for The Bitter Trade. He is currently working on the sequel, Scatterwood, set in Jamaica in 1692.

Scatterwood continues the story of Calumny Spinks as he tries to care for his family in dangerous times in England. He is trying to sell coffee beans but is not having much luck. To make things worse he has stolen something important to his friend and he is carrying the guilt of it.  He thinks he finds a way out of both his growing poverty and the problem of the theft but he only finds himself in deeper difficulties.

Calumny is blackmailed into returning to Jamaica to spy on the governor but on the way he learns his mission is far more complicated and dangerous than he was first told. In fact his “friend” basically sells him into indentured servitude with the mark of a runaway on him. Fortunately Calumny is a bright man and he manages to deal with the hateful people running the plantations. He escapes and joins with a renegade band of men on the island.

Mr. Alexander brings the Island to life in its beauty and its horror. The sugar cane industry in the 17th century was slave driven and the plantation owners did not treat their slaves well – they were easily replaceable. In this tale our hero was working towards one goal so that he can reunite with his family. That goal seems a bit hard to achieve but nothing is going to get in his way.

I did feel that this book left a bit unanswered at the end. It’s hard for me to fully explain without giving away the ending but the epilogue seemed to come out of left field for me. It was almost as if my book had lost a chapter or two. Fortunately I have a good imagination. I do enjoy Mr. Alexander’s writing and I wouldn’t hesitate to pick up another book in this series should there be one.

You can read my review of The Bitter Trade