I received a free ecopy of Sketching Character for my honest review. 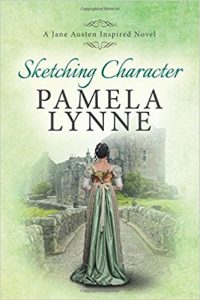 What if a tragic event involving a beloved sister shatters Elizabeth Bennet‘s confidence in her ability to accurately judge a person’s character? When she leaves Longbourn for Kent, Elizabeth’s heart is full of worry for those she left behind. She carries a secret that would ruin her family if exposed and she must deceive the ones closest to her to conceal the truth. She unexpectedly encounters Mr. Darcy on her journey and his gentlemanly behavior confuses, yet comforts her. Their daily encounters in the woods surrounding Rosings soothes Elizabeth’s weathered conscience and she soon falls in love. Her doubts, along with the well-placed words of another, threaten to destroy the peace she finds in Darcy’s company and she wonders if she has again failed to correctly sketch his character. When the truth behind her deception is uncovered, will Darcy shun her as Elizabeth fears, or will his actions prove that he is the very best of men?

Pamela Lynne grew up in the American South, surrounded by Southern Gothic works by Faulkner, O’Connor and the like. These authors helped shape her evolving mind and continue to influence everything she produces as an adult. It was a Regency-era wit from across the Atlantic, however, who seeped into her being.

She often describes her developing years as “Longbourn, The White Trash Version,” and credits Jane Austen for what little sense she brought away from that time. She has met her share of Willoughbys and Wickhams, Bingleys and Tilneys, and writes about them all.

Dearest Friends: A Jane Austen Inspired Novel, Pamela’s debut novel, won the Independent Publishers 2016 IPPY Awards Bronze Medal for Romance. This year, she began a personal journey, A Janeite Looks at Forty, where she documents her re-reading of Austen’s beloved works, comparing her thoughts now to those when she first discovered Austen over twenty years ago.

Pamela currently lives in the rolling hills of Tennessee with her husband of more than a decade, three kids, two cats and one very blond dog. She is still a Marianne hoping to grow into Elinor, or Clairee from Steel Magnolias.

This is an expounded Pride and Prejudice for lack of a better explanation. I knew there was a genre of books that took those Jane Austen classics and re-imagined them. I read one a while ago that took the core story but placed the characters in pre Civil War Texas. I get it – a good story, great characters and a huge audience of readers that love the stories. I will admit to enjoying Ms. Austen myself and while this particular story will stand on its own I do feel that an understanding of the underlying source material only enhances the reader’s enjoyment of the book.

In this version of the tale of Lizzie and her Mr. Darcy the fear of ruin hangs over the Bennet family. I’ll not share why or who or what but just know that in the time period many things could bring ruin to a young lady. It was a time of stricture for women but of course man could do whatever they pleased without risk of censure. Most of the familiar characters are present but don’t expect them to act as they do in the original. There are also some new faces!

I did enjoy the book and it’s alternate Pemberley universe. The book moved right along with highs, lows and some surprises. There were subplots just as in the original but as it is meant to be this is a love story between Elizabeth Bennet and Mr. Darcy.