Smoke in Her Eyes by Anna Belfrage – Book Review

In April I posted an excerpt of Smoke in Her Eyes by Anna Belfrage. I thank Ms. Belfrage for sending me a copy of her latest book at no charge for my honest review. I always look forward to her books. 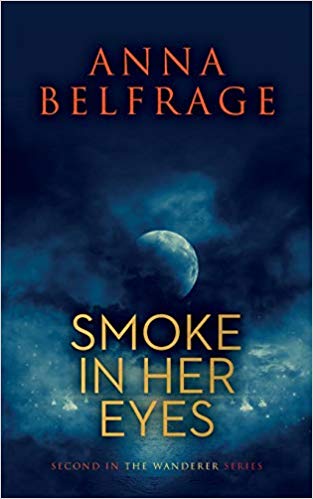 About Smoke in Her Eyes:

Six months ago, Helle Madsen would have described herself as normal. Now she no longer knows if that terms applies, not after her entire life has been turned upside down by the reappearance of not one, but two, men from her very, very distant past.

Helle Madsen never believed in mumbo-jumbo stuff like reincarnation—until she came face to face with Jason Morris, a man who purportedly had spent fifty lives looking for her. Coping with being reunited with the lover from her ancient past was one thing. Having Sam Woolf, her vindictive nemesis from that same ancient past join the party was a bit too much. Suddenly, Helle finds herself the reluctant heroine of a far-flung, time-transcending epic story, one in which pain and loss seem to play a very big part.

This time round, Jason and Helle are determined to make it to the happily ever after. Unfortunately, Sam Woolf will stop at nothing to crush them. That ride into the golden sunset seems awfully far away at times…

Her most recent release, A Torch in His Heart, is a step out of her comfort zone. Having previously published historical fiction & historical romance, with this first book about Jason anHelle Anna offers a dark and titillating contemporary romance, complete with a time-slip angle and hot & steamy scenes.

Her first series, The Graham Saga, is set in 17th century Scotland and Virginia/Maryland. It tells the story of Matthew and Alex, two people who should never have met – not when she was born three hundred years after him. With this heady blend of time-travel, romance, adventure, high drama and historical accuracy, Anna hopes to entertain and captivate, and is more than thrilled when readers tell her just how much they love her books and her characters. There are nine books in the series so far, but Anna is considering adding one or two more…

Her second series is set in the 1320s and features Adam de Guirande, his wife Kit, and their adventures and misfortunes in connection with Roger Mortimer’s rise to power. The King’s Greatest Enemy is a series where passion and drama play out against a complex political situation, where today’s traitor may be tomorrow’s hero, and the Wheel of Fortune never stops rolling.

If you want to know more about Anna, why not visit her website, https://www.annabelfrage.com

My Opinion of Smoke in Her Eyes:

I have been reading Ms. Belfrage’s books for many years now. I started with The Graham Saga and have now moved to this Wanderer Series. I enjoyed the first book in this series, A Torch in His Heart and am now pleased to continue with Smoke in Her Eyes. Just know that it is a very sexy book. Even more so than the first of the series.

Smoke picks up pretty much where Torch left off. Helle Madsen has learned that she is not an ordinary woman but rather someone who has been reincarnated through time over and over again along with two men; her love, Jason Morris and the man who wants to own and control her, Sam Wolfe. It all stems from a very ancient time when Helle refused Sam’s offer of marriage. She instead fell in love with Jason.

This has lead to them passing through time, missing each other but now finally reunited. The problem for Helle and Jason is that living happily ever after thing when Sam wants to capture Helle and kill Jason. Will they finally achieve that happiness they want?

These are three very compelling and equally strong characters.  It’s also a classic good vs evil story so the reader goes on that ride with the characters. For as one would hope that Good is going to ultimately triumph, Evil has a way of doing a lot of damage before that can happen. The third book comes out in the fall and I expect it will be as page turning and steamy a read as this one is.