Spirit Land The Peyote Diaries of Charles Langley: Against Witchcraft and Evil Ones – Book Review with Giveaway

Every so often a book just tickles my fancy even though it’s way out of my reading box. Spirit Land just intrigued me so I was happy to receive a free copy to review from Meryl Moss Media. I keep trying to stretch reading wise and I love that I have the opportunity to read such a wonderfully diverse array of books. 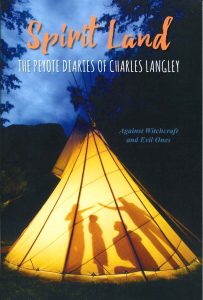 About Spirit Land The Peyote Diaries of Charles Langley: Against Witchcraft and Evil Ones:

This is the true story of Charles Langley, an Englishman from London, who became apprentice to a powerful Navajo Indian medicine man in the remote desert of the American Southwest. His early experiences of Navajo witchcraft, divination and healing, and of the visions induced by the peyote cactus, proved so remarkable and so other-worldly, he quickly realized that others would have difficulty believing them. Encouraged by the medicine man Blue Horse, and using skills honed as a top British journalist, Langley began to keep a detailed diary of the extraordinary events he witnessed in the company of this powerful American Indian medicine man. It is from these diaries, nearly half a million words in length– much of which must remain secret–that this compelling first person account has been crafted.

Readers will learn of the daily fight against witches and witchcraft. Of skin walkers, who are human shape shifters the Navajo believe can turn themselves into animals and birds; of visions, and of extraordinary feats of divination and healing, as well as fascinating insights into the unique culture of the Navajo tribe. As Blue Horse’s apprentice, Langley finds himself inhabiting a parallel world filled with exactly the kind of ancient mysticism and beliefs that his western upbringing and education have taught him to scoff at. But which increasingly become the everyday reality of his life. Eventually, he must choose either to continue his big city existence, with its comfortable lifestyle and preconceptions, or accept that the terrifying world of Navajo witchcraft is real and that, despite the risks, he must explore it to the end.

Langley said, “I once thought it was an accident that brought me here, now I’m not so sure.” He is grateful to the many Navajo people who helped with Spirit Land, and particularly wants to thank his wife Andrea, for her invaluable support, aid, and suggestions.

This is one man’s story of discovery. Mr. Langley traveled from his home in London to the American Southwest where he found himself drawn to the practices of the Navajo, in particular a Medicine Man known as Blue Horse. He immersed himself in the world – learning, receiving, giving, accepting, questioning and practicing. He came to love a society so removed from all he knew.

Spirit Land is easy to read and utterly fascinating but it isn’t a historian’s or a researcher’s book. It’s one man’s story of his experiences. It really is, as the title indicates, diaries. His tellings of the lessons he learned as he studies with the famous medicine man. There was much for him to learn and much more still and that leads to the one big question – does Mr Langley stay or does he go? The book doesn’t give that answer it sets up for another book so be on the lookout for that – I’m sure it will be as interesting as this one.

One lucky US reader from the LOWER 48 (no Alaska or Hawaii) will win a copy of Spirit Land. Just enter as many ways as you would like on the Gleam widget below. Full rules are on the widget. Good luck everyone.
Spirit Land