How excited am I to be reading about a chef in the Renaissance? I thank Atria Books for sending me a copy of The Chef’s Secret by Crystal King at no charge for my honest review. 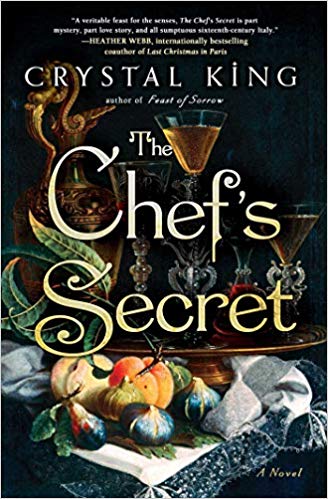 About The Chef’s Secret:

A captivating novel of Renaissance Italy detailing the mysterious life of Bartolomeo Scappi, the legendary chef to several popes and author of one of the bestselling cookbooks of all time, and the nephew who sets out to discover his late uncle’s secrets—including the identity of the noblewoman Bartolomeo loved until he died.

When Bartolomeo Scappi dies in 1577, he leaves his vast estate—properties, money, and his position—to his nephew and apprentice Giovanni. He also gives Giovanni the keys to two strongboxes and strict instructions to burn their contents. Despite Scappi’s dire warning that the information concealed in those boxes could put Giovanni’s life and others at risk, Giovanni is compelled to learn his uncle’s secrets. He undertakes the arduous task of decoding Scappi’s journals and uncovers a history of deception, betrayal, and murder—all to protect an illicit love affair.

As Giovanni pieces together the details of Scappi’s past, he must contend with two rivals who have joined forces—his brother Cesare and Scappi’s former protégé, Domenico Romoli, who will do anything to get his hands on the late chef’s recipes.

With luscious prose that captures the full scale of the sumptuous feasts for which Scappi was known, The Chef’s Secret serves up power, intrigue, and passion, bringing Renaissance Italy to life in a delectable fashion.

Crystal King is an author, culinary enthusiast, and marketing expert. Her writing is fueled by a love of history and a passion for the food, language, and culture of Italy. She has taught classes in writing, creativity, and social media at several universities including Harvard Extension School and Boston University, as well as at GrubStreet, one of the leading creative writing centers in the US. A Pushcart Prize–nominated poet and former co-editor of the online literary arts journal Plum Ruby Review, Crystal received her MA in critical and creative thinking from UMass Boston, where she developed a series of exercises and writing prompts to help fiction writers in medias res.She resides in Boston but considers Italy her next great love after her husband, Joe, and their two cats, Nero and Merlin. She is the author of Feast of Sorrow.

I knew I was going to be entertained by a book about food that took place in one of my favorite historical periods, the Renaissance. Bartolomeo Scappi was a real chef to various Cardinals and Popes in the 16th century.  Not much is known about him but he did leave one lasting legacy to history – he wrote a cookbook! It’s called Opera Dell’arte del Cucinare and it contains over 1000 recipes.

In this fictional tale Chef Scappi has died and leaves two keys to his apprentice Giovanni with instructions to destroy everything inside without reading it. But of course curiosity gets the best of Giovanni and read everything he does. What he learns shocks him! He thought he knew his mentor but there was much about him he did not know including the fact that Bartolomeo had deeply loved a woman for most of his life.

What follows is Giovanni’s search to find the truth of Bartolomeo’s life. As he reads the journals found in the boxes he finds they are in code he unlocks the cipher used and learns some shocking facts about the man he considered a father even though he was an uncle. He also finds himself in danger from a rival who wants the secrets of Bartolomeo’s recipes.

As Giovanni tries to move on with his life, find love and continue his cooking career in honor of his uncle he must keep himself and those he loves safe.

This was a very good book full of intrigue, love, passion and food. I loved it from the first page. I was drawn in by the atmosphere and by the tales of the big feasts. There were a number of subplots but they never got jumbled or lost in the midst of the main story.

This is a book for anyone that loves the Renaissance and cooking. It has a satisfying plot and great characters.

Share
Tweet
Pin18
Share
Email
Easy Salmon Recipe: Spiced Salmon on Sticky Rice with Honey Lemon Apples and Pomegranate
Can You Use an Automatic Pet Feeder for a Rabbit?