As I’ve noted I am trying to read more books that explore events in American history so when offered The Courage Between Love and Death by Joseph Pillitteri I accepted. It explores the Pan American Exposition and the assassination of President McKinley. I thank TLC Book Tours for sending me a copy at no charge for my honest review. 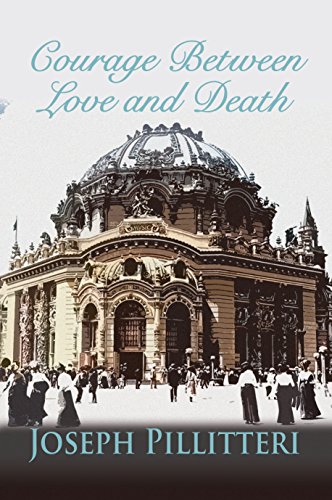 About The Courage Between Love and Death:

Elspeth has recently landed a nursing position at the 1901 Pan American Exposition Hospital in Buffalo, New York. This is a big boon for her, but things are not going as expected. She has to navigate mischievous patients, egotistical doctors, rival nurses and prejudices. For an Irish girl with a temper, this is no easy feat. Now President McKinley is coming to visit the Expo and everyone is in an uproar. On the home front, her life is no less hectic as she struggles to put food on the table and look out for her younger siblings.

When the unthinkable happens, it is a turning point, not only for the medical industry and our country’s security, but for Elspeth personally. With her career and reputation on the line, will she have the courage to overcome the challenges she faces to clear her name and continue to be there for the ones she loves?

While working at Roswell Park Memorial Hospital in Buffalo, NY, Pillitteri became intrigued by the role Dr. Park played in the surgery of President McKinley at the 1901 Pan American Exposition. He shaped facts and fiction together to tell the story.

The turn of the century Buffalo is not a friendly place for Irish immigrants.  (The history of this country and how it has treated various immigrants from different countries is long and ongoing.) Elspeth has been fortunate to secure a nursing position at the Pan American Hospital that was built as part of the Pan American Exposition. She comes from an impoverished family and her wages are necessary to help keep them from an even worse situation. But her true hope is to snag a rich husband for this will solve all of her family’s problems – or so she thinks. To this end she focuses all of her energies on a Doctor who doesn’t even see her, while not noticing the man who loved her upon first sight.

President McKinley is coming to visit the Pan American Exposition and while there Elspeth has interactions with the cream of society and Mrs. McKinley but not in the ways that she might hope. I’m not giving any spoilers here to write that Mr. McKinley is shot by an anarchist on his last day at the exposition. He is taken to the hospital on site but it is not an ideal place for the care he needs. As history tells us, he dies several days later from gangrene due to several issues but the main one rather shocked me as I was not aware of it so I will not reveal it here but rather tell you to read the book for the scenes in the operating room were some of the best in the novel in my opinion.

Elspeth is a good, solid character to be the center of this tale; she sits firmly in several of the circles that swirl around these events that led to Teddy Roosevelt becoming President. Mr. Pillitteri weaves her into the events very well and lets them happen around her using this character to keep things moving. She is not perfect by any means but she is a woman who is willing to sacrifice her happiness to protect her family. And she has a wicked sense of humor.

I enjoyed the book even though it was dealing with a horrific incident in history. The assassination was a big part of the story but to me it was Elsbeth’s tale more than McKinley’s.

One lucky US reader will win a copy of The Courage Between Love and Death. Just enter as many ways as you would like on the Gleam widget below.  Good luck everyone.